Exploring the Serious Work That Is Play 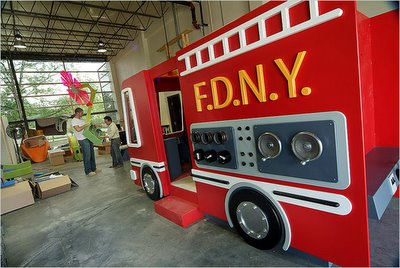 Via: The New York Times
By LAUREL GRAEBER
Published: August 8, 2006

The Children’s Museum of Manhattan plans to feature a reproduction of the “Mona Lisa” — along with a cave painting, an Egyptian painting, a Jackson Pollock and other significant artworks — on a wall in “PlayWorks,” its new 4,000-square-foot permanent exhibition for children under 5.

Beneath each image will be a second canvas, a textural and three-dimensional rendering, which a child can touch. And this installation will be just one in a series of interactive exhibits: a huge transparent wall whose surface is for fingerpainting; a climbing structure with hidden dioramas; a sand laboratory with buried “treasures”; a construction area for building gadgets; and, among many other displays, a mechanical baby dragon that will say words when children drop letters into its mouth. The exhibition’s emphasis is not the old saw that learning is fun, but that fun is learning.

“The idea is that in moments of everyday play children are really getting a tremendous amount of education,” said Kathy Hirsh-Pasek, a professor of psychology at Temple University and an author of “Einstein Never Used Flashcards,” a book whose title sums up the exhibition’s philosophy. In a telephone interview Dr. Hirsh-Pasek, an adviser to the project, said that the significance of play as a foundation for learning was “a critically important cultural message.”

It is a message the museum intends to take far beyond Manhattan. The $3 million “PlayWorks,” to open Sept. 21 in the museum’s building at 212 West 83rd Street, represents the start of its National Family Play and Learning Initiative, a program spanning several years in which the museum hopes to provide models for similar exhibitions nationwide. In late 2007 it plans to open a satellite version of “PlayWorks” in the South Bronx, the first step toward establishing a children’s museum in that borough.

“The steps are that we open ‘PlayWorks’ here, and we study it,” said Andrew S. Ackerman, the executive director of the Children’s Museum of Manhattan, during a recent tour of the building’s third floor, which has been completely gutted for the project. “With an advisory group we’ll look at the different ways we can replicate it nationally.