Saving the World, One Video Game at a Time 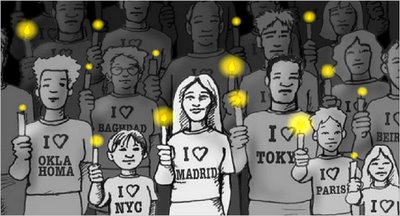 In the video game Madrid, players click on the candles to make them glow brighter

LAST week, in an effort to solve the Israeli-Palestinian crisis, I withdrew settlements in the Gaza Strip. But then a suicide bomber struck in Jerusalem, the P.L.O. leader called my actions “condescending,” and the Knesset demanded a stern response. Desperate to retain control, I launched a missile strike against Hamas militants.

I was playing Peacemaker, a video game in which players assume the role of either the Israeli prime minister or the Palestinian president. Will you pull down the containment wall? Will you beg the United States to pressure your enemy? You make the calls and live with the results the computer generates. Just as in real life, actions that please one side tend to anger the other, making a resolution fiendishly tricky. You can play it over again and again until you get it right, or until the entire region explodes in violence. 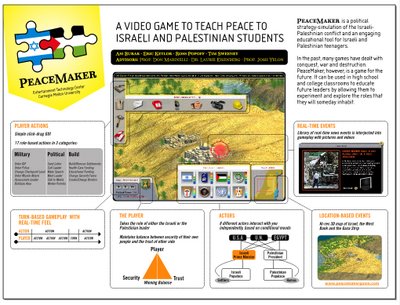 “When they hear about Peacemaker, people sometimes go, ‘What? A computer game about the Middle East?’ ” admits Asi Burak, the Israeli-born graduate student who developed it with a team at Carnegie Mellon University in Pittsburgh. “But people get very engaged. They really try very hard to get a solution. Even after one hour or two hours, they’d come to me and say, you know, I know more about the conflict than when I've read newspapers for 10 years.”

Video games have long entertained users by immersing them in fantasy worlds full of dragons or spaceships. But Peacemaker is part of a new generation: games that immerse people in the real world, full of real-time political crises. And the games’ designers aren’t just selling a voyeuristic thrill. Games, they argue, can be more than just mindless fun, they can be a medium for change.

The proposition may strike some as dubious, but the “serious games” movement has some serious brain power behind it. It is a partnership between advocates and nonprofit groups that are searching for new ways to reach young people, and tech-savvy academics keen to explore video games’ educational potential.

Together they have found some seriously high-powered backers. Last year the MacArthur Foundation began issuing grants to develop persuasive games, including a $1.5 million joint gift to James Paul Gee, a professor of educational psychology at the University of Wisconsin, and GameLab, a New York firm that designs games.

Meanwhile the United Nations has released Food Force, a game that helps people understand the difficulties of dispensing aid to war zones. Ivan Marovic, co-founder of Otpor (Resistance) — the Serbian youth movement widely credited with helping to oust Slobodan Milosevic — helped produce A Force More Powerful, a game that teaches the principles of nonviolent strategy. And the third annual Games for Change conference in New York, held earlier this month, attracted academics and nonprofit executives, including several from the World Bank and the United Nations.

“What everyone’s realizing is that games are really good at illustrating complex situations,” said Suzanne Seggerman, one of the organizers of the conference. “And we have so many world conflicts that are at a standstill. Why not try something new? Especially where it concerns young people, you have to reach them on their own turf. You think you’ll get their attention reading a newspaper or watching a newscast? No way.”

Henry Jenkins, an M.I.T. professor who studies games and learning, said the medium has matured along with the young people who were raised on it. “The generation that grew up with Super Mario is entering the workplace, entering politics, so they see games as just another good tool to use to communicate,” he added. “If games are going to be a mature medium, they’re going to serve a variety of functions. It’s like with film. We think first of using it for entertainment, but then also for education and advertising and politics and all that stuff.”

Given away free, they have found astonishingly large audiences. The United Nations game, Food Force, has been downloaded by four million players, a number to rival chart-busting commercial hits like Halo or Grand Theft Auto.

In May, MTV’S college channel released an online game called Darfur is Dying in which players escape the Janjaweed while foraging for water to support their village: despite its cartoonish graphics, a strangely powerful experience. In the first month alone 700,000 people played it. Of those, tens of thousands entered an “action” area of the game — political action, that is — where they can send e-mail messages to politicians and demand action on Darfur.

A Force More Powerful is considerably more complex. Players must make dozens of decisions as they try to foment democratic uprisings, but each action brings unexpected consequences. A huge demonstration may get your leaders arrested by the police, a boycott is safer but less effective, and so on.“The beauty of the game is that players can teach themselves by trying things out,” Mr. Marovic said. The game includes a disclaimer pointing out that not all tactics will work as well in the real world. But “people will learn certain principles,” he said, “like why to start with gentler tactics first and move to more aggressive ones only after you have popular support.”

This is the central conceit behind all these efforts: that games are uniquely good at teaching people how complex systems work. “You could have some big theory about society, but these days it’s like, sorry, people aren't going to read your white paper on it,” said Ian Bogost, an assistant professor at the Georgia Institute of Technology, whose book on serious games will be published next spring by M.I.T. Press. “Put it in a game, and they’ll discover what you’re talking about themselves.”

Video games, serious-games advocates say, also possess a persuasive element that is missing from books or movies: They let the player become a different person (at least for an hour or two), and see the world from a new perspective. When Mr. Burak first showed Peacemaker to Israelis and Palestinians, he found that they were most interested in playing as their own “side.” But when he pushed them to switch positions they developed a more nuanced sense of why the other side acted as it did. In Qatar several people told him that “they kind of understood more the pressures the Israeli prime minister has.”


Ben Sawyer, co-founder of the Serious Games Initiative — a group devoted to promoting the creation of persuasive games — worries that with so many nonprofit organizations rushing to get in on the action, some of the results are simply “bad games ones that are just boring,” he said. “There are a ton of them in this space.” Designing a fun game is hard enough; making it fun and politically nuanced is really tough.