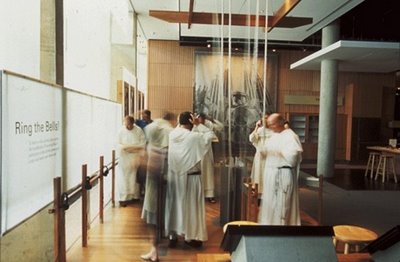 In their efforts to compete with other and more dynamic providers of information and entertainment, many museums are listening to their visitors more closely than ever before. In some cases museums—famously top-down institutions—are even incorporating the views, critical choices and contributed content of visitors into their programs. They are also re-examining the ways in which visitors interact with objects and spaces, as well as each other. For help with both of these approaches they are turning to a growing sector of the interactive design world; one that specializes in interactive museum displays.

Thus, the best interactive exhibits are open-ended. They encourage visitors to be active participants in the experience rather than passive consumers of information. They take their visitors’ views seriously and break down the hierarchy of institutions. So now, 30 years after Derrida and Foucault challenged notions of who controls texts and history, these issues are trickling down to the museum through tools like iPods. Which are just what you’ll be using soon to take the various self-guided architecture tours at the Hancock Shaker Village.

The audience takes over

Jake Barton, the principle of Local Projects, a design firm which has worked on interactive experiences like the StoryCorps project, tried to convince the Museum of the City of New York to do a show called “What Makes New York.”

The idea was to have New Yorkers themselves curate objects from the museum’s collection that reveal the secret to New York’s New Yorkness. “Only,” Barton says, “I got a lot of push back. One curator said, ‘well then can anyone put anything in a museum?’ and I’m like ‘why not?’”

His exhibit would have injected energy in the staid presentation of the objects by overlaying the curators’ official take on them with the visitors’ own ideas. This is just what David Small’s interactive table at the Churchill Museum in London aims to do.

“Interactive Table” at the Churchill Museum in London. Project by Small Design and Casson Mann.

Working with British exhibition designers Casson Mann, his firm, Small Design, created a device that lets visitors question all the patriotic pomp and circumstance you expect to accompany Churchill’s official life story. Using the table, visitors get to put together their own view of his life culling information from the more quotidian details—like his school reports and letters.

The 50-foot long table (or “Lifeline” as it’s called by the Museum) has 90 digital file folders, one for every year of Churchill’s life. Each folder has an additional 12 folders for each month filled with documents. People pick what they want to read so they can go as deep into his life as they want (or their time and patience will allow). The information is projected on the table from below by 13 video projectors so it looks seamless. Walk up to 1932, for instance, and touch the side of the table, (it works with a finger not a mouse or a pointer) select a date and see what happened. The files even include other historical events which give broader context to the personal material, so there’s a film from the day the first washing machine was sold in the UK at Selfridges, and when you open the file for the Titanic’s sinking, the whole table seems to go down. Among the thousands of documents are even such banal ones as Churchll’s first report card from 1882. The fact that he came bottom of the class is somehow deeply humanizing. But despite the fact that visitors get to curate their own narratives about Britain’s most famous prime minister, their choices are largely pre-determined. The information is in a context and is only one element of the show. 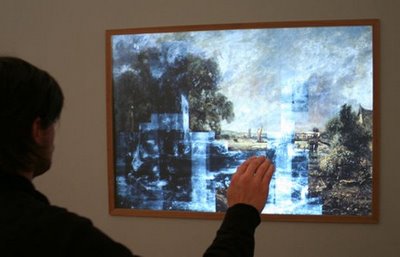 Tate Britain is taking the idea of letting the audience provide the content for the exhibition one step farther. Seen as the stodgy cousin of the new, hip and architecturally fabulous Tate Modern, Tate Britain has shaken its role as the unloved relative to become more inventive and radical. Its outreach already includes projects like themed guides to the collections for hangovers, first dates—getting dumped even. And now they’re they’ve hired the firm AllofUs to take on interactive displays. After projects for London’s Science Museum and interactive shop windows for Selfridges (the same store that sold the first washing machine) even an interactive forest for the ICA where the trees grew leaves if you sang to the mushrooms, AllofUs came up with a display that lets people draw. Part of a small show pairing artist William Blake and his friend John Flaxman’s illustrations, the interactive drawing tool hardly looked like a kiosk. 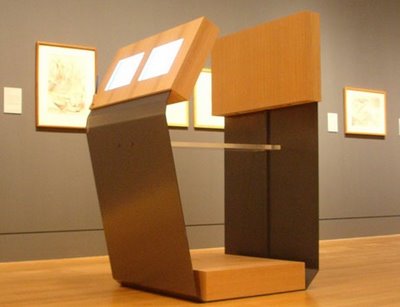 AllOfUs’s kiosk for the William Blake and John Flaxman exhibition at the Tate Britain Museum.

Instead it was built from English oak and steel and stands like an elegant piece of furniture in the middle of the room. Because both Flaxman and Blake believed in the primacy of drawing, purity of line was the display’s focus. It used Flash, Director and a Wacom drawing tablet (framed in the oak so that it matched the frames in the rest of the gallery) to allow visitors to trace a highly magnified image of a Flaxman drawing. The idea was to let visitors feel for themselves what it might have been like for Flaxman to draw. Because the person drawing only saw a small detail, the illustration was reduced to simply a curve or an angle, to the line itself. Using 21st century technology, people got to experience an 18th century mindset where, as James Davis explains, “tracing was an essential skill worth perfecting and not associated with copying or cheating as might be thought of today.” 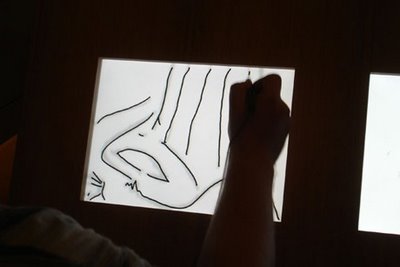 AllOfUs’s kiosk for the William Blake and John Flaxman exhibition at the Tate Britain Museum.

While audience participation is used to reinforce ideas, it’s also used to create exhibits themselves. Sometimes actually in real-time. That’s what happens at the Pope John Paul II Cultural Center in Washington DC, which implemented what one of its designers, d’Arcangelo, calls “an out-there concept.” 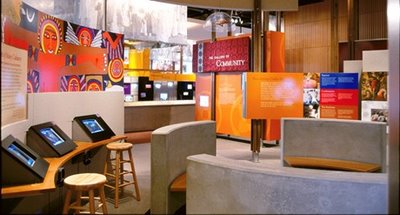 ESI decided to put faith, and peoples’ various interpretations of faith at the very core of their solution. “We wanted to make a place that felt under construction. When we opened the doors to the public, we wanted it to feel like we were just getting started, and that the visitors would need to help finish it, and participate, like they do online.” The galleries include private spaces, or booths, where visitors are asked to create testimonials of their own experience of faith. People can draw, make a video, type a story, or record audio. If they choose to share it, their testimonial is filtered then and there by a curator who adds it to the gallery, so the exhibit continually tells the stories of that day’s visitors, and the center feels like a continuing tapestry of individual faith rather than some didactic explanation of the pope’s life. 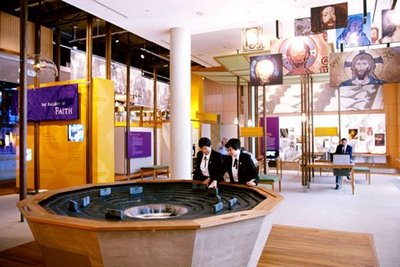 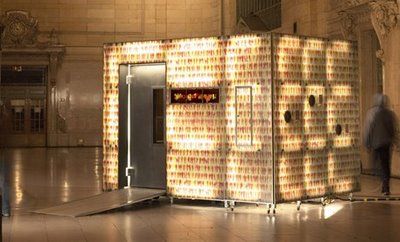 Visitor participation could almost be called Jake Barton’s stock-in-trade. He worked on StoryCorps, David Isay’s visionary project where visitors interview their friends and family members, creating in aggregate an oral history of average Americans’ amazing stories. The best get played on NPR, and all are collected by the Library of Congress. Each visitor leaves with a CD recording of their story. Though it’s a hugely interactive experience, there are virtually no computers to interact with in the booth itself, no telling your story to a screen. In fact, with its wood paneling, the booth looks almost like a den, and the only devices that feel like an exhibit display are outside the box, on the sides where you can hear some of the stories and see pictures of participants.


As Barton says, “The most expensive interactive device is a person.” He thought automating the process too much would intimidate people and produce stiff responses, so a person always mans the booth, talking visitors through the recording process. “We were designing the experience of how you prepare for the interview and what you do in the booth. It wasn’t just about interviewing and participating, it was about creating quality content.” Also, he adds, “We wanted it to be subversive. We wanted it to be about communication between two people who may not otherwise be able to talk to each other. We wanted to build this booth where you could ask your grandfather all these questions you usually couldn’t, but because you were in the booth, it mediated the relationship.” 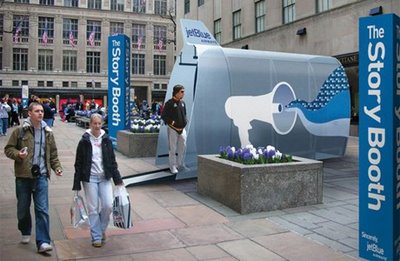 Real, live, in-the-flesh people are an essential part of his other oral history projects for Jet Blue (passengers’ tales are told in a fuselage booth and the best turned into ads) and the Miners Story Project (their oral histories are being collected in a vintage Airstream traveling the Southwest for the Flandrau Science Center in Tucson, Arizona). Barton and d’Arcangelo have also both been taking these strategies beyond museum walls to try to integrate visitor participation into shopping. 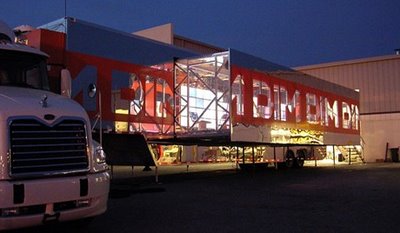 Local Projects’ collaborated with Lo/Tek and Inbar Barak on the “DIM” project.

ESI has been working with big box retailer Best Buy while Barton was part of a team including edgy architects Lo/Tek and media designer Inbar Barak to create a concept shop for Sara Lee. Called the Dimobile, it sold H&M-style clothes to kids in their teens and early twenties. As Barton explains, “The company didn’t know how to do that but wanted to use guerilla marketing and all these social software strategies to create viral media to draw attention to the brand itself.”

Basically Sara Lee wanted to take fashion on the road, with the mobile store rolling up in different towns for a week or two. Inside, it didn’t have any traditional signage. Instead it used over 200 flat-screen monitors, so the images could be updated bi-weekly when new stock came in. Another way in which everything was made to feel real and personalized was the fact that the customers themselves were the models. When they opened drawers to look at the clothes inside, shoppers were asked if their picture could be taken. It would be stamped with the date and location and added to the store’s walls, creating a Dim community—almost like MySpace in literal space. 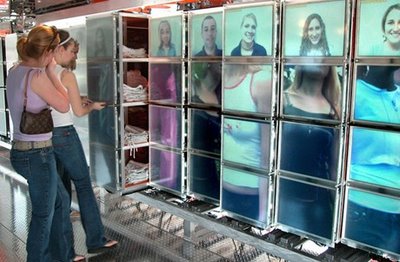 Local Projects’ collaborated with Lo/Tek and Inbar Barak on the “DIM” project.