Tangible user interfaces’ (TUIs) typically use manipulable objects, rather than keyboard and mouse, to interact with software operations. Systems thinking is a holistic way of looking at the world; to learn systems thinking at an early age offers children new perspectives on the world, and develops the cognitive skills needed to organize, represent and interpret how the world works. This project aims to provide children with TUIs which will allow them to understand the core principles of systems thinking at young age. It comprises a main project, Power Eco-Pods, and three smaller research explorations: Mini Eco-Pods, Light-Wall, and Eco-Sim.


Power Eco-Pods is a game program, supplied with two ‘pods’ which plug into any personal computer. It teaches children about the complex interactions of natural phenomena, thus introducing them to systems thinking.

The computer screen shows a landscape with the sun, clouds and a flower. Children hold two egg-size ‘pods’: one, representing the sun, lights up when ‘warmed’ in the hands; blowing on the other, representing wind, turns a small internal windmill. When turned in the hand, each pod moves the on-screen sun or blows the clouds. An internal algorithm mimics, in simplified form, the ‘systemic’ interaction between natural phenomena. If the wind clusters the clouds they precipitate on-screen rain but hide the sun, for instance, and too little or too much rain or sun endangers the flower’s apparent health, causing it to droop. The aim of the game is to infer the system’s behaviour and keep the flower blooming. 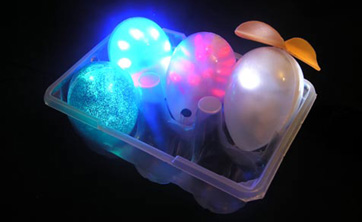 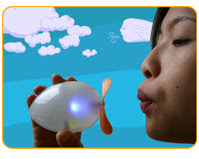 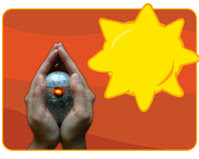 Unlike keyboards and joysticks, tangible user interfaces introduce into game-playing the physical immediacy, bodily activity, and potential for suggesting meaning, associated with traditional toys and models. They are thus particularly appropriate for representing concrete scenarios (here the interaction between natural elements and plants) and, through this, abstract ideas (here systems-thinking concepts like feedback loops, interconnectedness and change over time). Technically simple to manufacture, the game will be mostly bought by parents and schools.