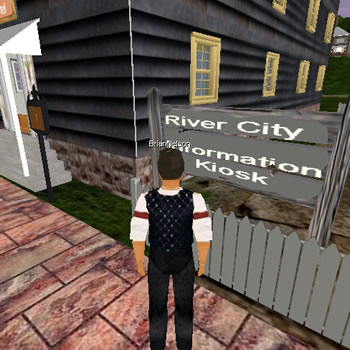 At mid-December's Horizon Forum meeting, Chris Dede delivered a presentation via Skype on using multiple-user virtual environments in educational contexts. These environments, he argues, allows students to co-design and co-instruct their own educational experiences, allowing for guided social constructivism and learning that goes beyond what traditional schools try to accomplish through test-based assessments.

With the pace of change accelerating, schools, by design, are not able to keep up with society. Schools are in danger of becoming irrelevant unless if they do away with reactionary, compliance-based management and build future-oriented, proactive (and preactive!) leadership. 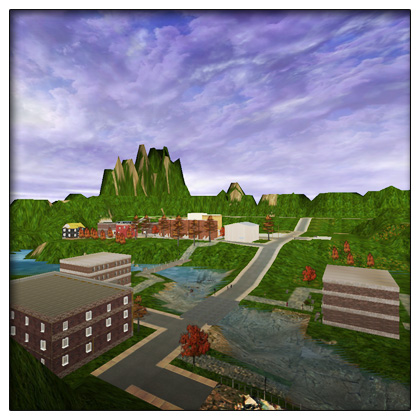 The River City Project, a National Science Foundation-supported simulation environment for learning scientific inquiry and 21st century skills. River City is an interactive computer simulation of a river town, based in the late 1800s, that combines digitalized Smithsonian artifacts with an inquiry-centered curriculum to engage middle and high school students. 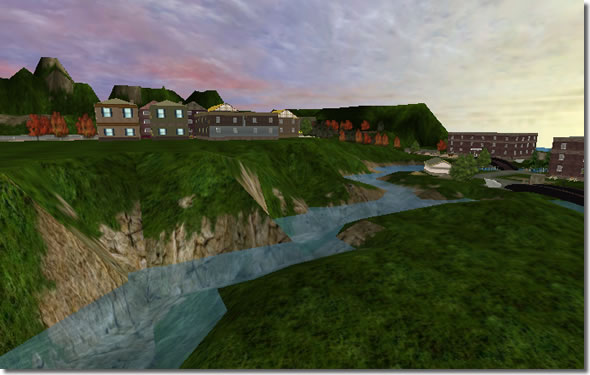 As visitors to River City, students travel back in time, bringing their 21st century skills and technology to address 19th century problems. River City is a town besieged with health problems. Students work together in small research teams to help the town understand why so many residents are becoming ill. Students use technology to keep track of clues that hint at causes of illnesses, form and test hypotheses, develop controlled experiments to test their hypotheses, and make recommendations based on the data they collect, all in an online environment. 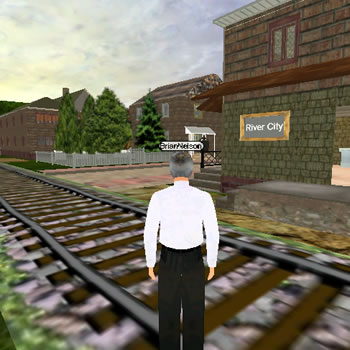 Situated learning, a major theory about cognition and education, centers on apprenticeship in "communities of practice" (moving from newcomer to expert within a sociocultural structure of practices). MUVEs are a promising medium for fostering and assessing classroom-based situated learning because they can support immersive, extended experiences incorporating modeling and mentoring about problems similar to those in real world contexts.

This project extended an educational MUVE developed with prior NSF funding; its curriculum is based on a problem-solving community in which students gain knowledge through co-interpreting data with other participants who have varied levels of skills. This project will study whether such a virtual environment can sufficiently replicate authentic contexts and multi-leveled communities of practice to provide students with classroom experiences in situated learning.

This project developed and studied multiple variants of a learning environment in which these vectors are manipulated, allowing investigation into near and far transfer. The project will develop MUVE-based curricula centered on alternative models of situated or constructivist learning and will assess their differential outcomes for student motivation and learning, as well as interface usability and classroom implementation.

The River City curriculum unit is based on students collaboratively investigating a virtual "world" consisting of a city with a river running through it, different forms of terrain that influence water runoff, houses, industries, and institutions such as a hospital and a university. River City contains over fifty digital objects from the Smithsonian's collection, plus "data collection stations" that provide detailed information about water samples at various spots in the world. 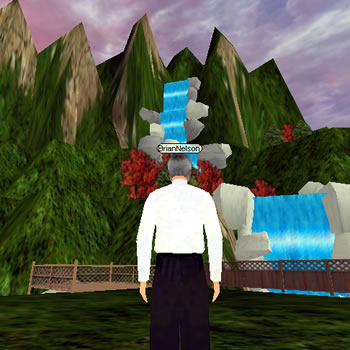 River City is typical of the United States in the late nineteenth century; it uses museum artifacts to illustrate building exteriors and street scenes from that period in history. 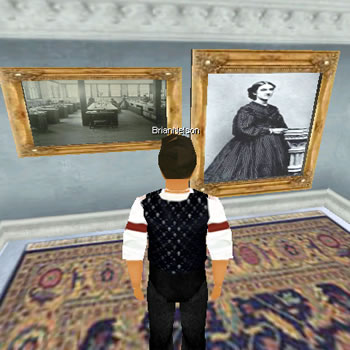 Content in the right-hand interface-window shifts based on what the participant encounters or activates in the virtual environment. Dialogue is shown in a text box below these two windows; members of each team can communicate regardless of distance, but in-team dialogue is displayed only to members of that team. To aid their interactions, participants also have access to one-click interface features that enable the avatar to express (through stylized postures and gestures) emotions such as happiness, sadness, agreement, and disagreement. Multiple teams of students can access the MUVE simultaneously, each individual manipulating an avatar through their computer. 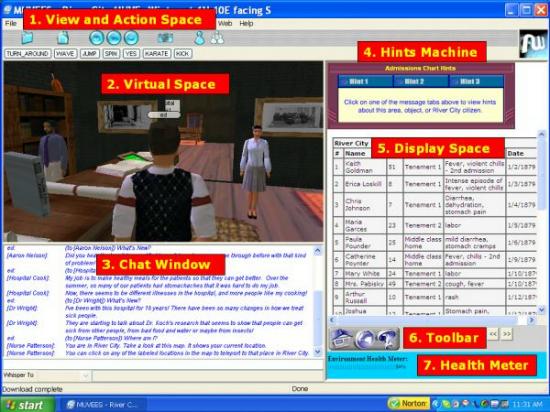 In pilot implementations, each class was divided into teams of two to four students, which are "sent back in time" to this virtual environment. During their time in the MUVE, students answer questions in a Lab Notebook, which the teachers later use for assessment purposes. The Lab Notebook starts with questions that guide exploration of the environment and develop mastery of the interface, building towards later investigations that are content specific and require completing a data table or graph based on the water samples encountered in River City. The Lab Notebook asks the class to help the city solve its environmental and health problems, which are directly related to middle school science content. To accomplish this, the students must collaborate to share the data each team collects.

Beyond textual conversation, students can project to each other "snapshots" of their current individual point of view (when someone has discovered an item of general interest) and also can "teleport" to join anyone on their team for joint investigation. Each time a team reenters the world, several months of time have passed in River City, so learners can track the evolution of local problems. 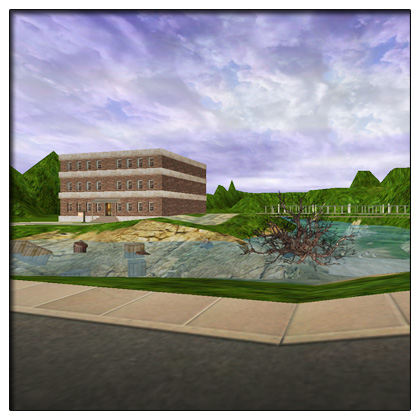 At the end, students write to the mayor of River City describing the health and environmental problems they have encountered and suggesting ways to improve the life of the inhabitants. Learners are engaged in a "participatory historical situation" in which they can apply tools and knowledge from both the past and the present to resolve an authentic problem. In this "back to the future" situation, students' mastery of 21st century classroom content and skills empowers them in the 19th century virtual world.