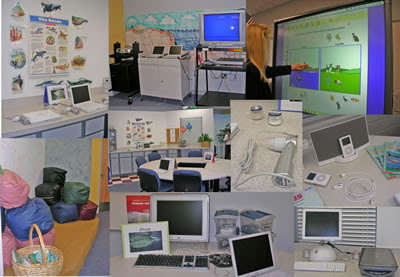 Following my previous post Serious Games Fostering Networked Education and inspired by TIME's Cover Story: How To Build A Student For The 21st Century, posted on December 10, 2006. 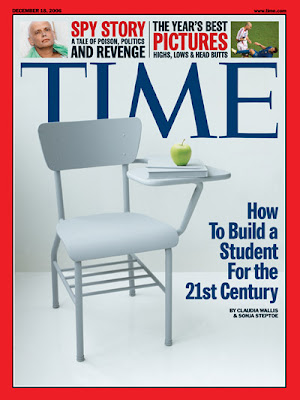 TIME's Cover Story addresses quite a few challenges imposed by the rethinking of American education.

For the past five years, the national conversation on education has focused on reading scores, math tests and closing the "achievement gap" between social classes. This is not a story about that conversation.

This is a story about the big public conversation the nation is not having about education, the one that will ultimately determine not merely whether some fraction of our children get "left behind" but also whether an entire generation of kids will fail to make the grade in the global economy because they can't think their way through abstract problems, work in teams or distinguish good information from bad.

The conversation that will burst onto the front page, when the New Commission on the Skills of the American Workforce, a high-powered, bipartisan assembly of education secretaries, business leaders and a former governor releases a blueprint for rethinking American education from pre-K to 12 and beyond to better prepare students to thrive in the global economy.

While that report includes some controversial proposals, there is nonetheless a remarkable consensus among educators and business and policy leaders on one key conclusion: we need to bring what we teach and how we teach into the 21st century. 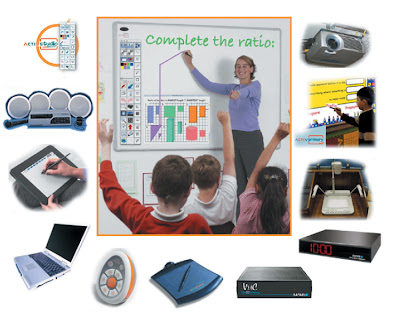 Right now we're aiming too low. Competency in reading and math -- the focus of so much No Child Left Behind testing -- is the meager minimum. Scientific and technical skills are, likewise, utterly necessary but insufficient. Today's economy demands not only a high-level competence in the traditional academic disciplines but also what might be called 21st century skills. Here's what they would be:

The skills commission will argue that it's possible only if we add new depth and rigor to our curriculum and standardized exams, redeploy the dollars we spend on education, reshape the teaching force and reorganize who runs the schools.

I would argue in turn that all than above mentioned skills can be highly leveraged by playing games. 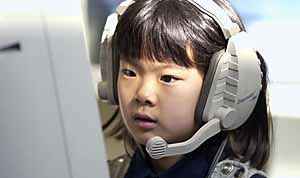 "Any observer knows that the attitude of today s children to video and computer games is the very opposite of the attitude that most of them have toward school. The amount of time they spend playing computer and video games estimated at 10,000 hours by the time they are twenty-one, often in multi-hour bursts belies the short attention span criticism of educators. And while years ago the group attracted to video and computer games was almost entirely adolescent boys, it is now increasingly girls and all children of all ages and social groups. One would be hard-pressed today to find a kid in America who doesn t play computer or video games of one sort or another."

"The evidence is quickly mounting that our Digital Native children s brains are changing to accommodate these new technologies with which they spend so much time. Not only are they better at spreading their attention over a wide range of events, as Green and Bavelier report, but they are better at parallel processing, taking in information more quickly (at twitchspeed ), understanding multimedia, and collaborating over networks."

"What attracts and glues kids to today s video and computer games is neither the violence, or even the surface subject matter, but rather the learning the games provide. Kids, like and all humans, love to learn when it isn t forced on them. Modern computer and video games provide learning opportunities every second, or fraction thereof."

"On the surface, kids learn to do things to fly airplanes, to drive fast cars, to be theme park operators, war fighters, civilization builders and veterinarians. But on deeper levels they learn infinitely more: to take in information from many sources and make decisions quickly; to deduce a game s rules from playing rather than by being told; to create strategies for overcoming obstacles; to understand complex systems through experimentation. And, increasingly, they learn to collaborate with others. Many adults are not aware that games have long ago passed out of the single-player isolation shell imposed by lack of networking, and have gone back to being the social medium they have always been on a worldwide scale. Massively Multiplayer games such as EverQuest now have hundreds of thousands of people playing simultaneously, collaborating nightly in clans and guilds."

"Today s game-playing kid enters the first grade able to do and understand so many complex things from building, to flying, to reasoning that the curriculum they are given feel like they are being handed depressants. And it gets worse as the students progress. Their Digital Immigrant teachers know so little about the digital world of their charges from online gaming to exchanging, sharing, meeting, evaluating, coordinating, programming, searching, customizing and socializing, that it is often impossible for them to design learning in the language and speed their students need and relish, despite their best efforts."

"An emerging coalition of academics, writers, foundations, game designers, companies like Microsoft and, increasingly, the U.S. Military is working to make parents and educators aware of the enormous potential for learning contained in the gaming medium. While edutainment, may work for pre-schoolers, it is primitive when it comes to the enormous sophistication of today's games. We need new and better learning games, and these are finally beginning to appear. Microsoft has sponsored a Games-to-Teach project at MIT which is building games for learning difficult concepts in physics and environmental science on the X-Box and Pocket PC. Lucas Games has lesson plans to help teachers integrate its games into curricula to teach critical thinking. A UK study by TEEM (Teachers Evaluating Educational Multimedia) has shown that certain games can help youngsters to learn logical thinking and computer literacy. Given the almost perfect overlap between the profiles of gamers and military recruits, the US Military uses over 50 different video and computer games to teach everything from doctrine, to strategy and tactics."