Getting Your Body Into Serious Games 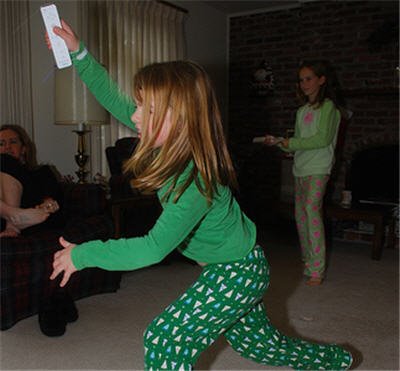 Playing video games has never been considered exercise, but researchers at the Mayo Clinic have issued a study expressing tacit approval for the concept behind Nintendo's new Wii video game console.

The researchers concluded that, if kids are going to spend hours playing video games, it's better for them to play games that require them to move, rather than just sit on the couch.

The study is published in the current issue of the medical journal Pediatrics.
"We know if kids play video games that require movement, they burn more energy than they would while sitting and playing traditional screen games. That's pretty obvious even without our data," says Lorraine Lanningham-Foster, Ph.D., Mayo obesity researcher and study leader.

"The point is that children -- very focused on screen games -- can be made healthier if activity is a required part of the game."

The research does not mention the Wii by name, but Nintendo marketers will no doubt be quick to seize on its findings. The Wii, introduced in November, uses a motion sensitive wireless controller, requiring players to simulate swinging a tennis racket or rolling a bowling ball.

Players have been so active in playing the games that Nintendo has been forced to recall the controllers to add sturdier straps, to keep players from flinging the controllers across the room.

The study is the first to scientifically measure the energy spent playing video games. While the study's scope is small -- only 25 children the research team says it was conducted with great accuracy. Fifteen children were of normal weight for their height and frame; ten were mildly obese.

The results showed that sitting while watching television and playing traditional video games expended the same amount of energy. When participants played with the first activity-oriented video game, one that uses a camera to virtually "place" them in the game where they catch balls and other objects, their energy expenditure tripled.

While using a dance video game, both groups burned the most calories, but it was considerably more for the obese group -- just over six times more than sitting still.

The researchers say children now average eight hours a day in front of a TV screen, either playing video games or watching TV. The study suggests requiring activity in more video and computer games is one potential approach for reversing the obesity trend. Despite the small sample in this study, the researchers said they consider the findings robust and say that they warrant further studies in randomized trials.