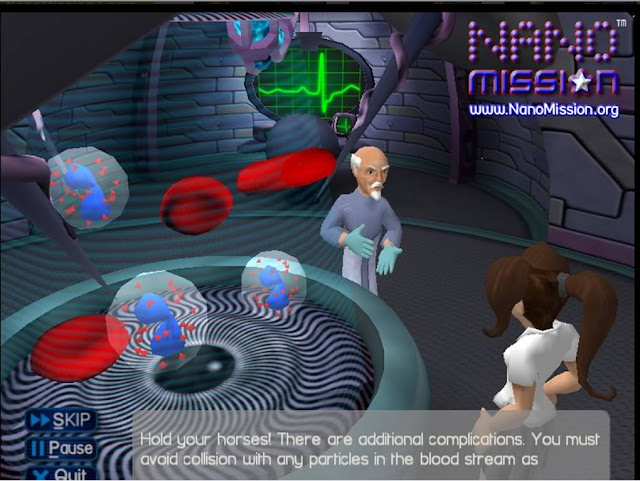 Following my November's post NanoWars: Serious Games To Understand Nanotech, the re. game was rebranded to NanoMission :: Learning Nanotechnology through Games. 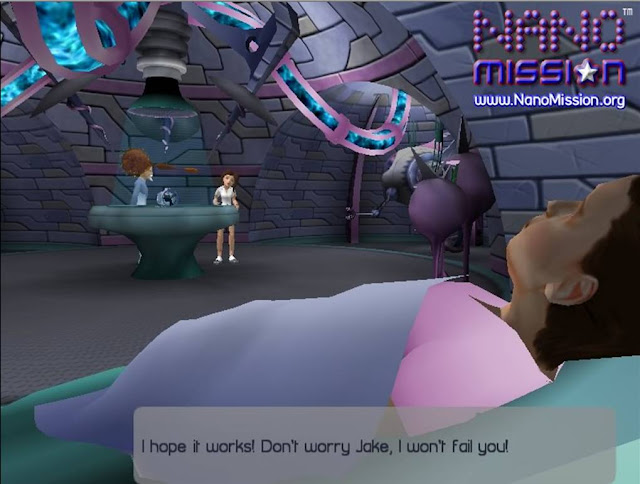 Officials from London-based developer PlayGen and global nanotechnology consultancy Cientifica have announced the release of a playable demo of NanoMission, an educational serious game that aims to teach players about the concepts of nanoscience through real world practical applications from microelectronics to drug delivery. 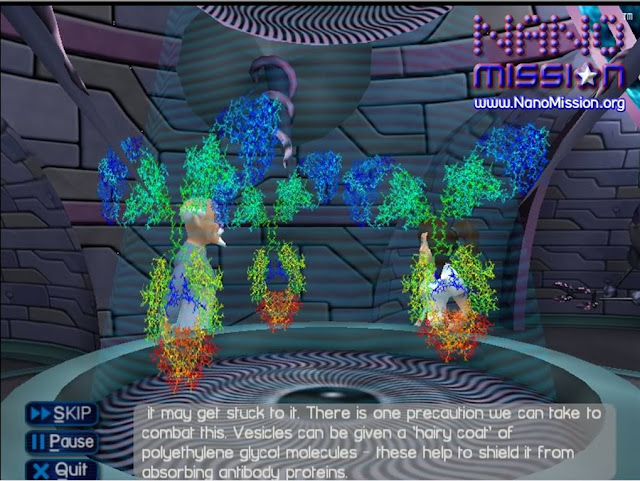 Available now from the game's official website, the demo offers a look at NanoMission's first module, nanomedicine, which lets the player to select a suitable vehicle to deliver an anti cancer compound, and then navigate through the bloodstream to the site of the tumor, while avoiding the bodies’ natural defense mechanisms. 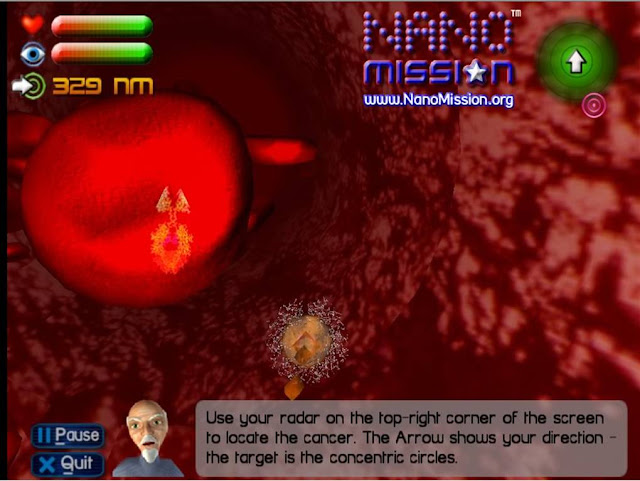 “Nanomedicine is an area that has caused a great deal of excitement but has also been tragically misrepresented”, commented Cientifica CEO Tim Harper. “the nanomedicine challenge within NanoMission illustrates how nanoscientists are learning from nature to produce viable drug delivery mechanisms for today’s market”.

The game's plot is to save the world from destruction by Dr.Nevil and his army of nano-machines and nano-materials, whilst the player stealthily learns about real world nanotechnology. The game hero (player) supported by Dr. Goodlove and his assistants use nano-imaging, create nano-machines, develop nano-materials, and utilise an extraordinary shrinking machine to shrink the player to the nanoscale to stop Dr. Nevil and save the world.

The game will be played through Nine challenges covering the following scientific concepts:

Nano Medicine: How nanotechnology can be used to help fight disease Available now as a playable demo.

Nano Scale: What the nano scale is like from a first person point of view & how it differs from normal scale.

Nano Electronics: How nanotechnology is used in electronics.

Self-Assembly: Understanding self-assembly in the nanoworld.

Nano Materials : How tho create them and what are their properties

Whilst most teenage gamers are familiar with nanotechnology as a fantastic futuristic technology involving miniature robots, very few have a realistic understanding of nanotechnology, realise its impact on the world around them, or are genuinely stimulated about its possibilities. Coupled with declining numbers of physics, chemistry and engineering students, this is a major cause for concern.

NanoMission's aim is to inspire some of the brightest teenagers about the world of nanotechnology, potentially opening their eyes to choosing it as a career. Aimed at 12-18 year olds, NanoMission™ is an engaging learning experience which educates players about basic concepts in nanoscience through real world practical applications from microelectronics to drug delivery.

Through sponsorship, game developers aim to make the PC version of the game, including a ‘teachers’ version which contains lesson plans and online support, available at no or minimal cost to schools and colleges throughout the globe with the initial emphasis focused on US and UK.