The Serious Potential Of Game Technology 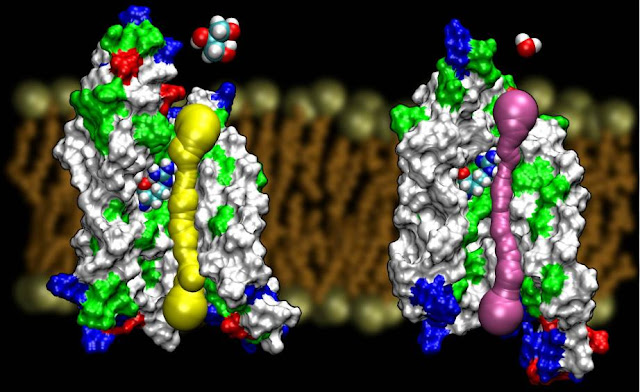 Illinois molecular researcher Klaus Schulten and his team generate computer simulations of working components of human cells in a process that starts with an expensive supercomputer crunching data about millions of atoms.


When it's time to view the resulting interactive molecules interacting, the researchers turn to PCs with relatively inexpensive video cards – the same Nvidia and ATI cards that serious game players buy online or off the shelves of electronics stores.

“It's been a godsend, a gift to science, to use this,” said Schulten, director of the Theoretical and Computational Biophysics Group at the Beckman Institute of the University of Illinois at Urbana-Champaign.

“When we started out 15 years ago, we had a $400,000 graphics computer. It couldn't do the things that these graphics boards do that cost a few hundred dollars. Today everyone has one on their desk.”

As companies such as Sony, Microsoft, Nvidia and ATI pump millions into research and development for the competitive video game industry, technology is beginning to spill over into applications such as the Illinois molecular research. 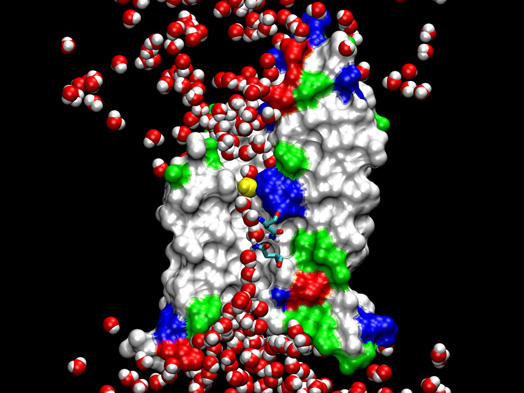 Water through aquaporin
Here, simulated water molecules (red and white) passing in single file from outside the cell (top) through a channel in the aquaporin protein to the cell interior

The Art of Water Transport in Aquaporins

Aquaporins are membrane water channels that play critical roles in controlling the water contents of cells. These channels are widely distributed in all kingdoms of life, including bacteria, plants, and mammals.

More than ten different aquaporins have been found in human body, and several diseases, such as congenital cataracts and nephrogenic diabetes insipidus, are connected to the impaired function of these channels.

Scientists led by Klaus Schulten at the University of Illinois use scientific visualization and molecular dynamics simulation - which tracks how atoms in a molecule move - along with computer-game technology to study membrane proteins, which reside in cell walls and control what passes. In effect, a researcher can interact with the protein and "feel" mechanical resistance as an ion, for instance, passes through the channel. 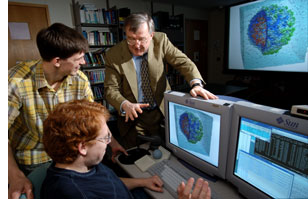 Schulten and his group plan to look at the Nintendo's Wii console to see if the system's innovative controller can take the place of the $1,500 equipment used to interact with simulated molecules in much the way a game player interacts with the worlds of “Halo” or “Grand Theft Auto.”