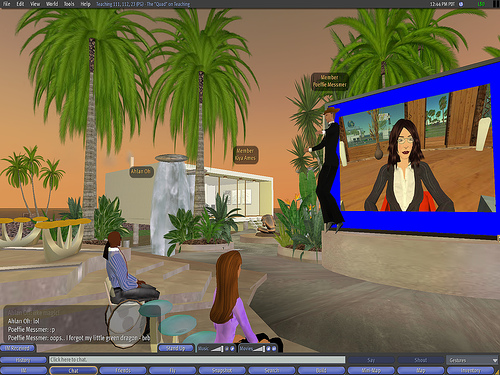 Example of teens+adults merger: Adults listening in to the live audio stream from the teen grid, as the giant screen display photos taken in the teen grid on a slide show.

On May 6th. 2007, at 12 PM SLT, there will be a walk on the SL road from Meiji East to Opera. This walk will be the first protest walk in Teen Second Life. The mission is to get Linden Lab to grant teenagers permission to travel to the main grid's PG sims, and adults to travel to teen grid's public sims.
This is in conjunction with what has been named the Unification Proposal, which is summarized below. It is exciting to see the teens self-organize through a grassroots campaign.

Alex Harbinger, proposes that Teens be allowed to venture to the Main Grid's PG simulators, yet the Teens will still retain the Teen Grid for themselves. Connecting the two Grids (Teen Grid and Main Grid) would allow for a more diverse community, which in turn would prove the underlying essence of 'Second Life' as it really is - A Second Life, adults with Teenagers.

By retaining the original Teen Grid, Linden Lab would evade any possible legal problems, and still keep their theme of a place 'only for Teens'. This would also allow for teens that wish to stay separate from adults.

Adults would benefit from having Teens on the MG-PG sims in a magnitude of ways, including a more diverse community, being able to communicate not only across continents, but also across age groups. Adults would also be able to teach Teens how to mature, and in turn, Teens would be able to show off their creativity. Adults would still keep the Mature sims to themselves, so that any adults who don't want to see teens all the time can stay within the majority mature sims. 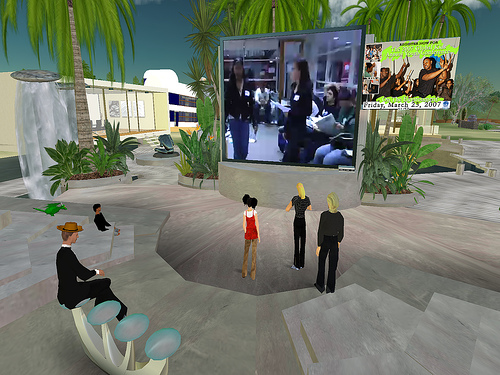 Another example: Global Kids ran a full day of live streaming on the NMC Teaching Sim. Here is a shot of people dropping by to watch the live workshop on March 23, 2007