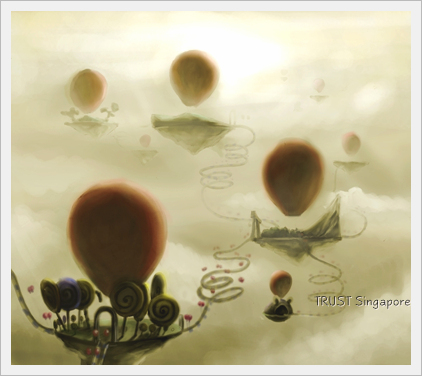 WHAT IS THE TRUST PROJECT
The Trust project is an immersive, storytelling game and healing environment for young people, with human movement interaction triggered by a haptic chair.

PROJECT PREVIOUS PHASE - SINGAPORE COLLABORATION
Performance Technologists, puppeteers, dancers and actors, like people with disabilities, know from life experience that 'avatars' and most existing animation formats do not come close to representing or 'capturing' human movement.

To this end, the NTU GameLAB of Nanyang Technological University (NTU) and SMARTLab UK of the University of the Arts London (UAL) have developed the multi-purpose haptic chair system for children’s hospital environments. NASA also has a haptic chair system, but theirs is configured for astronaut training. 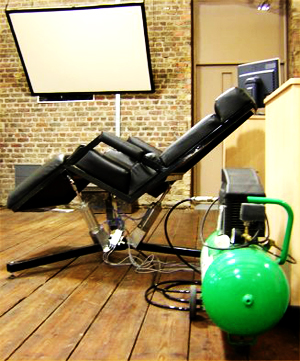 The SMARTlab’s long term collaboration with haptics and robotics researchers including Dr Brian Duffy - creator of the Haptic Chair System known formally as the ActiveChair - allowed a team of UK and Irish researchers to bring their game and interfaces for further development in Singapore. 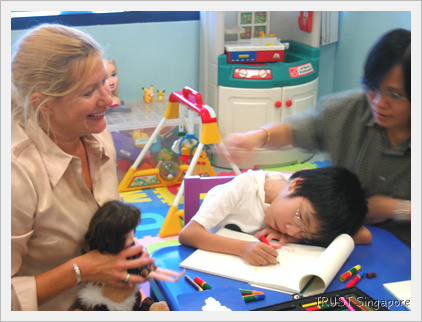 The TRUST game - created by Dr Lizbeth Goodman with a team of collaborating institutions worldwide – has been customized for use by children in Singapore.

The game exploits game technology to present children between the ages of 8 and 13 with virtual worlds that unfold before them on the screen of the system.

The system employs a game engine and an associated software framework. The chair per se is pneumatically operated and consequently ‘active’. It has a haptic interface that is synchronized and congruent with game play. A series of input devices for the hands, legs and/or feet to activate movement, sound and even music is provided. For those who are unable to move their limbs, the system can also be operated by the patient using voice and breath.

The chair system is thus configured to empower child patients to manipulate an integrated immersive experience through the virtual worlds of TRUST, in which children in hospital wards, and also young people with physical disabilities, can run and play freely.

Because the TRUST game’s ActiveChair interface can also be networked with other models of the system over the internet, users in different parts of the country and even in different countries can also share virtual worlds, and express themselves and interact with others through play. Much more than a distraction, the TRUST game contributes to the improvement of child patients in many realms -- psychological, social and emotional -- as a simple aid in the management of his or her illness or disability. 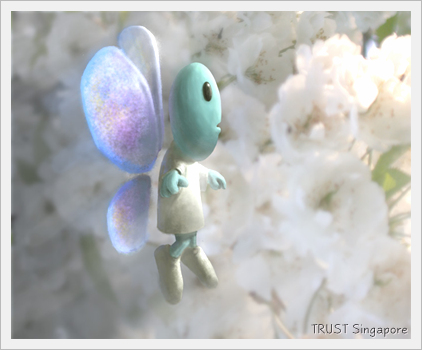 The TRUST characters have been conceived as nonhuman, non-gender-specific creatures with personality, and with customizable 'parts' or 'limbs'. Each is controllable by input devices most comfortable to the users based on their physical abilities

On November 20th 2006 the SMARTlab Team went to the Stephen Hawking School in London to install and test the Haptic Chair and the custom-made soundbox with the selected children.

They have selected three children per group with whom they believe the most important breakthroughs might be made with use of the TRUST game and interfaces- either for the children themselves, or for the wider community in terms of what they could learn from these children’s interactions and learning/play styles.

The teachers in each group and senior faculty at the school have provided guidance on appropriate ways to work with these children. The group includes many children with complex multiple disabilities (cognitive impairment and some form – or several intertwined forms- of physical disability or degenerative conditions). Some of the conditions which the group have are: Multiple Sclerosis, Cerebral Palsy, mild Downs Syndrome, Autism, and other complex but as yet undiagnosed learning and developmental conditions.

SMARTlab is currently biding for a user testing project in 2007, to test the Activechair, story/game and interfaces with a ‘control group’ of young people with physical disabilities, whose cognitive abilities would be easier to ‘read’ and therefore to test with the learning aspects of the project.