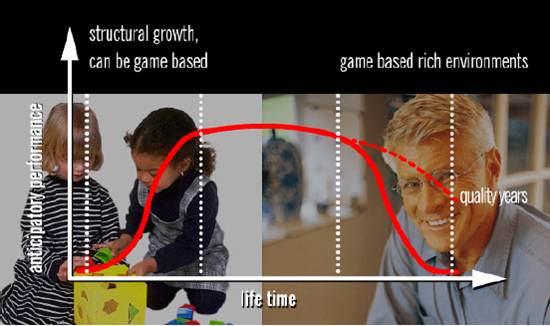 Via: Seneludens by Mihai Nadin


Aging is accompanied by a lack of interest in playing. This is often based on the aging individual's decline in cognitive and physical abilities and leads to a vicious cycle: physical inability leads to further cognitive deterioration. Furthermore, the aging individual's anticipatory abilities are weakened, which leaves him/her more open to accident.

However, engaging the aging in playful activities could result in a new form of individualized behavioral gameplay to compensate for this decline. In order to mitigate cognitive and physical deterioration, providing the aging with games than engage them to play could turn out to be a new form of individualized behavioral therapy.

The long-term project Seneludens is dedicated to a new category of games focused on stimulating the aging to play games that will maintain and even improve brain plasticity, hence cognitive and anticipatory abilities.

The title is derived from two words:


senescence (from the Latin sene, “old age”), that is, changes that take place in a living organism as time advances; and

ludens (as in homo ludens, playful human, playfulness being a characteristic of humankind).

For Mihai Nadin, a pioneer in the field of computer graphics and a professor at the University of Texas at Dallas, this vision could become part of electronic games available to seniors in coming years. 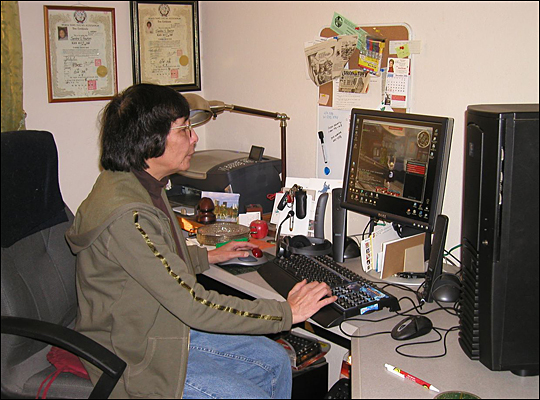 The 68-year-old engineer heads a $13 million research project aimed at designing games and other therapeutic behavioral environments for the aging generation.

Mihai Nadin is testing a game that simulates walking through a city. Gamers walk on a sensor, following directions on a screen and avoiding obstacles. Nadin says the game improves the ability of the mind and body to work.

Nadin envisions a day when video games will be used as tools for rehabilitation at nursing homes. But he says that day may be a long way away if game makers view the elderly simply as a lucrative demographic. "I would prefer that companies raise… their ethical standards and start thinking: Don't we have the responsibility to produce the games that reflect their needs, that will make their life better?"

The research project, which is a long-term project (5 to 8 years, pending available funding and the development of new scientific models), was formulated in September-October 2004. Many faculty members, many professionals from the fields of medicine, geriatrics and brain imaging, along with therapists, and social workers, have provided input.