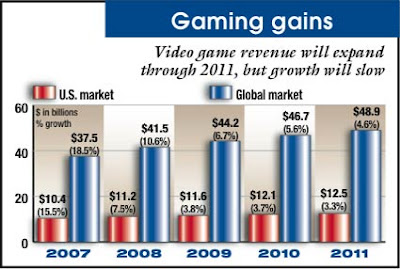 On my previous post Serious Games, Serious Money: A Sizeable Market, dated March 12, 2007, I've tried to extrapolate a few "back of the envelope" figures for the actual size of the Serious Games market, departing from PricewaterhouseCoopers' media outlook report 2006 for the video game sector worldwide.

This report has now been updated, with the following major highlights:

By 2011, the worldwide gaming market will be worth $48.9 billion at a compound annual growth rate of 9.1% during the five-year period. The compound gains handily exceed the 6.4% advance that PwC eyes for the overall entertainment economy during the period.

(Personal Note: As piracy rates subvert the actual market size, my best estimate for the worldwide video game market could rise to $58 bi by 2011).

Its data include consumer spending on games, but do not include spending on hardware and accessories.

Key growth engines will include online and wireless games, new-generation consoles, as well as the burgeoning in-game advertising business.
The overall gaming audience continues to expand and become somewhat more female and older than in the past thanks to casual games and games becoming an "important part of culture" - which in my view would embed the Serious Games segment.

Whereas the military was one of the first customers of Serious Games, it has been joined by a long line of users, including other government agencies, healthcare providers, schools (both K-12 and universities) and Fortune 500 companies (for team building, leadership training, sales training and product education, among others).

In the U.S., online and wireless games should see the biggest gains through 2011, as PwC predicts online will expand from an estimated $1.1 billion market last year to $2.7 billion in 2011, and wireless will double from $499 million to $1 billion.

In-game advertising will be a key spark for U.S. gaming revenue, growing from an estimated $80 million last year to $950 million in 2011, according to PwC. But this estimate could prove conservative as "advertisers like to reach the younger males" that many games tend to attract.

For 2006, PwC's preliminary estimates are for the U.S. gaming market to have expanded 10.6% to $9 billion, and it expects the first-ever jump beyond the $10 billion mark this year to about $10.4 billion.

This is my conservative estimate: the Serious Games market would be ranging between $200 - 400 million per year only in US, in 2007.

There is now an emergent supply chain for Corporate Serious Games, with a number of corporations taking the first steps and commissioning Serious Games development, which could easily make available additional $ 400 - 600 million per year. The same applies to Healthcare providers (e.g., training for surgery, for emergency medical response, and for managing surgical teams), bringing the overall figure for the Serious Games market close to $ 1.5 billion in 2008.

As Serious Games are Gaining Solid Traction in Europe and the video game industry is finding more and more business outside the entertainment sector, this figure could rise to $ 2 billion shortly.