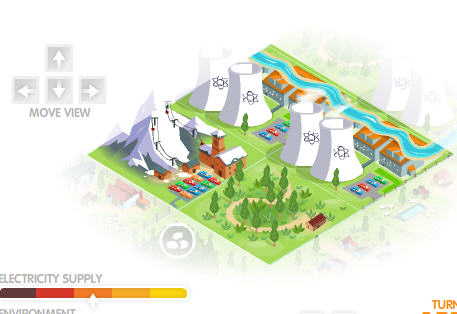 ElectroCity was developed to increase public awareness – particularly among students – about energy usage, its cost, and its effect on the environment. That is, the general terms and concepts of the industry and the dilemmas that go along with them.

The sponsor of the game, Genesis Energy, is an energy provider and retailer in New Zealand.

The goal is not to provide students with a sophisticated understanding of the controversies in the various energy debates. Rather, it's to spark an interest and lay an unbiased foundation for later learning. The sponsor of the game, Genesis Energy, is an energy provider and retailer in New Zealand.

Like a mini-version of SimCity, the Flash-based Web game ElectroCity lets you develop your own metropolis from the ground up.

ElectroCity is a fairly simple, turn-based strategy game. You get 150 turns to create your masterpiece, but the challenge is to allocate resources wisely as you build. One-hundred and fifty turns may seem like an eternity, but many of these will be skipped in the process of gathering cash and natural resources, so it's essential to build infrastructure early. A full game at average speed takes about 30 minutes. It's also easy to save any game in the middle, then restart later using a personalized city code the game assigns you. 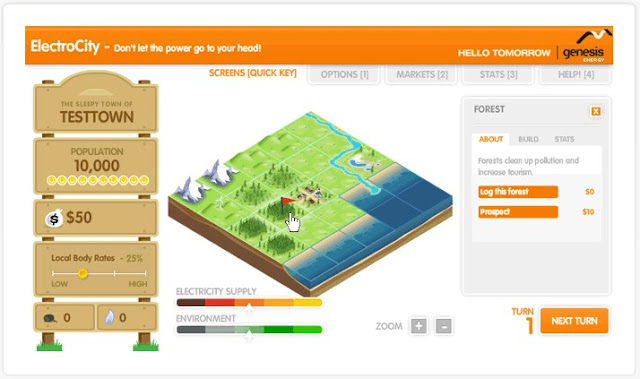 Played on a 5x5 grid, ElectroCity starts you off with a small urban center, a population of 10,000, a 25 percent tax rate, and one wind farm that provides all the town's energy. Surrounding areas are randomly populated with forests, plains, mountains, rivers, or oceanfront property. Each area may provide resources that can only be discovered by prospecting.

Once you've discovered coal or gas, you can build plants and start selling energy on the open market. You can raise and lower taxes, and upgrade your wind, coal, and gas plants as you see fit.

Once you amass enough cash, you can start building luxury items such as sports stadiums, ski resorts, or beaches to attract a larger population. If you grow your population too quickly, however, you'll get crunched on your energy usage and end up paying through the nose on the open market.

If you make it to the end of the game, you'll receive a score based on your energy management, popularity, population, and environmental prowess.

After you've received your final score, you can submit your city to the Finished Cities page.

There's a resource area for teachers and some pretty impressive prizes being offered in two school competitions.

The game is designed to be played online - but something I found to be of interest is that there is an option to download a limited version of the game that runs on any computer and doesn't need Internet access, with two versions available, one for MacOSX and one for WindowsXP.

ElectroCity is not a win or lose game. There are lots of different ways to play and you can set your class specific objectives. For example, if you wish to try a green approach, a win might be considered any city with 50,000 people and an A rating in the environment category. Or you might focus on economics and get the kids to go for the most money.

ElectroCity is designed to be flexible, so you can use it as you wish. A whole module that deals with energy, the environment, tourism and growth could be centred around the game, mixing formal lessons with fun interactive game play. You could return to the game again and again over several weeks and compare how the kids played at the beginning with how they play at the end, putting their new knowledge into practical use and getting the kids to assess what they've learnt to help them make better decisions in the game.