Serious Games Illustrate The Impact Of Lifestyles On The Earth 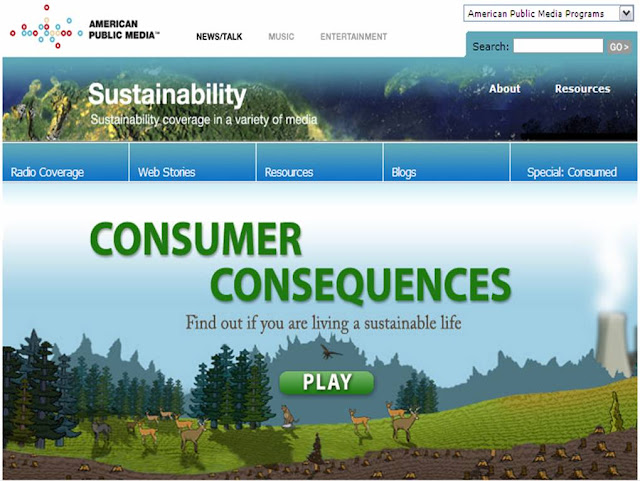 Via: Consumer Consequences - How Many Earths Does Your Lifestyle Require?

Consumer Consequences, is an interactive game designed to illustrate the impact of our lifestyles on the Earth. It's part of American Public Media's™ special series, "Consumed," which explores whether the modern American lifestyle is sustainable in the long run.

American Public Media journalists worked with video game developer Realtime Associates (www.rtassoc.com) to create a serious game, which allows Americans to redesign their lifestyles to try to live within the world's resources. 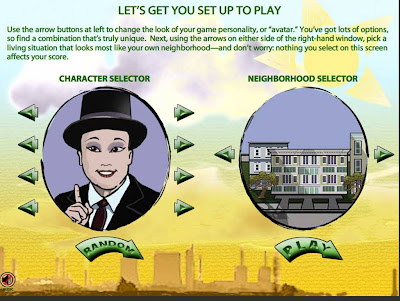 Consumer Consequences is a Flash-based lifestyle calculator that not only figures out the impact your lifestyle choices have on the world, but then replicates you 6.6 billion times to find out how many earths it would take to supply enough resources if everyone lived the way you do.

The game prompts users to describe their lifestyles in terms of house size, car travel, energy use, food and shopping consumption, and the mathematical model behind the game translates the information into an easy-to-understand visual summary

Keep an eye on the background graphics of your in-game world as you play. They'll slide across the screen like theater scrims as you answer questions to illustrate what your "world" of consumption would look like. They'll reflect the waste you produce… the infrastructure (commercial, residential, industrial and transportation) you require… the energy (fossil, nuclear, and renewable) you consume… and how your lifestyle impinges on forests and other undeveloped land.

The model starts out with an Earth score of 1.0 and changes at each step as you describe your lifestyle. 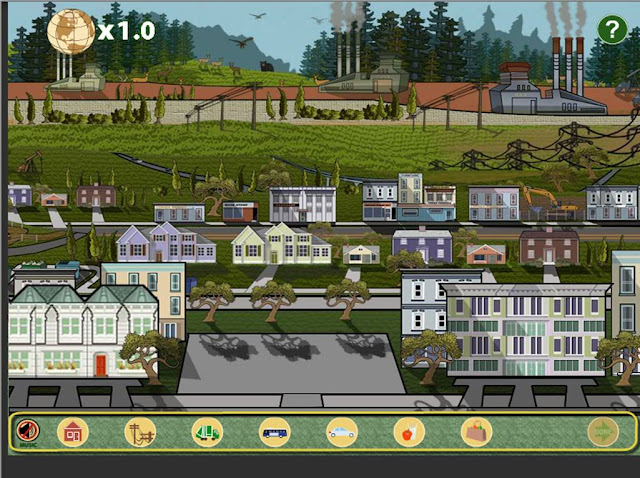 Players get their score as the number of "Earths" it would take to support their lifestyles. Anything over one Earth is unsustainable. 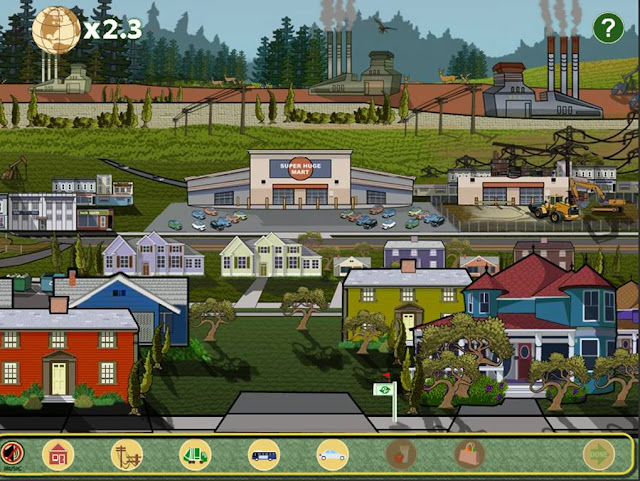 The overall score is broken down into categories at the end of the simulation, which helps players identify sources of excess and potential areas of improvement.

The program doesn't just end on potentially bad news, but rather gives each player an opportunity to go back and tinker with the inputs to see how changing various aspects of consumption, or aspects of government policy, would reduce one's footprint.

The Consumer Consequences game would be a thought-provoking activity to do as a family, providing kids a vivid snapshot that will allow them to consider their own consumption.

Consumer Consequences is based on the ecological footprint methodology developed by research partner Redefining Progress.

Behind the scenes, the game is learning from players. All the answers are saved in a database, along with voluntarily shared information from the players.