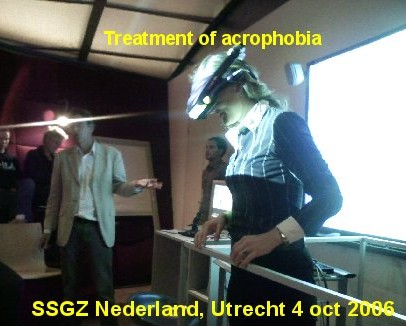 VRET (Virtual Reality Exposure Therapy) is effective for patients with acrophobia, arachnophobia and fear of flying. The effectiveness of VRET in other anxiety disorders like claustrophobia, fear of public speaking, fear of driving, post-traumatic stress disorder, and agoraphobia also holds promise for the future.

In the science-fiction thriller The Matrix, the heroes “plugged in” to a virtual world. While their bodies rested in reclining chairs, their minds fought martial-arts battles, dodged bullets and drove motorcycles in an elaborately constructed software program.

This cardinal virtue of virtual reality—the ability to give users the sense that they are “somewhere else”—can be of great value in a medical setting.

Researchers are finding that some of the best applications of the software focus on therapy rather than entertainment. In essence, virtual reality can ease pain, both physical and psychological.
Phobias

Millions of people suffer from phobias that limit their activities and negatively impacting their lives. Many seek psychological treatment in order to manage or conquer their fears. For years, a popular form of treatment was exposure therapy, in which a therapist would expose a patient to stimuli related to his fear in a controlled environment. In many cases, patients would learn to manage their anxiety through repeated exposure coupled with encouragement from a therapist.

Exposure therapy is time consuming. Often it's also expensive and inconvenient, and it can compromise patient confidentiality. For example, treating a patient with aerophobia, or the fear of flying, usually involves a trip to the airport. It might take several visits for a therapist and patient to make their way through security to a gate. Eventually both have to get on a plane and fly to a destination. Now that you have to be a ticketed passenger to pass through security at airports, it can be prohibitively expensive to treat a patient with exposure therapy. Because patients and therapists travel together, the patient's confidentiality is compromised because the public has the opportunity to see the therapy in action. 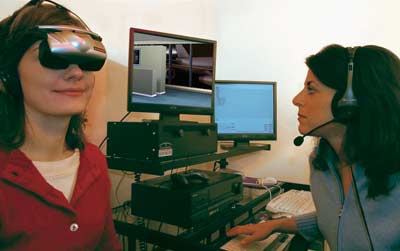 One alternative to traditional exposure therapy is virtual-reality exposure therapy. This kind of therapy uses a virtual reality unit to simulate situations that cause anxiety in phobia patients. It has several advantages over traditional therapy. Doctors don't have to leave their offices. Scheduling treatment is easier. It's less expensive in the long run. And patients are often more willing to participate in a program they know will allow them to deal with their fears in a nonphysical setting. Since patients can undergo therapy inside the doctor's office, confidentiality isn't an issue. 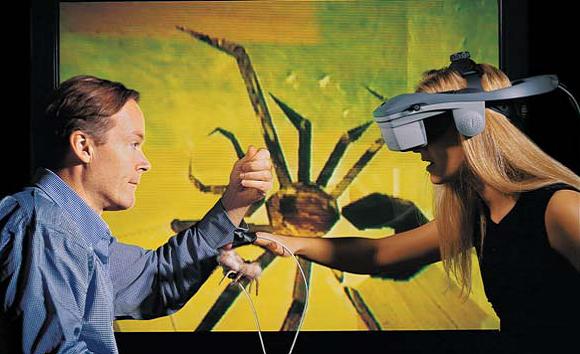 SPIDERWORLD is a virtual-reality program designed to help phobic patients overcome their fear of spiders. The patient wears a headset that shows a virtual tarantula (screen shot from program is shown in background). To provide tactile feedback, the system tracks the positions of a toy spider (suspended by the author, at left) and the patient’s hand, allowing her to “touch” the virtual creature.

Dr. Larry Hodges, a virtual reality computer scientist at the University of North Carolina -- Charlotte, became interested in a possible therapeutic application of VR technology in the early 1990s. He approached Dr. Barbara Rothbaum, a professor of Psychiatry at Emory University, and together they collaborated on a project that would test VR technology's efficacy in recreating patients' fears. They decided to design a simulation for patients suffering from acrophobia, or a fear of heights. Dr. Hodges felt that it would be relatively easy to create a program giving the illusion of height compared to other, more complex fears. 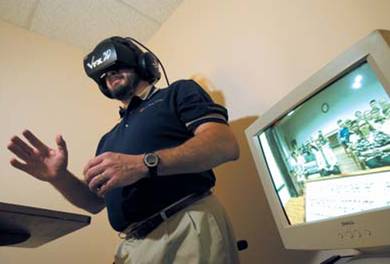 FEAR OF PUBLIC SPEAKING can be treated using a virtual-reality program developed by Virtually Better, a software company based in Decatur, Ga., that leases its programs to psychologists and psychiatrists. Ken Graap, the company’s chief executive, practices a speech in front of a virtual audience, shown on his headset and on the computer monitor. 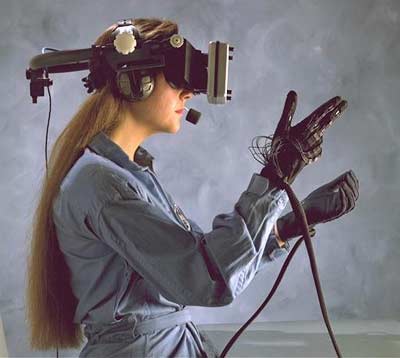 When healthy volunteers received pain stimuli, functional magnetic resonance imaging showed large increases in activity in several regions of the brain that are known to be involved in the perception of pain (near right and below). But when the volunteers engaged in a virtual-reality program during the stimuli, the pain-related activity subsided (far right and bottom). 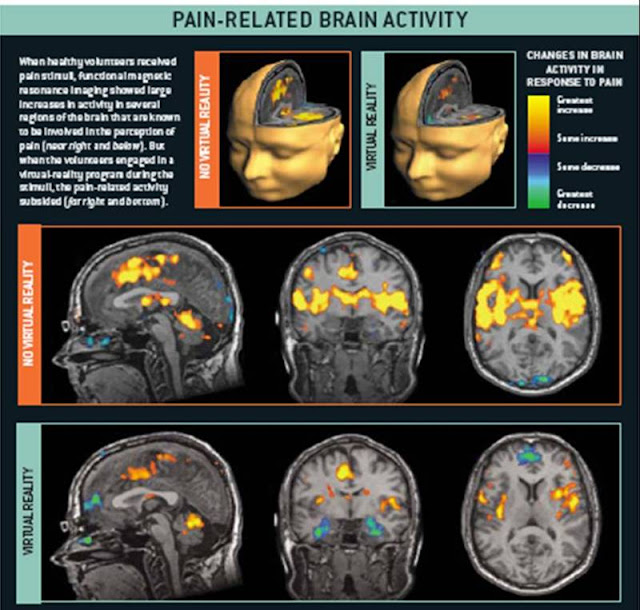 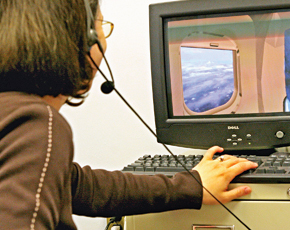 At the UT Dallas Center for BrainHealth, Adolescents and Young Adults with Autism Practice Their Social Skills in Virtual Worlds

A technology associated with fantasy worlds is helping young adults with autism in the hard reality of life.

Researchers at the University of Texas at Dallas Center for BrainHealth are working with patients diagnosed with Asperger Syndrome using virtual reality training.

People with the disorder have normal intelligence, but they suffer from a variety of social cognitive defects, including an inability to read nonverbal clues and adapt well to change.

These young adults -- considered to have a form of autism -- face many obstacles in life. Interviewing for a job or asking somebody for a date can be monumentally difficult.

To help them succeed, researchers from the center have created a virtual world for them to practice their social skills. Each person creates an avatar/character in his or her likeness, who then navigates through a virtual world, interacting with real people represented by their own avatars.

The virtual world includes settings commonly encountered in everyday life such as restaurants, shops, offices, apartment living and parks, where they can meet “new” people in a safe, controlled environment. For example, if the goal is applying for a job, their avatars substitute for them as they practice their interviewing skills with real people on-line until the fear and anxiety of a real encounter with a potential supervisor diminishes. This method is distinct from role-playing, which is a widely used method, in that they feel the same emotions as they would in direct encounters.

Virtual reality provides a therapy tool to rewire the brain through practical experiences that can be manipulated in ways the real world cannot, says Dr. Sandra Chapman, director of the Center for BrainHealth.

“The clinicians can change the virtual world to increase the complexity of the exercise, control for sensory overload, provide motivation, and record feedback,” said Chapman.

“Unlike other models of intervention, virtual world experiences provide a powerful way to learn new and more appropriate ways to respond to people in scenarios similar to those faced everyday,” she said.

“Our research in brain discoveries tells us that the brain can rewire its pathways with intensive practice grounded in experience – not by learning rules of how to interact – which has been the most common therapy practice heretofore,” said Chapman. “These young adults have the advantage of an intensive, interactive therapy to deal with problems they encounter everyday but in a safe setting to practice their social skills.”

Before entering the program, the participants undergo a series of brain imaging measures and neurocognitive tests. At first, they practice with their avatars with a clinician by their sides.

Quickly, new persons/avatars are introduced to the client and they begin to interact with family members and trusted friends. In addition to the virtual-world therapy, the young adults receive plenty of one-on-one coaching as they are trained to develop the insight to assess their own responses. At first, they watch recordings of their interactions, and gradually they are expected to modify their behaviors to fit the context in real time. The idea is to train their brains in new ways of thinking in contexts that closely mimic real life. That goal is to stop unhelpful responses before they can start.

“There are almost no treatment programs for older children or young adults with autism-related disorders,” said Chapman. “And yet this is a very good time to intervene because it is during adolescence that rapid brain development takes place – particularly in the areas supporting social-skill development.”

Although still in the early stages, the BrainHealth researchers say they can detect dramatic improvements with many of the participants in terms of simple awareness of their social problems, which they say is the first step to improvement.

Sources:
The University of Dallas At Texas
Virtually-Reality Therapy