Serious Games To Learn The Rules Of The Immune System 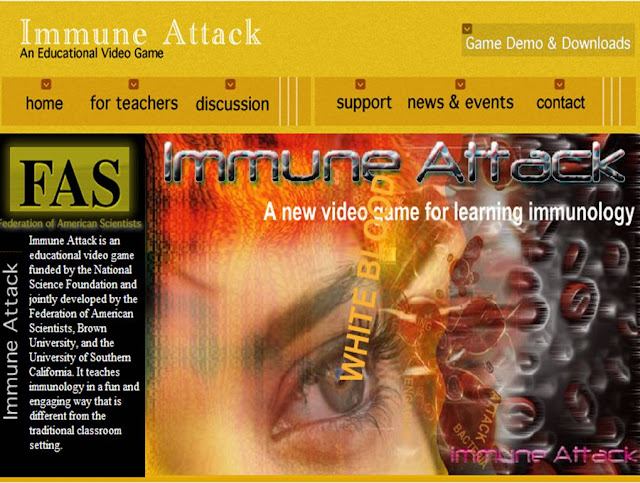 The Federation of American Scientists (FAS), in cooperation with Brown University and the University of Southern California, have finalized their development of the medical Serious Game Immune Attack, object of my prior post Excellent Educational Serious Game, dated November 2006.

This National Science Foundation-sponsored game is designed to motivate students through a series of progressively more difficult challenges in a compelling game environment in which success depends on an increasingly sophisticated grasp of concepts in immunology.

An article wrote by the research team some months back has been published in the July issue of the Communications of the ACM.

Here are some extracts:

The immune system of living organisms is inherently fascinating but can be extremely difficult to understand. Its operation involves complex interactions among a large number of cell types, antigens, and inter-cellular processes.

Members of the game design team were immediately intrigued by the fact that the immune system is based on rules that lend themselves to translating key concepts into software.

The idea of immune cells combating bacteria naturally lends itself to battlefield metaphors. Invading bacteria and viruses breach natural defenses and unless stopped by friendly forces will continue to conquer new territory.

However, the immunologists in the group vetoed the idea of using anything resembling a first-person-shooter game where the immune cells would locate and blast invaders into oblivion with weaponry, which is simply not how the immune system works. 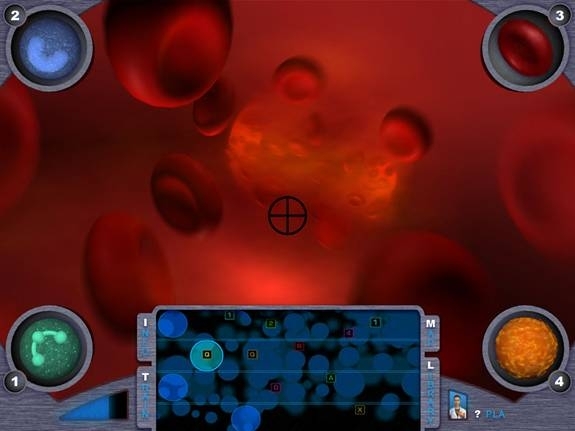 Following contentious scientifically deep discussions and frequent reviews of the background immunology, the gamers began to realize that the strategies used by the immune system, the defensive maneuvers used by invaders, and the field of battle where the engagement plays out are more fascinating and bizarre than anything experienced in any commercial first-person-shooter game.

The approach we ultimately chose is a variant on discovery games
(such as Descent and Freelancer) where the player explores strange territory, earns the right to use advanced equipment by demonstrating competence, and moves on to new challenges. 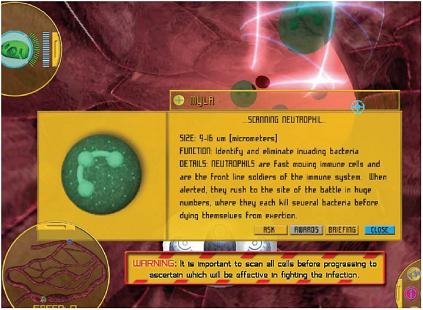 In this case, subject matter experts had to rethink traditional curricula.

Artists and programmers had to confront a technical domain that lacks straight lines and where the key players are wobbling blobs. Game designers had to accept the odd rules of engagement in a battle where the player can’t see the enemy, and friendly forces may appear to be far more evil than the invaders.

“Since we were operating with a limited budget and the primary goal was to incorporate science research in a number of areas, we chose to work with a research team rather than a commercial developer.”

The team had expertise in such areas as biology, immunology, pedagogy, game design, and learning science. We drew on their knowledge of: the complexities of the underlying biology; information technologies needed to build complex simulations and visualizations; instructional objectives and strategies best suited for the target audience; application of the software tools to build games the targeted audience would find engaging and motivating; programming and scripting languages necessary for Q&A tool integration; and evaluating the effect of game/exploration-based instruction.”

JENNIFER SIECK is internationally recognized as one of the foremost developers of medical models in the 3ds Max environment, and a leader in the Association of Medical Illustrators. She is considered one of the top 3ds Max modelers in the U.S. specializing in medical simulation and visualization.

For the last 4 years, she has been the Creative Director for Laerdal Medical Corporation defining their Virtual Reality medical task trainer products; focusing on combining photo-realistic 3D models with force feedback capabilities in their fully interactive self-directed learning system for training intravenous catheterizing.

DC_SIGGRAPH welcomes Jennifer Sieck as their guest speaker on Wednesday, November 14 from 7pm to 9pm at BAE Systems.

DC_SIGGRAPH is the Washington D.C. Professional Chapter of ACM SIGGRAPH. ACM SIGGRAPH is dedicated to the generation and dissemination of information on computer graphics and interactive techniques.

Jennifer is going to give her perspective on how a traditional Medical Illustrator ends up in weird worlds of gaming and Virtual Reality.