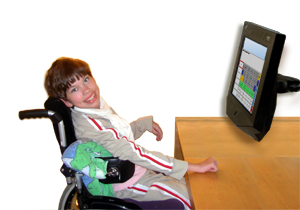 Early this year, I dedicated a post to TRUST: Serious Games Creating A Healing Environment, which focused on the most touching TRUST Project, created by Dr Lizbeth Goodman, Director of the SMARTlab Digital Media Institute, University of East London.

The TRUST project is an immersive game and healing environment for young people, with and without disabilities, in and out of hospital. As part of the project, SMARTlab researchers invented a unique haptic chair that moves the bodies of children who cannot control their own movement.

Now, I feel compelled to post on another SMARTlab's breakthrough.

The InterFACES project has used this pioneering technology to create a ‘soundboard’ or ‘eye harp’ with communication grids and musical interface developed in collaboration with SpecialEffect, UEL PhD students with disabilities and professional musicians. 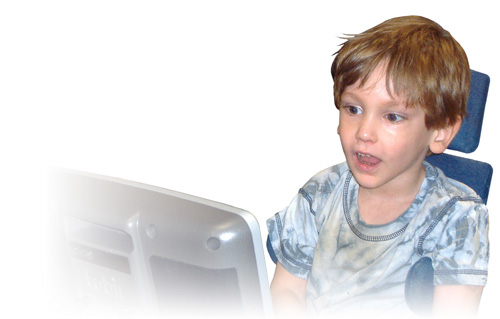 The SMARTlab team demonstrated the new musical application of the Mytobii technology, in a Live/Online Jam with Colm O'Snodaigh of KILA and special guests including Fay Patton (jazz musician), Clilly Castiglia (SMARTlab), Michela Ledgidge (Modfilms/SMARTlab) and very special guest Sapna Ramnani, who joined the jam using her eyes as her instrument and interface.

The next show is scheduled for Prague, where the team has been invited to present two major research papers at the Leonardo journal special anniversary event for MIT Press this November.

This phase of the InterFACES project was made possible by the Promising Researcher Fund of UEL, drawing on linked research at SMARTlab funded by BBC R&D ad NESTA, and in collaboration with the Oxford ACE Centre and Dr Donegan’s work on the European Commission’s COGAIN Project and his work on games for people with disabilities, through SpecialEffect.

The SMARTlab Digital Media Institute at the University of East London (UEL) has been short-listed for the prestigious Times Higher Awards 2007!

SMARTLAB is an innovative research institute that develops new technologies, performance and learning tools, games and multimedia interfaces to increase social inclusion by empowering young people, women, students in developing countries and people with disabilities, including many PhD researchers. The Times Higher Award nomination is in the category of support for students with disabilities, and recognizes a range of successful innovations.

These include the MAGIC Gamelab and the TRUST game project, the Activechair, the InterFACES Project and world premiere of their eye-triggered writing and musical performances for PhD students with Cerebral Palsy, and their interactive games & virtual learning environments, and their work with NESTA and the Stephen Hawking School, recently featured at the Science Museum.

In the past year, SMARtlab has developed a storytelling game for children with physical and learning disabilities at the Stephen Hawking School in East London, combining human movement with the haptic chair.
Other work underway includes the InterFACES project, a new technology application which enables people with severe motor disabilities to compose and perform music simply by moving their eyes, recently showcased at the IEEE.
InterFACES is co-directed by Professor Goodman with Dr Mick Donegan, joining the team from the Oxford ACE Center, where he has pushed the boundaries of eye-tracking technologies for assistive tech and user empowerment

How Exactly Does SpecialEffect Help?

SpecialEffect helps young people with disabilities to use leisure technology in the following ways:

By helping young people to find the kinds of games they can play on the SpecialEffect GameBase whichever way they control the computer – from a switch to an Eye-Controlled computer.

By supporting hospitals, hospices, special schools, etc. in finding the right leisure technology for those young people who need it most, when they need it most.

By loaning specialized leisure technology to young people who have a sudden serious injury or illness.

SpecialEffect is dedicated to providing the expertise necessary to enable everyone to enjoy the fun, friendship and challenges that can be found in the world of computer games and leisure.