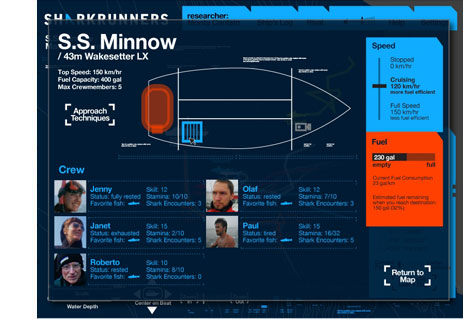 With games like Sharkrunners that cross media and create an artful mix of real and virtual worlds, area/code delights in challenging gamers' expectations

Big Games are large-scale, real-world games. A Big Game might involve transforming an entire city into the world's largest board game, or hundreds of players scouring the streets looking for invisible treasure, or a TV show reaching out to interact with real-time audiences nationwide.

Focused for so long on features—technical specs, rendering speeds, and sophisticated, polygonal graphics—gaming has suddenly become about socializing, real-world interaction, and, well, fun for everybody. This seismic shift is a source of delight for Frank Lantz and Kevin Slavin, co-founders of New York gaming and marketing company area/code.

area/code was founded in early 2005 by Frank Lantz and Kevin Slavin and it has a HQ in Manhattan. With backgrounds in game design (Lantz) and digital marketing (Slavin), the pair initially started their company to produce "big games": large-scale, multiplayer efforts that take place in the real world. Since then, they've pulled off some impressive feats of organization and synchronicity. 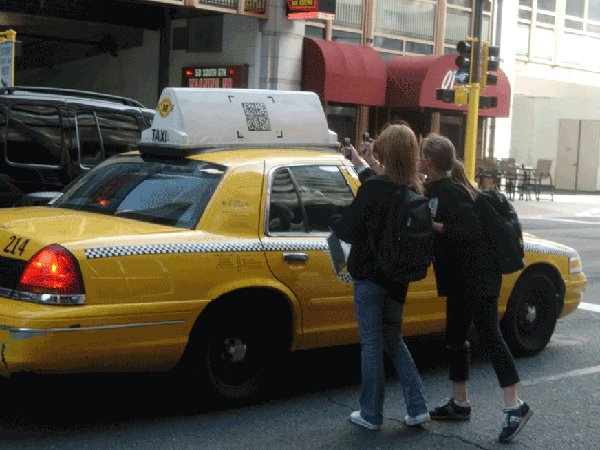 For ConQwest, they designed an urban treasure hunt, transforming the streets of Minneapolis into a big grid around which teams of high school students dragged large, inflatable chess pieces, attempting to capture codes with special camera phones. 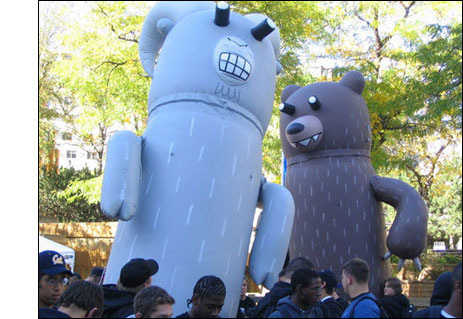 That was just the beginning: Increasingly sophisticated—and ubiquitous—technology is allowing area/code to bring its life-size experiments to a global audience. 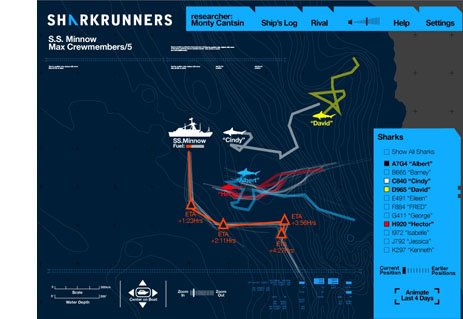 Players control ships and crews and collect data on sharks—real sharks, that is, that have been tagged with GPS units and are tracked in real time. 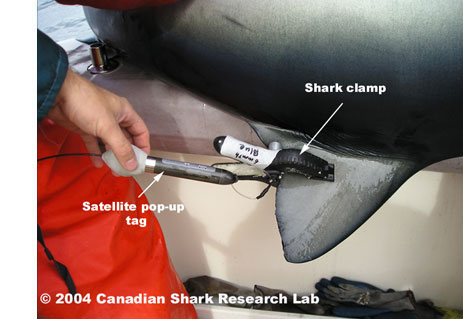 The virtual boats also move as they would in real time, with players alerted via text messages whenever their craft is within range of a shark. The player then has three hours to log into the game and respond to the virtual challenge. 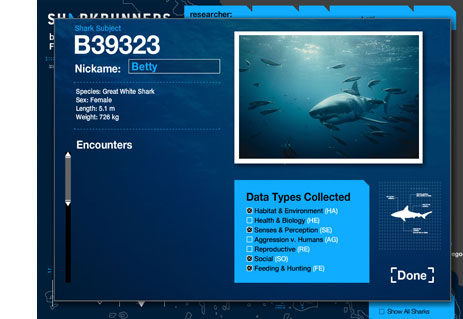 In my prior posting Serious Games Become Tangible Using Mobile Technology, I had already covered Crossroads and Plundr. 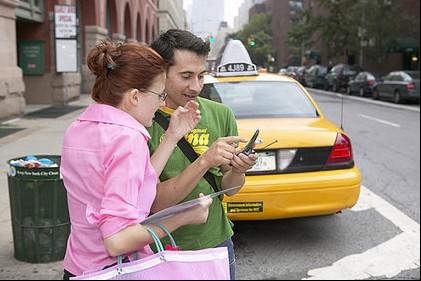 Crossroads is a GPS game developed for Boost Mobile handsets. In this 2-player game, players capture Manhattan intersections by moving through them. But they must beware the Baron Samedi, an invisible spirit who is in the grid with them. The combination of real and imaginary opponents creates an uncanny experience, and a new type of play. 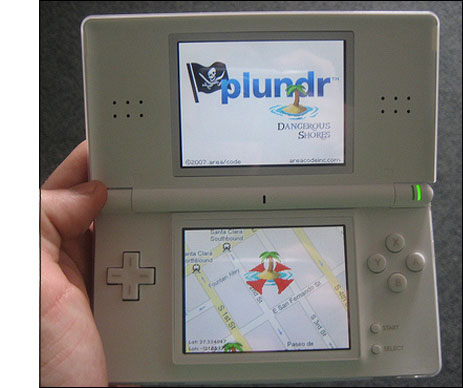 Plundr is the world's first location-based PC game. Using state-of-the-art Wi-Fi Positioning System technologies (WPS), the game locates the user's computer in physical space and uses their location as part of the game. 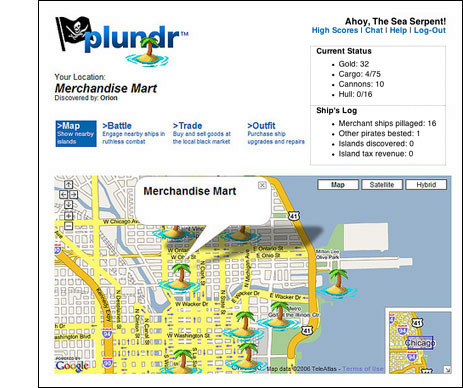 The game itself is a pirate adventure, in which players move from island to island to buy, sell and fight for goods. Depending on where you are in the physical world, you'll find different islands, different market prices and different ships to fight,

Many other cross-media games can be found on their website: 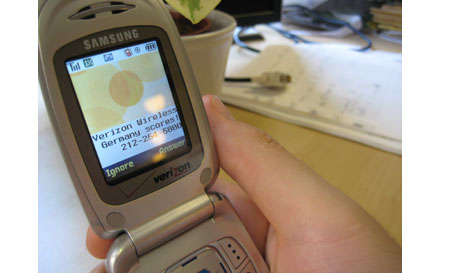 Together Everywhere is designed for fans of the European 2008 Football Championship who want to celebrate together, wherever they may be. Developed for Puma, Together Everywhere uses mobile phones to connect fans both in the real world and beyond. Fans download their favorite team's song or chant as a ring tone that is associated with a specific number. Every time their team scores a goal, Puma calls them to trigger that cheer. 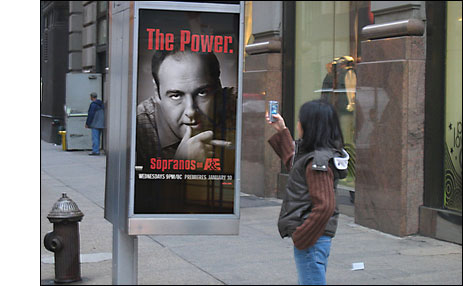 The Sopranos A&E Connection game was designed for the premiere of the Sopranos on A&E TV. Using cell phones to collect pieces, players composed a online gameboard to anticipate what might happen that night on the Sopranos, much like Fantasy Football works with sports.

The National Academy of Public Administration (National Academy) and PETLab (an initiative of Parsons The New School for Design and Games for Change) announced on July 10th that they are joining forces to develop an innovative game for college students about America’s fiscal future. In developing the game, PETLab is to collaborate with area/code. 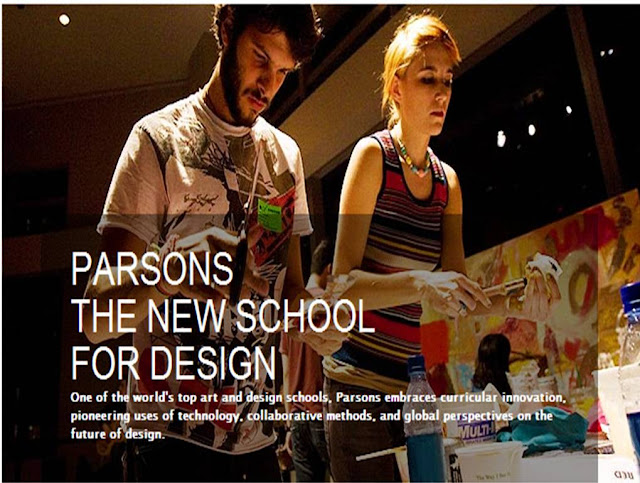 The Peter G. Peterson Foundation is funding the development of this “Big Game,” which will launch on college campuses in spring 2009.

This six-month project will produce a game to raise awareness, increase understanding of the underlying causes, and spark action on the looming fiscal problems facing America. The game will be played on the physical space of each campus, and take advantage of the extended online lives of students through social media, as well. It will explore difficult fiscal issues like unsustainable entitlement programs, rising health care costs, and financing investments in alternative energy sources.

Fellows of the National Academy who are recognized experts in related matters of public policy, administration and management will be working with leading game designers at PETLab to conceptualize, prototype and test the game.

PETLab is one of the first university centers dedicated to developing games in the public interest. (See also my previous post Parsons: Serious Games Prototypes As A Force For Social Good).

“Games are a great vehicle for exploring complex systems – like America’s fiscal problem,” said Colleen Macklin, Director of PETLab. “The first step in bridging differences and finding solutions is education, and games have already been proven as a powerful medium for learning. By encouraging players to try out different strategies, the game will help players see how the nation’s choices will impact their lives, their loved ones, and the lives of future generations.”

Participation in the game will be free to students, and the National Academy will draw on the strength of its network of 600 Fellows -- many of whom serve as university presidents, deans and distinguished professors – to provide access to universities campuses. Fellows Donna Shalala, President of the University of Miami, and Neil Kerwin, President of American University in Washington DC, have already agreed to host the game on campus.

The project team is seeking funding from corporations and corporate foundations to sponsor the game on three to five college campuses next spring, with a goal of engaging 1500 or more students in the issues by playing the game.

About the National Academy

The National Academy of Public Administration is a non-profit, independent coalition of top public management and organizational leaders that tackles the nation’s most critical and complex challenges. With a network of more than 600 distinguished Fellows and an experienced professional staff, the national Academy is uniquely qualified and trusted across government to provide objective advice and practical solutions based on systematic research and expert analysis. Established in 1967 and chartered by Congress, the National Academy continues to make a positive impact by helping federal, state and local governments respond effectively to current circumstances and changing conditions.

PETLab, which stands for Prototyping, Evaluation, Teaching and Learning Laboratory, is a joint initiative of Parsons The New School for Design and the non-profit Games for Change. It was launched in December 2008 through a grant from the MacArthur Foundation’s digital media and learning initiative. PETLab develops new games, simulations and play experiences that encourage experimental learning and investigation into social and global issues. It is a place for testing prototyping methods and the process of collaborative design with organizations interested in using games as a form of public interest engagement.