Serious Gaming With The Power Of Ideas and Networking 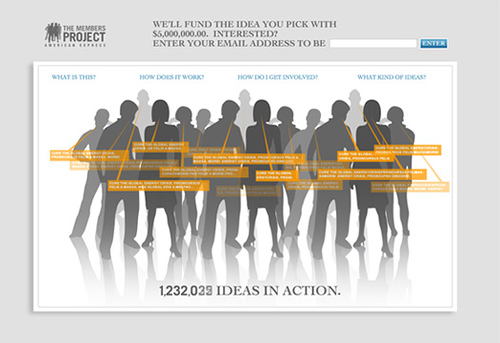 MEMBERS PROJECT® is American Express’s quest to reach out and ask the community for suggestions for worthy causes to donate to.

NEW YORK (JULY 22, 2008) – American Express announced today the official start of this year’s Members Project , the online initiative that invites Cardmembers to submit ideas for projects that American Express will fund with $2.5 million.

In conjunction with the launch of Members Project, American Express unveiled new survey results which showed that 96 percent of Americans feel now, more than ever, the world needs great ideas to make a positive difference; 92 percent of Americans surveyed said that they believe in the power of ideas to help change the world.

With Members Project, American Express puts the power of ideas into the hands of of Cardmembers and, whether a Cardmember or not, everyone is invited to join the discussion and nominate their favorite projects online.

“Every idea has the potential for greatness, particularly when a community of supporters gets behind it,” said Jud Linville, president and chief executive officer of Consumer Services, American Express.

“Today is the official kick-off of Members Project, a unique way for people to come together and share their ideas, passions and beliefs that may help shape our future. And it’s not just about ideas; it's about all participants galvanizing their own personal networks - friends, family members, colleagues - to get behind the causes that are meaningful to them.”

A collaborative competition model attracts solutions from participants around the globe. Innovators submit their ideas online and a community of supporters provides feedback on the problem and proposed solutions throughout the life of the competition. This interactive process spurs action on important issues and connects participants' solutions with key decision-makers, investors, and service providers.

From July 22 through August 19, Cardmembers will be able to submit their own ideas for projects to make a positive impact in the world and discuss, nominate and decide upon their favorite projects.

Whether a Cardmember or not, everyone is invited to participate by commenting on and nominating their favorite projects online.

This type of collaboration is greatly encouraged as submissions can be revised throughout the first four weeks of the program. In addition, there are new and easy tools to promote projects and spread the word, including online badges, widgets and banners to be posted on sites like Facebook and MySpace.

Cardmembers can make a collective difference by casting their vote, showing their support for their favorite projects, and narrowing down to the Top Five projects starting September 30. The winning projects will be those with the most Cardmember votes, announced October 14.

Experts on Making a Difference

The Members Project Advisory Panel, a roster of thought leaders and experts in arts, community, education, the environment and health, will participate in vetting the project submissions and narrowing down the field to the Top 25 submissions. The panel is looking for projects that are innovative and achievable with a broad, positive impact, and Cardmembers will ultimately vote on the winning projects.

In 2007, after 8,000 project submissions and three rounds of voting, thousands of American Express Cardmembers from across US chose ”Children's Safe Drinking Water” as the winning project, and American Express provided $2 million in funding to UNICEF to bring the project to life. With funding from American Express, UNICEF has been working to promote and provide education about household water treatment and safe storage options in countries including Angola, Guinea, Democratic Republic of the Congo (DRC) and Tanzania.

At the conclusion of the project, Members Project funding will help to significantly reduce waterborne diseases by promoting household water treatment, safe storage and a healthy environment, and will additionally provide safe water to more than 3.5 million people for at least two years.