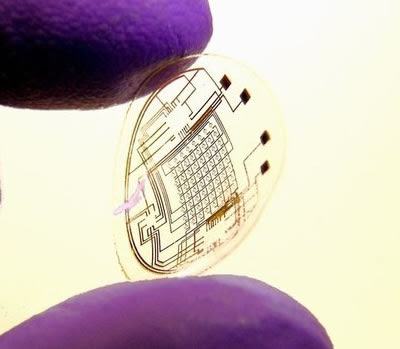 In his web article, “Views of the Future,” British Telecom futurologist Ian Pearson predicts that by 2020 nano-size electronics inside “active contact lenses” will receive TV, video games, Internet, and phone calls; and display images directly onto the retina. Tune program with pocket keyboard initially; later with thought control. Watch TV; browse the web, or video-phone a friend; all with eyes open or closed. 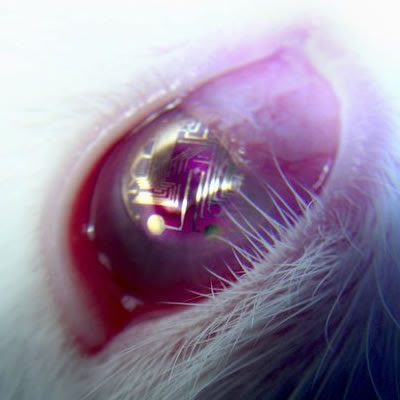 Movie characters from the Terminator to the Bionic Woman use bionic eyes to zoom in on far-off scenes, have useful facts pop into their field of view, or create virtual crosshairs. Off the screen, virtual displays have been proposed for more practical purposes -- visual aids to help vision-impaired people, holographic driving control panels and even as a way to surf the Web on the go.

The device to make this happen may be familiar. Engineers at the University of Washington have for the first time used manufacturing techniques at microscopic scales to combine a flexible, biologically safe contact lens with an imprinted electronic circuit and lights.

There are many possible uses for virtual displays. Drivers or pilots could see a vehicle's speed projected onto the windshield. Video-game companies could use the contact lenses to completely immerse players in a virtual world without restricting their range of motion. And for communications, people on the go could surf the Internet on a midair virtual display screen that only they would be able to see.

"People may find all sorts of applications for it that we have not thought about. Our goal is to demonstrate the basic technology and make sure it works and that it's safe," says Babak Parviz, a UW assistant professor of electrical engineering , who heads a multi-disciplinary UW group that is developing electronics for contact lenses.

The prototype device contains an electric circuit as well as red light-emitting diodes for a display, though it does not yet light up. The lenses were tested on rabbits for up to 20 minutes and the animals showed no adverse effects. Ideally, installing or removing the bionic eye would be as easy as popping a contact lens in or out, and once installed the wearer would barely know the gadget was there.

Building the lenses was a challenge because materials that are safe for use in the body, such as the flexible organic materials used in contact lenses, are delicate. Manufacturing electrical circuits, however, involves inorganic materials, scorching temperatures and toxic chemicals. Researchers built the circuits from layers of metal only a few nanometers thick, about one thousandth the width of a human hair, and constructed light-emitting diodes one third of a millimeter across. They then sprinkled the grayish powder of electrical components onto a sheet of flexible plastic. The shape of each tiny component dictates which piece it can attach to, a microfabrication technique known as self-assembly. Capillary forces -- the same type of forces that make water move up a plant's roots, and that cause the edge of a glass of water to curve upward -- pull the pieces into position.

"There is a large area outside of the transparent part of the eye that we can use for placing instrumentation," Parviz says. Future improvements will add wireless communication to and from the lens. The researchers hope to power the whole system using a combination of radio-frequency power and solar cells placed on the lens, Parviz said.

A full-fledged display won't be available for a while, but a version that has a basic display with just a few pixels could be operational "fairly quickly," according to Parviz.

The research was funded by the National Science Foundation and a Technology Gap Innovation Fund from the University of Washington.