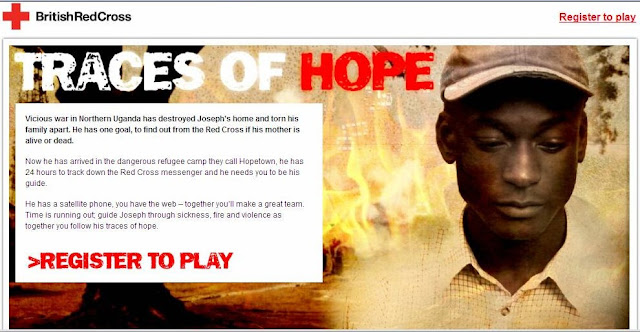 Via: British Red Cross - Red Cross using ARG to draw attention to the plight of civilians who get separated from loved ones during war

It could be a phone call, it could be an email, but it's from a Ugandan teenager asking you to help find the mother he has lost touch with during his country's civil war.


Traces of Hope is being launched as the first ever charity online Alternate Reality Game and is being built by the British Red Cross to coincide with its Civilians and Conflict month. 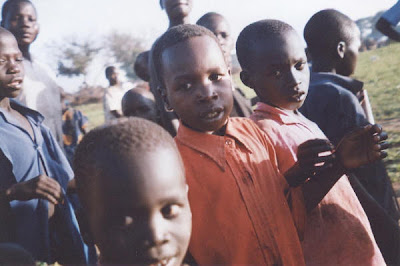 The game features Joseph a sixteen-years-old caught up in the Ugandan civil war, separated from his family, hungry and alone in a camp overflowing with thousands forced to flee. Joseph is desperately seeking his mother, but he needs your help… 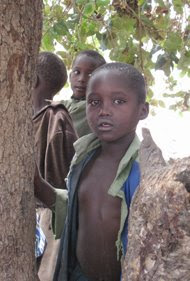 Registration will open on Sunday 28th but until then there’s a teaser page at www.tracesofhope.com and a teaser video at http://www.vimeo.com/1811645.


The Red Cross is using the real-time game to draw attention to the plight of civilians who get separated from loved ones during war, and to highlight its family-tracing service.

"It's like a puzzle," said Charles Williams, editorial manager for the British Red Cross. "It will put players in the shoes of people in conflict situations who have to make difficult decisions."

Some 2 million people were uprooted by the two-decade conflict in which Lord's Resistance Army rebels kidnapped thousands of children to use as soldiers and sex slaves.

The game forces players to use the Internet, email and telephone to get an idea of the intense pressure civilians face in the turmoil of conflict.

"For a teenager alone in a war zone it's very disorienting, very scary, very difficult to know what to do. There are no easy decisions," Williams said.

Once players sign up, the game starts without warning when Joseph gets in touch asking for help, and they have to track down information and clues planted on websites like publishers Penguin and humanitarian news service Reuters AlertNet.

"It mixes storytelling, game play and detective work all together. It's the first time a charity has done an ARG," said Matt Connolly of Enable Interactive, the digital design company that helped develop the game.

Ranked the UK's No. 1 digital agency earlier this year, the Bristol based agency has gone from strength to strength since it was co founded in 2003 by Matt Connolly and Darius Pocha.

Winning major contracts against stiff competition from digital 'super-agencies' Enable's profile has risen dramatically in 2008 with cutting-edge work for global brands like BBC, WWF, Microsoft and British Red Cross. As a result of recent client successes the agency has made a strategic decision to focus on three key markets namely sport, fashion and charities.

"The agency was in the perfect position for us to re think its future direction. With experience gained on brands like Speedo, Lipsy and Commes des Garcons and the audience and commercial insight we've developed, it made sense for us to concentrate our expertise and ensure we're the agency of choice for brands in these sectors." said Matt Connolly Strategy Director.

"It's an extremely exciting time for us. It's the innovation that's propelling Enable forward - with the right people, the smartest industry thinking and a ruthless focus on quality, our clients are getting outstanding results time and time again", said Connolly.

"With the significant increase in buzz surrounding Enable the agency now stands at 20 staff. Connolly and Pocha, both of whom came together from much larger London agencies, have a hands-on approach to agency life and retain positions of strategy director and creative director respectively.

'Everyone here is a specialist in what they do - our clients never have anyone mediocre working on their projects. We do things differently to traditional agencies - we encourage our people to have a life outside their jobs. That way the stay interesting and enthusiastic and have more value than the normal agency burn-outs working 25 hours a day. It's partly these qualities that we feel makes the agency attractive to clients" commented Pocha.

"Enable has been at the forefront of digital innovation for nearly 5 years now and is well positioned for continued future success. We are proof that the traditional agency model can change. For the better. We have incredible clients; we deliver great, innovative work that we're all proud of and often we're working with brands who make the world a better place" concludes Connolly.

As security improves and people return home in northern Uganda, the Red Cross expects its tracing workload to increase rather than diminish.

The Red Cross has played a vital role reuniting families torn apart by conflict in northern Uganda over the last two decades.

“As people begin to go back home, the camp itself has become displaced and so it will become harder to find people and tracing will become a bit more intense,” said Remy Mbaziira, Ugandan Red Cross tracing programme officer.

He described how many children either became separated or ran away from their families as they fled during the conflict.

“Some have become street children in the trading centres where they do menial work or have to beg to survive,” Remy said. “The children range in age from as young as six to 18. When we identify the children, they usually know which camp they came from. Then our volunteers start distributing messages to try to trace their families.”

A squad of 13 motorcycles run by the Ugandan Red Cross (URC) collects and delivers messages to help trace missing relatives across the north and north-east of the country.

The URC also works closely with the International Committee of the Red Cross (ICRC) exchanging messages between family members and detainees.

When children are traced they are taken to centres where they can be reunited with their families and are offered counselling and support.