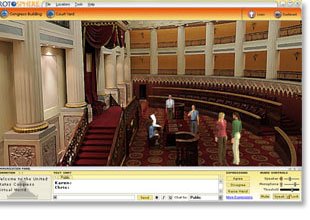 Via: Center On Congress – Virtual Congress, An Online Role–Play Simulation for Middle and High School Students

To give students an insider's view of representative democracy and help them understand their role as citizens, the Center on Congress at Indiana University is creating a new online learning environment, Virtual Congress.

Virtual Congress — an educational, multiplayer, online RPG — will function much like the real Congress, with committees, floor action, amendments, back–and–forth discussions, input from constituents, and random events that can influence the legislative agenda.

Students from across the country will assume the roles of Members of the House and Senate, lobbyists, journalists, and constituents.

As legislators in this virtual government, they will introduce bills and work to try to move their proposals through the various stages of the legislative process. They will receive opinions and requests from every direction: constituents, colleagues, and members of the press. This will all take place in a three–dimensional world, with re–creations of the House and Senate floors, committee rooms, legislative offices, and public meeting spaces.

Students in Virtual Congress will learn the mechanics of the legislative process, and they also will learn that successful legislating requires listening to different opinions and working out acceptable compromises among multiple viewpoints. Further, they will learn that the essence of a successful representative democracy is communication.

Because electronic communication is a primary vehicle for information exchange among students, it is a logical environment for them to practice the tools and rules of American democracy.

To guide the Center in helping students meet the stated learning objectives, they are conferring with experts in social studies education to help them with curriculum integration plans, outreach to underserved populations, standards–based assessment methods, and formative evaluation.

The Center is working with ProtonMedia on the game development component of the project, and with Ark Media, of Brooklyn, N.Y., on a companion video for the project.

ProtonMedia will use ProtoSphere, its virtual world as the foundation for the Virtual Congress. ProtoSphere enables students to participate and collaborate in multi-player activities such as Congressional committee hearings, writing amendments, and meeting with constituents. ProtoSphere features private and secure voice over Internet protocol (VoIP) and text chat communications, whiteboards, application sharing, and Web 2.0 technologies such as blogs and Wikis. 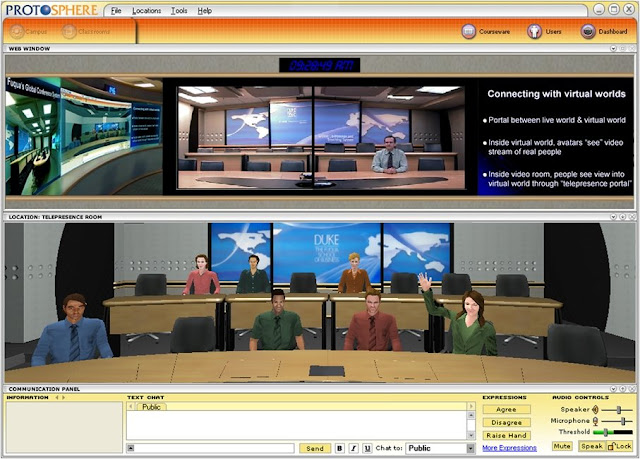 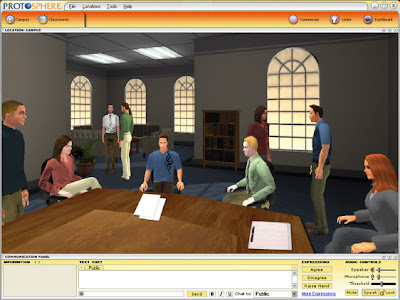 Other partners and collaborators on Virtual Congress include the public television station WTIU, the National Education Association, the Close Up Foundation, the National Council for Social Studies and the departments of Telecommunications and Learning Sciences at Indiana University.

The Virtual Congress project is funded by grants from the Corporation for Public Broadcasting (CPB), the MacArthur Foundation, the AT&T Foundation, and the Paul Ogle Foundation of Indiana.

The CPB grant is a part of their American History and Civics initiative, which calls on public television managers, film makers and content developers - especially in the high technology and interactive media sector - to join educators in creating ground breaking media projects and methods that measurably improve the learning of American history and civics by middle and high school students.

About The Center on Congress

The Center on Congress at Indiana University was established in January 1999. It developed out of Lee Hamilton's recognition during his time in the U.S. House of Representatives of the need to improve broad public understanding of Congress — its role in our large and remarkably diverse country, its strengths and its weaknesses, its impact on the lives of ordinary people everyday. 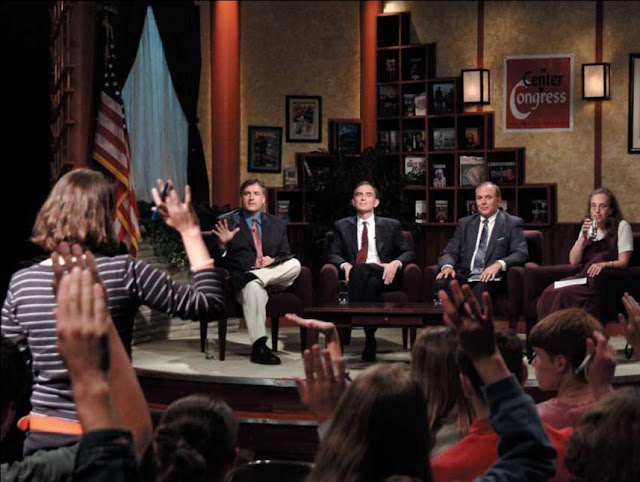 During the course of literally thousands of public meetings, talks at local schools, and discussions with individuals, Congressman Hamilton became increasingly convinced that the public's understanding of Congress was not at all commensurate to the importance it plays in our country and was reaching alarmingly low level, with too few people understanding the important role that Congress plays in our country.

Surveys have shown for many years that large numbers of Americans say the work of Congress has no relevance to their lives, that many of our top high school students cannot list basic functions of government, and that people say they have become so disillusioned with the political system that they have simply given up on it. In a representative democracy such as ours, that is a cause for concern.

Dr. Myles Brand, President of Indiana University in 1999, shared Congressman Hamilton's view that Congress should be better-explained to the American people. Together, they developed The Center on Congress.

Established in 1998, ProtonMedia is based in suburban Philadelphia and has more than two dozen clients in pharmaceuticals, medical devices, financial services and technology.