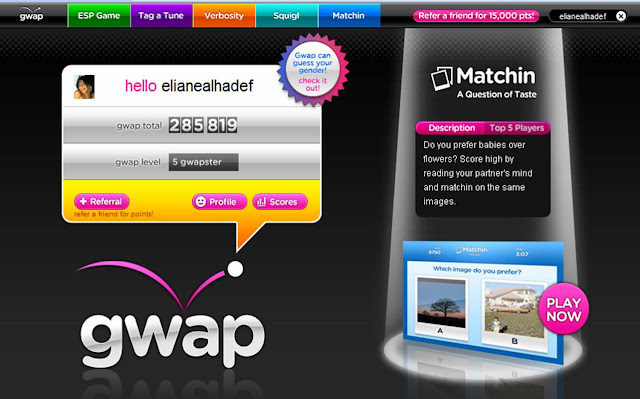 Via: GWAP – Games With A Purpose

I've been playing GWAP games since I came up with Adrian Ciccantelli’s last week post GWAP: Professor of computer science Luis von Ahn is getting people to solve problems that computers can't...while they play games.

When you play a game at GWAP (Games With A Purpose), you aren't just having fun. You are training computers to solve problems for humans all over the world.

There are five different games to choose from and you can come back whenever you like to carry on your score. I've been playing them for three days now and have totaled almost 300,000 points.

Taking the ESP Game as an example, you and a partner see the same image and are asked to type in a tag for it. When you agree on a tag, you move on and are awarded points. After just a minute of play, you've agreed on six or seven tags.

As GWAP records those six or seven tags and associate them with the images, computers get smarter: now a search engine will have a better idea of what's in those images. 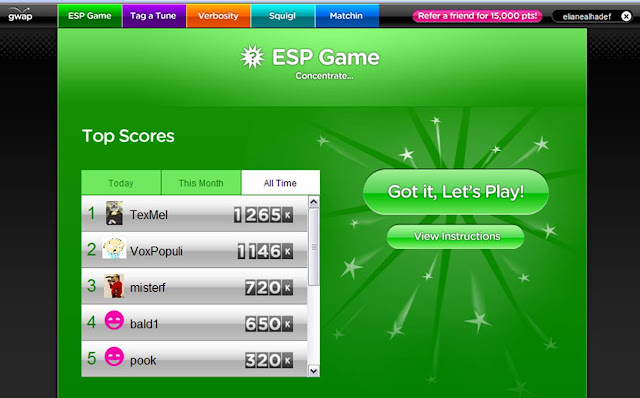 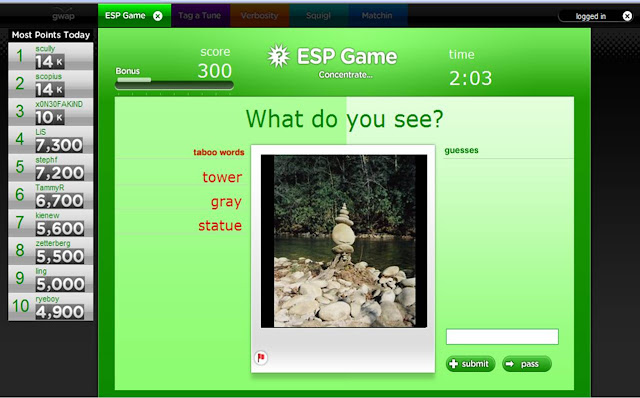 Knowledge, Intelligence and Wisdom are not terms often attributed to computers. The closest descriptors in the computer world are Data, Processors and Recursion.

A human could quickly look at a photograph and immediately identify all the elements in it - a man, a woman, a park bench, a tree, a child on a bicycle, grass, a pathway and a cloudy sky. But who could be bothered teaching a machine these elements that even a child can easily identify? How long would it take to type in all those words and point out each of the elements in just one photo? Then even if you did teach the machine everything about one photograph, would the computer be able to identify the same elements in another photo taken from a different angle? 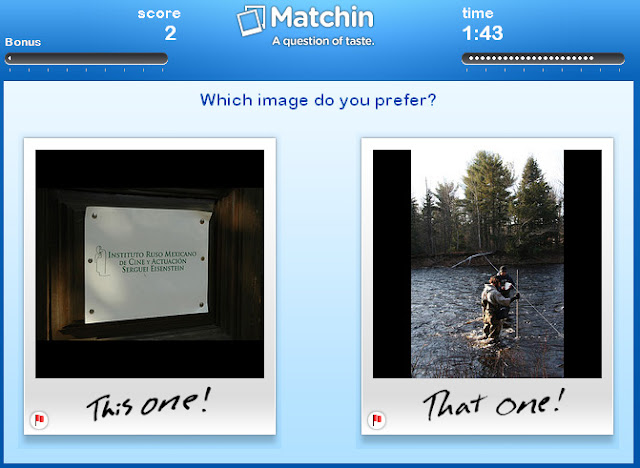 Matchin, a game in which players judge which of two images is more appealing, is designed to eventually enable image searches to rank images based on which ones look the best.

What about words? A computer may have data that labels milk and cola as liquid foods, but it wouldn't know that milk goes with cereal, but cola doesn't (usually). The human ability to recognize and recall experiences allows a person to make appropriate decisions. But how can these skills be imparted to a computer? The amount of data entry required would be astronomical. The cost of the required data entry operators would be prohibitive and the staff burnout would be disheartening.

That’s where Games With A Purpose (GWAP) comes in. If there’s no money for the staff required to teach the machine, you need volunteers. But volunteers come and go and usually represent a minuscule proportion of society. This was the challenge facing Carnegie Mellon University. How can one get ordinary Internet users from around the world to teach the machine? And how can one be sure they are teaching the machine accurately? Who will quality control that amount of teaching?

I will. You will. We will. And we’ll do it because it’s great fun, motivational and promotes thinking skills. Teaching the machine is a by-product as far as the players are concerned.

Besides the above mentioned ESP and Matchin games, GWAP three additional multiplayer games.

In the game Verbosity , one person (the narrator) receives an input word and using pre-supplied template sentences must accurately describe that word sufficiently well so that the second player can guess it correctly. Only English words can be used. Multiple players agreeing on terminologies and contexts ensure accuracy. The game is quick at only four minutes and each player takes turns being the narrator. 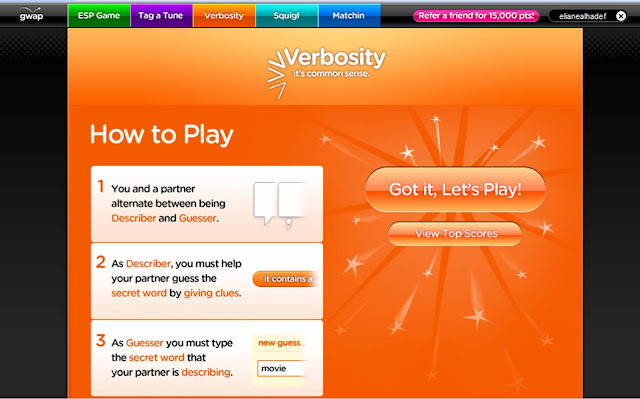 Verbosity, a test of common sense knowledge that will amass facts for use by artificial intelligence programs.

In Tag a Tune, each player listens to music and using words describes the sort of music they are listening to. Fast, slow, baroque, violins, techno, opera, rock. Based on the descriptions they see from their unseen partner, they each must decide whether they are listening to the same or a different piece of music. All the while, the machine is learning that this MP3 file has these attributes, cross-checked by multiple human game players! 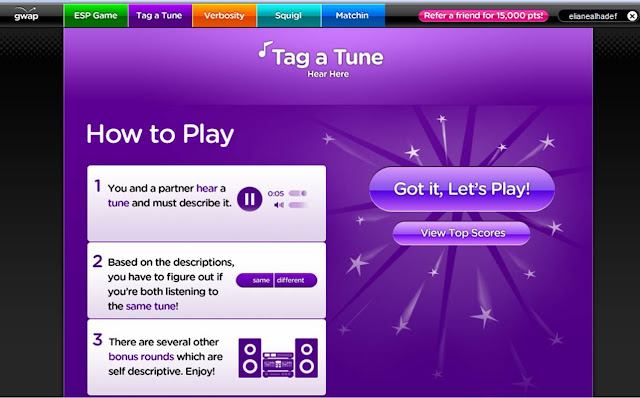 Tag a Tune, in which players describe songs so that computers can search for music other than by title - such as happy songs or love songs.

In Squigl game, players trace the outlines of objects in photographs to help teach computers to more readily recognize objects. 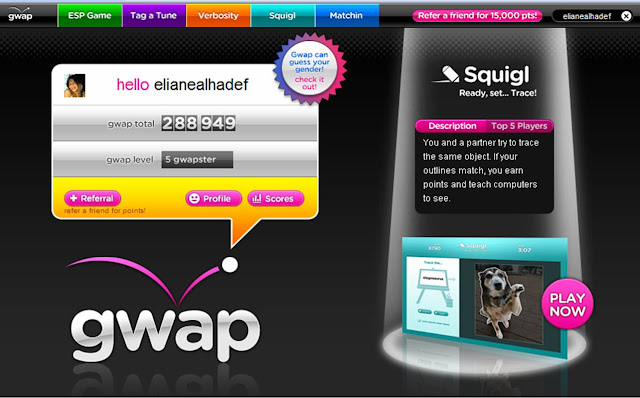 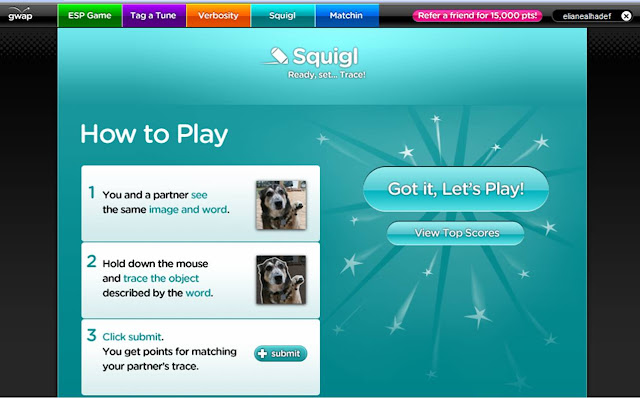 Unlike computer processors, humans require some incentive to become part of a collective effort. Online games are a seductive method for encouraging people to participate in the process. Such games constitute a general mechanism for using brain power to solve open problems.

In fact, designing such a game is much like designing an algorithm - it must be proven correct, its efficiency analyzed, and a more efficient version can supersede a less efficient one. Instead of using a silicon processor, these “algorithms” run on a processor consisting of ordinary humans interacting with computers over the Internet.

In GWAP and similar web-based tools, we envision the next stage in cybernetics, in which it becomes ever more difficult to discern who's in charge in complex man-machine systems.

"Human computation doesn't work unless you have people," says von Ahn. "That's why we've made the games on gwap.com as fun as possible. We need people." For the time being, anyway.