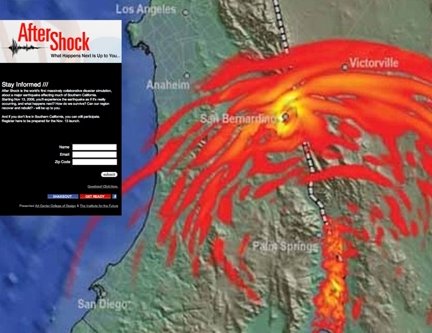 Via: After Shock – What Happens Next Is Up To You...


Serious Gaming Prepares L.A. For The Big One

The Institute for the Future and the Art Center College of Design in California launched last week a fascinating new Alternate Reality Game (ARG) that that simulates public response to a massive earthquake.

Called After Shock, it's the largest earthquake readiness drill ever attempted: it is part of the key public outreach programs Los Angeles Earthquake: Get Ready project and The Great Southern California ShakeOut.

After Shock is a collaborative project from Jason Tester of the Institute for the Future and Mariana Amatullo of Design Matters/ACCD with the Interface designed by Ryan D’Orazi, a student of Art Center College of Design.

ARG creators hope that it won't only raise awareness of what to do in the event of an earthquake, but also expose players to the proper course of action to take so that if or when it happens, they're ready.

After Shock asks the key question “What will you do when the big one hits?” and is set to run for three weeks.

The game is based on a 300-page U.S. Geological Survey scenario report that details the extensive damage that Southern California could experience in the aftermath of a 7.8-magnitude quake on the San Andreas Fault.

An after shock is an earthquake that occurs after a previous earthquake (the main shock).The game After Shock begins after the main shock, and players deal with the aftermath of the disaster. After Shock prompts users to complete real-world missions — and submit content based on them to the gaming community.

By providing an intellectual exercise to imagine how bad an earthquake could be, Tester and his co-game masters hope that they'll be able to change people behavior. 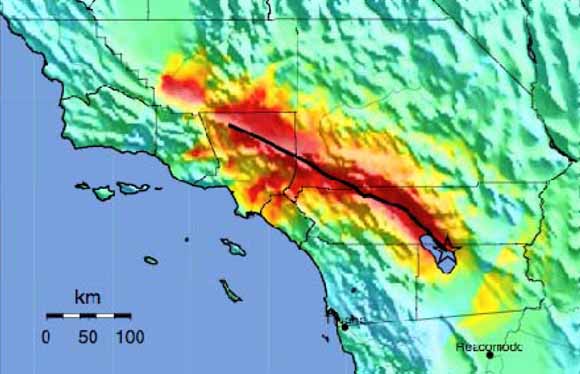 "Disaster preparedness was at the point where the messaging had hit the limit. You can give people this really elegantly designed flyer, and they stick it in a drawer and it hits them in the head during the earthquake," said Jason Tester, the lead game designer at the IFTF. "[The game] says, 'You are experiencing a real earthquake.' We're trying to make it feel visceral."

Tester said that the game is an attempt to bring the reality of the so-called Big One home to a younger demographic by borrowing the tropes of gaming. It is one of an increasing number of Serious Games attempting to deal with real-world problems through collaborative online action. Last year's World Without Oil had players imagine the world in the midst of an acute crude shortage and the IFTF's Superstruct asks players to craft solutions to a half-dozen near-future scenarios.

ARG Context and Background: Get Ready for the Big ShakeOut!
By Mariana Amatullo - who runs Designmatters at Art Center College of Design and is Director of The Los Angeles Earthquake Get Ready project.

Here in Los Angeles, we live with the certainty that at any given time the ground will shift dramatically. What has been famously coined a “coast of dreams,” is also one riddled with a web of faults that could rupture any day and without any warning, to produce an earthquake of catastrophic consequences. We live in earthquake country and this post-election November, we are about to experience an unprecedented call to action for earthquake preparedness throughout the region with the Great Southern California ShakeOut. It’s our future, a major earthquake occurring along the San Andreas Fault. The questions are not if it will happen, but when, and will we be ready? 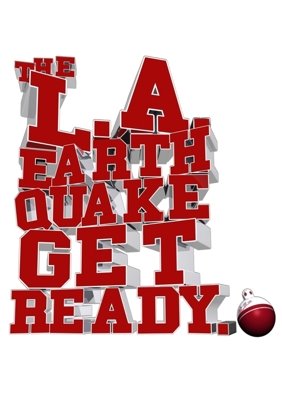 Aligned with ShakeOut, The Los Angeles Earthquake: Get Ready is a multifaceted communication project led by Designmatters at Art Center College of Design that has allowed us to investigate the contributing role of design in disaster mitigation and public awareness. Our point of departure three years ago when we launched the research phase of the project was to ask ourselves, what would it take for our creative community to anticipate a natural disaster of catastrophic scale, instead of responding to one?

Essentially, we wanted to be ahead of the destructive quake that all experts agree is inevitable. Our key questions were: How do we act now, before the big earthquake? What can we do to lessen the impact after it occurs?

The Los Angeles Earthquake project provided us with the impetus to explore and imagine what that this paradigm shift might look like. We seized what we consider to be a powerful opportunity to make a lasting contribution through design: devising a multimedia communication strategy to make people more aware of what could actually happen and how they could be better prepared.

We viewed this project as an invitation to explore new communication vehicles to disseminate important messages. The diverse mosaic that is the City of Los Angeles challenged us to search for culturally appropriate means of outreach that would resonate at a grassroots level with some of the most underserved populations, who will be at great risk during and after a catastrophic event.

Our contemporary digital context and explosion of participatory media platforms and social networks are powerful channels for learning and civic engagement. We tapped into these with the conviction that we can foster an unprecedented level of receptiveness to ideas that may galvanize the public to engage in preparedness as a matter of lifestyle and informed choice.

With a series of three interrelated components — a visual Sourcebook designed by Stefan Sagmeister with illustrations by Art Center alumni, students and faculty (to be released in Spring 2009 by Distributed Art Publishers), a public awareness campaign centered in its first phase around the launch on November 13th of After Shock, an online simulation created in partnership with the Institute for the Future, and a civic event, “The Get Ready Rally” on November 14th at the LA LIVE Nokia Plaza — The Los Angeles Earthquake: Get Ready project launches during ShakeOut week with the promise of starting an important new conversation. 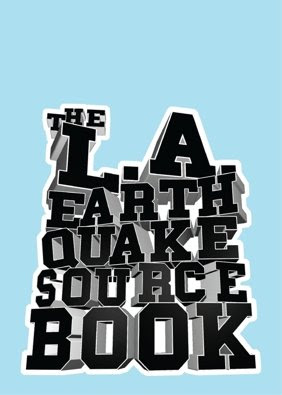 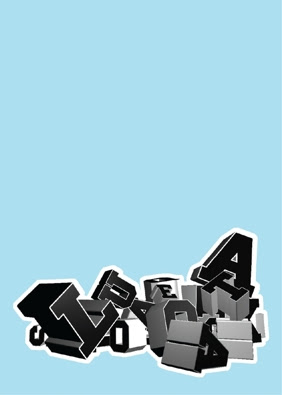 Stefan Sagmeister's identity design (front and cover) for The L.A. Earthquake Sourcebook, to be released by Distributed Arts Publishers D.A.P. in spring 2009.

The Great Southern California ShakeOut will feature the largest public preparedness drill in the U.S. history, and an unparalleled number of activities organized to inspire Southern Californians to get ready for the potentially enormous earthquake in our future. The basis for this effort is the ShakeOut Scenario, which models a probable 7.8 magnitude earthquake on the southernmost segment of the San Andreas Fault, identifying physical damages and estimating in great detail the cascading social and economic consequences of such an event.

Perhaps the most striking aspect of this comprehensive scientific study, led by Dr. Lucile Jones of the U.S. Geological Survey with over 300 contributors, is that it depicts an earthquake the likes of which no Californians (except the handful survivors from the San Francisco 1906 quake) have ever experienced — a disaster causing widespread regional damage, and precipitating a level of systemic disruption that our communities are ill-prepared to face. 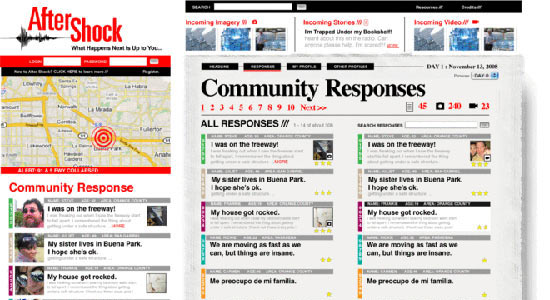 Basically taking at face value that people have no concept of the catastrophe that is possible, After Shock is the first massively collaborative online simulation of the individual and social impacts of a major earthquake on the communities of Southern California.

After Shock takes as its framework and master narrative the USGS ShakeOut Scenario as well, and will engage the public in an interactive experience for roughly four weeks immediately following the drill.

During this time, participants in the simulation (by the way, you do not necessarily need to be an Angelino to play) will receive daily missions that provoke them to think about how they would respond to effects of a major earthquake and to submit original media — emails, blog posts, photos, text messages, videos — documenting their responses.

Jason Tester, Research and Design Manager at the Institute for the Future and the Lead Storyteller for After Shock, which was designed by Art Center Graphic Design student Ryan D’Orazi, points to the innovation at the heart of this collaborative simulation-meets-alternate reality game structure: “Improving earthquake preparedness among Southern Californians is a fundamental goal of the game. At the same time, we need to trust the power of the game as a simulation experience. Simulations are powerful tools because they force participants to practice behaviors and prototype strategies in what attempts to feel real time. As opposed to the lack of urgency one may react to when confronted with the hypothetical tense of a traditional disaster preparedness campaign, here, all learning’s occur through the implicit experience of making a decision and seeing how future events are impacted by previous choices.”

What Happens Next is up to You


This is also After Shock’s tagline and the call to action overall that stems from the Los Angeles Earthquake: Get Ready project. It will be exciting to find out the impact of this comprehensive design effort in overcoming barriers to preparedness and hopefully moving us from a society in denial to a culture of possibility and individual responsibility.