GDC 2009: Challenges Of Designing An ARG 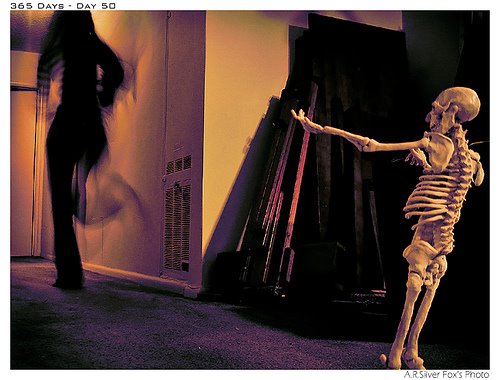 The purpose of the game is to study whether or not fitness and health can be achieved simply by playing a game that does not set out to explicitly teach anything.

This session will take the audience step-by-step through the design process of a specific serious ARG game that is played as much in the real-world as it is on a computer.

During the discussion of Skeleton Chase the focus will be on the challenges of designing an ARG which, due to its stated goal, has to tinker with fundamental principles of this type of game and still make it engaging and fun.

One of the critical challenges discussed will be limitations of designing a game that is meant to study itself as well as the people who play it. Skeleton Chase works by monitoring players through FitLinxx ActiPeds attached to their shoes.

Players are placed in a mystery involving conspiracies, experiments gone horribly wrong and the supernatural. The design of The Skeleton Chase is meant to create an experience more compelling than simple exercise, through strong gameplay engagement.

As teams of students follow every twist and turn in the narrative, solving puzzles, and other mental challenges, they engage in physical activities such as walking, running, swimming, climbing, etc. In fact through the course of the game play students will end up logging several miles per day for eight weeks. Baseline data has already been compiled. In the end both quantitative and qualitative data will be gathered through the ActiPeds, physical testing, interview and survey.

The talk will be the first public presentation of the project, sharing the reactions of the players to the gameplay experience and hopefully the preliminary results of the research.

Researchers, hospitals and insurers think so, which is why they’re investing time and money to develop interactive games that could change behavior—and perhaps help cut costs—in healthcare.

The Robert Wood Johnson Foundation, a not-for-profit philanthropy that focuses on the country’s most pressing healthcare needs, is leading these efforts through Health Games Research, an $8.25 million project funded through the foundation’s Pioneer Portfolio.

Established about five years ago, the Pioneer Portfolio considers innovative ideas that could “break the current paradigms of healthcare,” says Chinwe Onyekere, a program officer at the foundation who works with the Pioneer team.

In May, the foundation awarded more than $2 million to help bolster the evidence base that supports the development and use of interactive games for health purposes. A dozen institutions were granted up to $200,000 each to lead one- to-two-year studies of games that engage players who range in age from 8 to 98.

“We’re gaining insight into how people learn,” says Debra Lieberman, director of Health Games Research and a lecturer in the department of communication at the University of California at Santa Barbara, which is the program’s headquarters. “What I love is that people do this willingly. These games are so well-received,” she says, adding that it’s fun to watch how hard people try when playing a game.

Lieberman says she conducted a study of children ages 6 to 11 and asked if they preferred learning from a book, a video or a video game. She found that 49 of the 50 kids said they preferred a video game because it “lets you try things out.” She’s now trying to pull the over-30 generation into this world. “People say this will sugar-coat learning,” she says. “Learning is fun. Everyone loves to learn, but they need a reason to learn.”

Lieberman oversees the Health Games Research program that funds studies in topics ranging from how motion-based games may help stroke patients progress faster in physical therapy to how people in substance-abuse treatment programs can practice skills and behaviors in a virtual world of a game to prevent relapses in the real world. Lieberman said the program received 118 applications, and this year’s grant recipients excelled in three areas: feasibility of the study, research design and team experience.

One 2008 grantee was “BloomingLife: The Skeleton Chase,” an interactive game designed to promote physical activity and healthy lifestyles among college freshmen at Indiana University in Bloomington.

The School of Health, Physical Education and Recreation received $185,000 for this study, which involves a mystery on campus that takes eight weeks to solve as it unfolds in a variety of media: e-mail, Web sites, phone calls from fictional characters and physiological monitoring.

Two groups of 45 college freshmen—one collaborative, one competitive— have used this game as their laboratory component of their “Foundations of Fitness and Wellness” course.

The first iteration of The Skeleton Chase ran from September 24 to November 12 on the campus of Indiana University, Bloomington.

The goal was to study whether or not fitness and health can be achieved in a population of college students simply by them playing an ARG.
Players--constantly monitored by wireless FitLinxx ActiPeds attached to their shoes--were engulfed in a mystery involving conspiracies, experiments gone horribly wrong and the supernatural.

As teams of students followed every twist and turn in the narrative, solving puzzles, and other mental challenges, they engaged in physical activities such as walking, running, climbing, etc. In fact during the eight weeks students ended up logging several miles per day playing the game.

A sequel, targeting the IU student population at large, is scheduled to run this spring: Skeleton Chase 2: The Psychic.