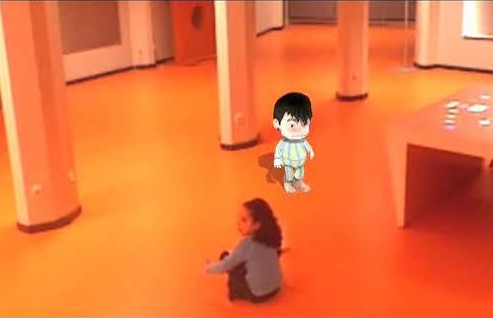 Following my prior posting YDreams: Serious Games For An Interactive Future, Ydreams has just uploaded to Vimeo an upgraded version of the April 2008 demo, where Flapi, YDreams' in-house mascot, and other virtual characters interact in real-time with a little girl and other physical obstacles in a new seamless augmented playground environment.

Following other YDreams’ products with AR, such as the Virtual Sightseeing Scenic Viewer and augmented books, SimVideo extends the possibilities of these technology applications by providing a large set of tracking, simulation and composition functionalities with very low hardware requirements, due to a very powerful proprietary platform.

With this technology YDreams envision applications such as real time competition with F1 drivers during a Grand Prix TV transmission, the re-enactment of famous movies, performing alongside or replacing ones favorite actors (imagine Woody Allen´s Broadway Danny Rose inverted) and an enormous variety of augmented reality applications.

With SimVideo, video feeds that are either live or pre-recorded can gain new levels of interest through the addition of an individual layer of contextualized interactivity.

The main idea is merging real and virtual life in a seamless universe that tends to become one.