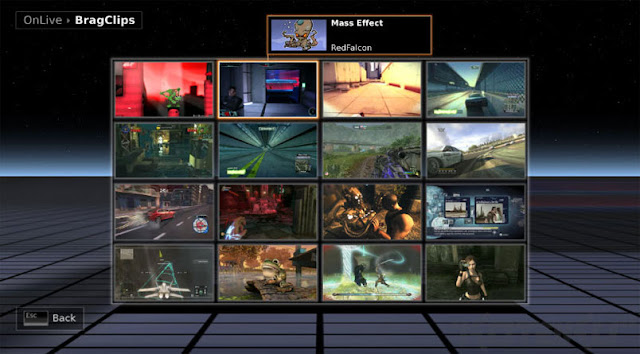 “OnLive Could Eventually Sweep Through All Forms of Entertainment and Applications, Providing the Missing Link in Helping the Internet Take Over Our Living Rooms”(VentureBeat - March 23rd, 2009)

OnLive is promising to launch the world’s highest performance Games On Demand service, instantly delivering the latest high-end titles over home broadband Internet to the TV (via the OnLive MicroConsole™ about the size of a small paperback book) and entry-level PCs and Macs (via a small browser plug-in).

OnLive, together with its Mova subsidiary, lies directly at the nexus of several key trends, all of which are reshaping the way we think about and use digital media:

· The shift to cloud computing, displacing the limitations, cost and complexity of local computing;
· An explosion of consumer broadband connectivity, bringing fast bandwidth to the home;
· Unprecedented innovation, creativity and expansion within the video game market.


Pioneering the delivery of rich interactive media to the home, OnLive may change the way that entertainment applications are created, delivered and consumed. 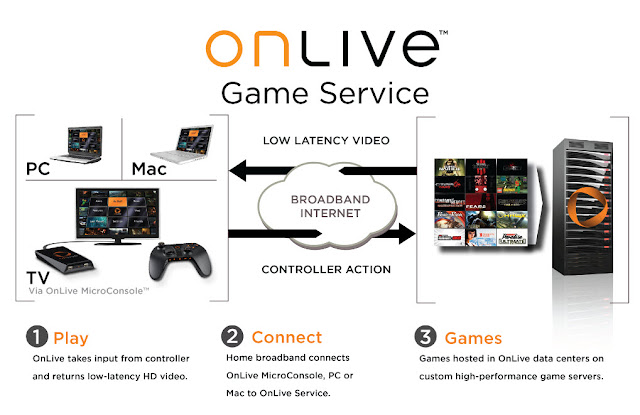 Perlman says OnLive has developed a data compression technology and an accompanying online game service that allows game computation to be done in distant servers, rather than on game consoles or high-end computers. So rather than buying games at stores, gamers could play them across the network — without downloading them.

According to VentureBeat, at "New OnLive Service Could Turn The Video Game World Upside Down", “few start-ups have a chance to revolutionize an industry. But if OnLive lives up to its goals, the company will disrupt the entire video game industry.”

This post title “Turning Homes into Game Theaters” actually leverages on this possibility.

The service, scheduled to go prime time this winter, has so far signed up nine game publishers, including heavy hitters such as Ubisoft, Electronic Arts, Take-Two Interactive Software and THQ.

Headed by Steve Perlman and Mike McGarvey, the Palo Alto start-up threatens to obliterate the traditional business model because it doesn’t require consumers to pay hundreds of dollars for new consoles every five or so years. That’s a pretty big earthquake in a $46 billion worldwide industry ruled by three hardware makers who sell powerful consoles. If this happens, the obvious losers are Microsoft, Sony and Nintendo.

Beyond console makers, makers of PCs and high-end chips will be affected. The micro-console is so simple it has a custom chip but very little else. It is a lightweight box that has a universal serial bus (USB) power connector, a high-definition multimedia interface (HDMI) connector to hook up with a TV, and an Ethernet jack for a broadband connection. You can plug a standard PC game controller or computer mouse into it.

Losers would include the makers of high-end chips such as Intel, Advanced Micro Devices and Nvidia. However, Perlman noted that Nvidia will benefit to a degree because OnLive’s data centers use high-end graphics chips in their servers. Nvidia has been a development partner in helping to create the server technology

“It’s not clear which model will prevail, but I have no doubt that, 10 years from now, this is how we will be playing games,” said Geoff Keighley, executive in charge of game content at MTV Networks. "The idea of cloud computing for games is very attractive."

Publishers theoretically like it because they don't have to make and distribute discs. They also don't have to revamp their development and research efforts every five or so years to accommodate new consoles.

The OnLive model may also appeal to publishers, who will likely derive greater revenue per sale than is derived through conventional retail distribution. Instead of 20 percent of the game's purchase price going to retail and another 20 percent to the console manufacturer, OnLive will likely charge around 30 percent of the proceeds, with the balance going to the publisher, according to some market analysts.

The model also does an end-run around the sale of used games, which can cut into new-game sales since there are no discs to resell.

Consumers are supposed to benefit from not having to fork over hundreds of dollars on new consoles or continuously upgrade their computers and graphics cards to play the latest games. 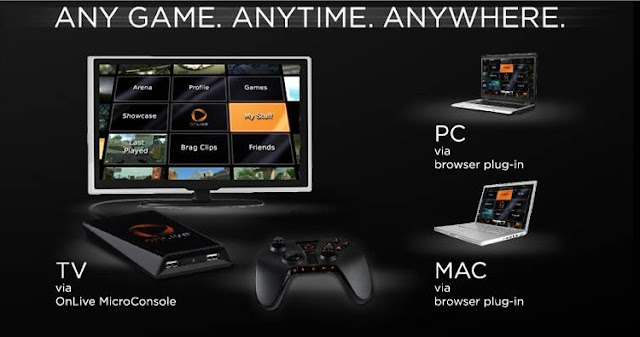 Gamers are very picky about how a game feels and how fast it responds," Keighley said. "What happens if your kids are chatting online and your wife is shopping on Amazon and uploading photos? Will there be enough bandwidth left for you?"

Perlman, said his company has been able to cut down the lag to one millisecond from the player's controller to OnLive's central server and back to the controller, though he declines to explain just how this is accomplished.

Another challenge for OnLive is persuading consumers to subscribe to the service. McGarvey, who ran Tomb Raider developer Eidos as chief executive for a dozen years until 2005, said the company plans to charge players an undisclosed subscription fee. Players would then have to pay additional fees to rent or buy games.

If OnLive charges full retail prices for their games, consumers may not bite, said Joseph Olin, president of the Academy of Interactive Arts & Sciences. "There's a great deal of price sensitivity today," Olin said. "If you want people to go entirely digital, you'll have to offer something more than just the convenience of getting a game instantly."

But OnLive may not get to set lower prices. That's because game publishers are afraid of running afoul of Best Buy, Wal-Mart and other retailers (which provide the majority of the industry's sales) by offering lower-priced versions of their games elsewhere.

“This is clearly the future of games," Keighley said. "But OnLive faces a challenging business model."

The concept was originally evangelized as the “telecosm” by George Gilder in the pre-bubble days of the 1990s.

Gilder thought that the Internet would “hollow out” the PC, meaning that Intel and Microsoft would become less important because their products would become commoditized. If you could spread processing loads across broadband connections, that would obviate the need for a powerful PC in the home. That is, you could do a lot of computing in the centralized Internet server, pass that data over fast Internet pipes, and do very little processing in the client-side computer in the home.

Back then, a lot of people felt Gilder was out of touch with reality. Larry Ellison, Oracle’s chief, tried selling a Network Computer, but it never got of the ground. The idea has now evolved into cloud computing

As consumers began to demand data-heavy software such as video over the Internet or high-end games, people needed more powerful PCs. Fast computers in the home made up for relatively slow broadband connections. But Gilder’s idea could now make a comeback, thanks to OnLive’s ability to compress data 200-fold, as well as the fact that broadband is more pervasive and the demand for ever more powerful computers has stalled.

With OnLive, players can join each other in the same multiplayer game, regardless of whether they have a PC, Mac or OnLive’s own micro-console (a simple box with minimal processing power) connected to a TV. Such cross-platform game play usually isn’t possible. 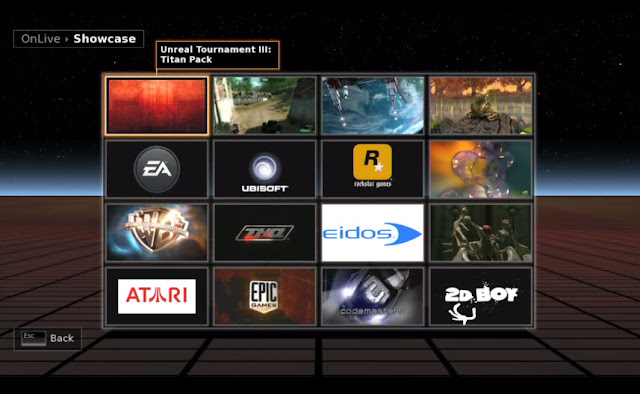 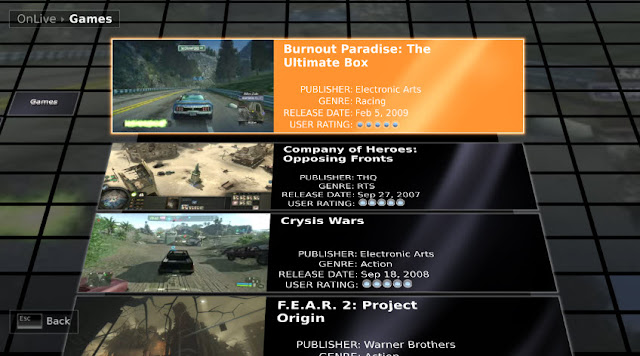 The user interface is built around a grid of clickable windows, with any one of them running video clips as previews for what’s behind the window. You can select a window to play a particular game or watch a demo. 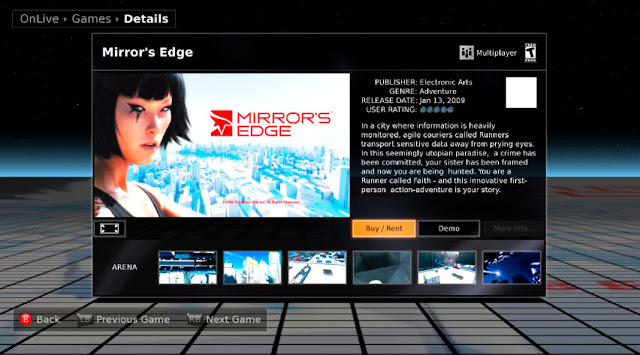 After playing a game, you can share video with players of the most interesting sequence in your game in a window dubbed “Brag clip.” You can also be a spectator and watch how the most skillful players in the rankings play the game. Or you can chat via voice headset with your friends. 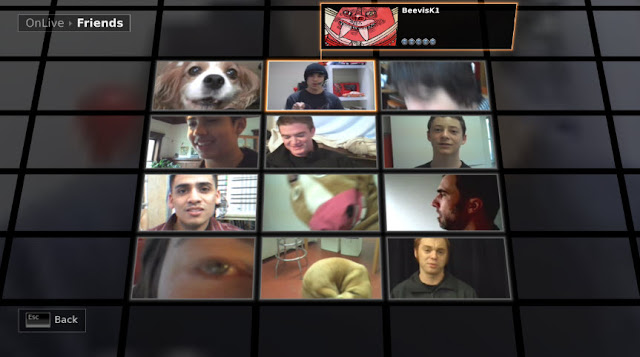 Versions of these social features are available in a few games now. But with OnLive, every game can have these features.

How does it work?

The secret sauce in OnLive’s technology is its compression algorithms. On the home device, the only software component OnLive needs is a one-megabyte plug-in for a standard Internet browser. That code is enough to decompress the data and display it. Normally, decompression takes much more hardware.

The algorithms change the structure and order of Internet data, or packets, so they can sail through the Internet. A packet can make an entire round trip in 80 milliseconds, a very short amount of time compared to other Internet traffic that travels through hardware that either compresses or decompresses the data.

A lot of people have chased after the Holy Grail of games delivered and played via the internet. But they have been stymied either by slow computing power or by broadband choke points.

The compression is so good that players can play games even if their homes are as much as 1,000 miles away from the server. For now, OnLive needs only five data center locations to be able to cover the entire country.

Of course, there are some limitations. The technology isn’t quite good enough to be able to do 1080p resolution, which is the highest available on game consoles and TVs. That’s because it would require broadband speeds of up to 10 megabits per second. Countries such as Japan have those speeds, but you have to pay a premium for that kind of service in the U.S.

One nice side-effect of OnLive’s service for game publishers and developers is that it promises to cut down on piracy. Since there’s no call for users to download games to their computer or console, there’s nothing to copy or steal. Gamers simply buy a subscription or rent a game online. McGarvey estimated that currently for every $60 game sold, game piracy results in $12 in lost revenues for the publisher or developer.

Game publishers could also frequently update their games on OnLive by changing the code running on the servers. If one part of a game is too hard, the publishers can simply patch that part and then everyone will play the new version the next time they log in.

Publishers can also pull the plug on games that aren’t selling well without taking a big inventory hit and they can add new episodes of popular games quickly, much like the TV networks cancel unpopular shows and add episodes for successful pilots.

If OnLive can establish itself as a reliable, competitive and easy to use service, it has the potential to eventually sweep through all forms of entertainment and applications, providing the missing link in helping the Internet take over our living rooms.” 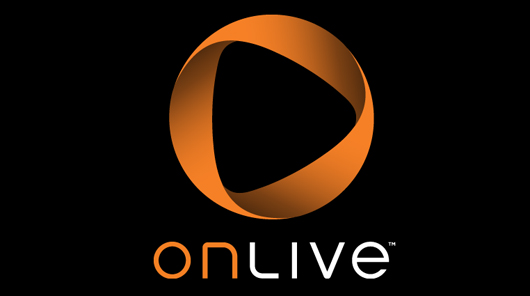