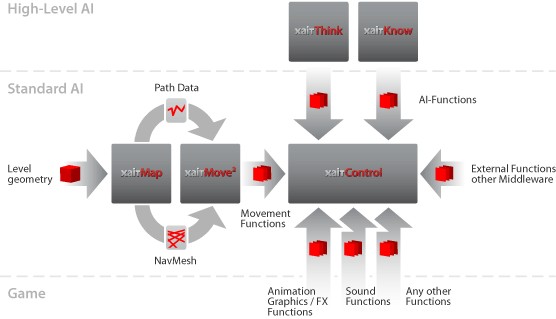 Saarbrücken/Quierschied, Germany - July 14th 2009 – xaitment GmbH,one of the leading developers and service providers of artificial intelligence (AI) for the games and simulation industries, today announced the release of xaitMap 2.5, the first in a series of upgrades to its AI toolset. The new version offers game developers a completely new graphical interface with which to simplify the design of navigation meshes (NavMesh) based on any given level geometry. Additional features like geometry tagging, batched builds, a project wizard and the support of pathfinding objects like spawn points and blocking areas further increase xaitMap’s ease of use. 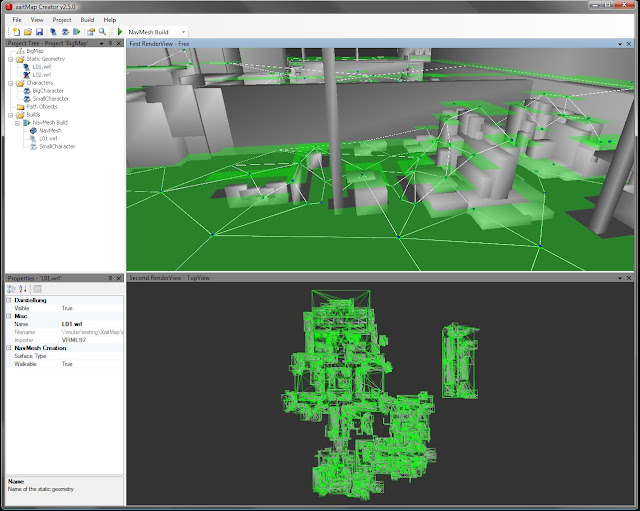 Like all existing and upcoming modules of the xaitment toolbox, xaitMap 2.5 eases the workflow of game development teams. Not only can it be integrated with any in-house tool in a studio’s pipeline with a minimum of time and effort; xaitMap 2.5 has been specifically designed to accelerate the adjustment of builds and the automatic modification of NavMeshes. Moreover, the new graphical interface minimizes mistakes that can result from complex AI programming.

“xaitMap 2.5 offers all game developers a powerful AI game tool that helps save production costs while giving development teams the opportunity to effectively reach their creative potential,” says Dr. Andreas Gerber, Group CEO of xaitment. xaitMap 2.5 is easy to integrate into existing development environments and simple to operate. Stand-alone or together in combination with other xaitment AI game tools, it offers everything developers need for the successful development of artificial intelligence in a game production.“

xaitMap 2.5 consists of the graphical interface, xaitMap Creator, and the xaitMap Library. Together, these solutions use a unique spatial subdivision technique for creating navigation meshes. The navigation meshes are created automatically by simply entering specifications about the environment and the non-player characters (NPCs) into a NavMesh Generator. The NavMesh is generated in a matter of seconds, enabling developers to easily make changes to the game map and to experiment with many different designs in order to improve the gameplay.

Like all xaitment AI game tools, xaitMap 2.5 is a stand-alone module and can be bought separately. xaitment supports small and large development teams with cost-effective license-based models, integration and training services.