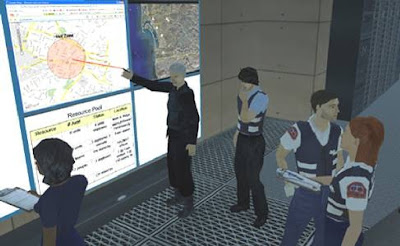 OLIVE 2.3 Release Provides IT Readiness and Usability Enhancements Along With New Collaboration and Training Features

The release includes IT readiness enhancements for web process integration, user authentication, and client packaging, as well as user adoption features to improve the initial download and orientation experience for first time users.

Many large commercial and government organizations had successful pilots with OLIVE in 2008, some of which were captured as case studies in the Recipe for Success with Enterprise Virtual Worlds whitepaper.

In response to these organization’s positive feedback Forterra has developed the IT readiness features so these organizations can integrate OLIVE with their IT systems and web infrastructure in preparation for larger scale deployments.

IT can now integrate OLIVE based virtual meetings into web based intranets, extranets or portals, and be assured of the user’s identity based on authentication systems like LDAP. The 2.3 release enables integrating 3D meetings and events into existing web-based communities to foster enhanced brain-storming and design sessions, faster decision-making, and rapid relationship building.

The OLIVE 2.3 release improves the simplicity and speed for new users to join an OLIVE meeting. The small download install process embedded into web-based user registration processes mean new users can participate in a 3D virtual meeting within 5 minutes of an invitation. The new audio tuning wizard enables new users to quickly talk and listen with a headset using the spatially accurate 3D audio in OLIVE.

The addition of an API to integrate artificial intelligence middleware with a new Scenario Editor and a Media Dashboard feature will enable virtual Emergency Operation Centers to embed rehearsal environments around the various disasters team members must prepare for. Homeland security departments can now invite associated agencies to participate in drills or situation assessments virtually without having to be co-located.

"Everyone is excited about the transformational capabilities that virtual worlds will provide to business processes, but there have been historical challenges getting the platforms IT ready and widely used by all types of users,” noted Dave Rolston, Forterra CEO. "We are pleased to provide the features to now support the large-scale deployments our most advanced customers are planning for."

The key OLIVE capabilities being released this month include:

Forterra Systems is a leader in providing enterprise-grade virtual world technology for the corporate, healthcare, government, education, and entertainment industries.