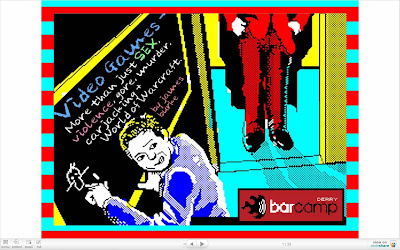 Via: Burkey’s Blog - Slides from Barcamp Derry - The History of (A) Video Games and [B] Serious Games A Barcamp is an informal, free, and participatory conference style event where the content is provided by the participants. They take place all over the world (including some great recent events in Belfast and Dublin) and are open to anyone who’d like to come along.

Not only is Barcamp a great chance to learn and discuss ideas in an informal environment but it’s also a great social event.

Held on October 10th 2009, at the University of Ulster, Magee, Barcamp Derry was an informal, one-day event for anyone interested in the web, technology or digital media.

James Burke was one of the speakers with the presentation Video Games - More Than Just Violence, Gore, Murder, Carjacking and World of Warcraft.

His talk aimed to show that Serious Games research is constantly providing  positive results in relation to games being used to teach, train, educate and rehabilitate.

James has included a very brief history of video games, a round-up of Serious Games (e-learning, exergame, rehabilitation) and a look at his ongoing research at the University of Ulster, Coleraine, where he is investigating the use of video game design for post-stroke rehabilitation.

At the end of the talk, he promised to upload his slides to his blog and they are now available on SlideShare, so they can viewed online or downloaded for offline/viewing or editing. You can find them below, right after  "About James Burke" summary.

James Burke In His Own Words

James Burke is currently a PhD student at the University of Ulster, Coleraine, Northern Ireland, investigating the potential benefits video game design and novel technology can bring to stroke rehabilitation. Video games, music and geeky technology are his main passions in life, as well as a love for anything that adds a bit of fun and enjoyment to life.

He has programming experience in the realms of C#, Microsoft XNA, C++, Java, PHP, Javascript and HTML. In addition to these languages he is never to shy away from learning new things.

If you’re interested in his academic achievements, you can find a list of his publications here or get in contact via his email address - james [at] burkazoid [dot] com.

Side A – A Brief History of Video Games

Side B – Serious Games & My Work at UUC