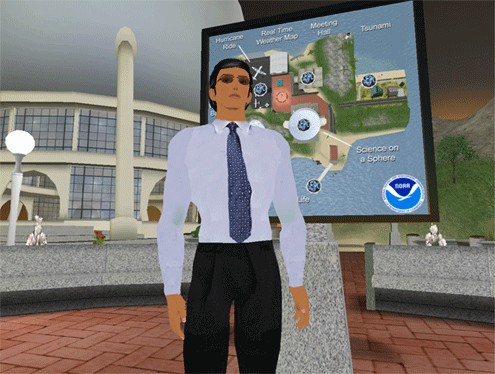 by Richard Hackathorn
Published: 21 March 2007
Author's note: A contributor to this article is Eric Hackathorn, who is responsible for the development of NOAA Island in Second Life as an example of using virtual worlds for science outreach.

"There is a convergence of new technologies that I believe will change the nature of business intelligence (BI) in enterprises. Several decades of advances have evolved business intelligence from passive reporting to active involvement. We are not only moving data and its analysis closer to people, but people are interacting at deeper cognitive levels. It has become part of their professional lives both rationally and emotionally.

Consider an analogy. Around the 13th century in Italy, eyeglasses were a novelty. People would wear glasses and feel the novelty, rather than see the world differently. Most of us now put on glasses instinctively every morning and see the world more clearly. Through our glasses, we perceive a consistent view of reality and feel the implication of that reality. They are a necessity of modern life that has become fully blended with our lives. A similar technology is a cell phone, which is rapidly blending into our lives for social networking – seeing our social world more clearly.

Just as we have matured from text-based command interfaces to graphical user interfaces, business intelligence will be created and delivered in the environment of virtual worlds using the tools of "Serious Games" to imitate and manage processes in our real enterprises.

There are four levels of serious games: observe, experiment, collaborate, and manage.

First, an observe game implies that the interaction with the virtual model is limited to watching the behavior of a virtual system with a predetermined set of parameters.

An example of an observe game is the Real-Time Weather Reporting on NOAA Island in Second Life, as shown below. 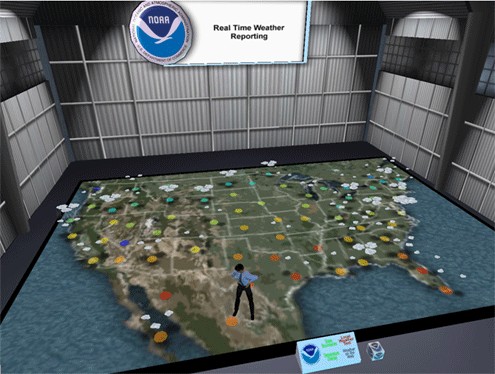 In this virtual world, the 30 meters square display shows the current weather over the continental United States, updated every five minutes. As shown in Figure 3, the circle color indicates the current temperature, while the clouds indicate general conditions. It is raining in San Francisco.

You can walk around the display and watch the weather patterns from various perspectives. You can turn on state boundaries. However, you cannot change weather parameters (such as temperature) and see the results of those changes. Hence, this is an example of an observe game.

Second, an experiment game implies an observe game plus the interaction that can change parameters to produce a predicted result and then observe the simulated results. Comparisons can be made between predicted and simulated to understand the dynamic of the model. Further, comparisons can be made between the simulated results and actual observations in the real world to improve the validity of the model.

Third, a collaborate game implies an experiment game plus multiple persons can simultaneously interact with the model. The social interaction adds new dimensions in coordination and collaboration. The assumption is that the resulting quality will be better if many individuals can collaborate together within an effective environment.


Fourth, a manage game implies a collaborate game plus the interaction can change parameters, not only in the virtual system, but also to control the real system. Comparisons of the simulated versus actual behavior can be used to manage the real system toward desirable goals.

The ultimate "Serious Game" for an enterprise is, therefore, business performance management – a framework for organizing, automating, and analyzing the business methodologies, metrics, processes, and systems that drive business performance. BI plays a key role in providing the analysis infrastructure supported by the enterprise data warehouse.

The ultimate serious game for society could possibly be the recent proposal for a Climate Collaboratorium by the MIT Center for Collective Intelligence.

The objective is to leverage the combined intelligence of thousands of individuals to develop and execute innovative solutions to the global climate change problem, which is “the most pressing and important problem currently facing humanity.”

In conclusion, ponder the following questions. How would a data warehouse for global climate change be designed and implemented? How would relevant data be compiled into the warehouse? And, how would this data be distributed? How would analytical tools be integrated with the warehouse? And, how would these tools be made available to perhaps millions of people? What is the framework for multiple serious games that would focus attention on the critical issues? What is the attributes for a virtual world that would highlight the simulation of potential solutions. Finally, how would this infrastructure be used to inspire responsible and informed action by governments, industry, and the general public?