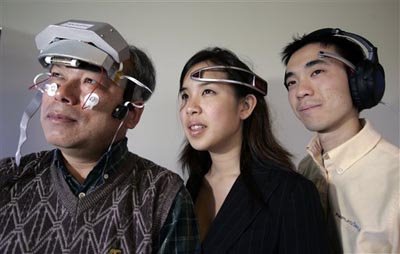 Emotiv Systems and NeuroSky, two young companies based in California, plan to transport the measurement of brain waves from the medical sphere into the realm of computer games.…

Technology from NeuroSky and other startups like Emotiv Systems could make video games more mentally stimulating and realistic. It could even enable players to control video game characters or avatars in virtual worlds with nothing but their thoughts.

NeuroSky's prototype measures a person's baseline brain-wave activity, including signals that relate to concentration, relaxation and anxiety. The technology ranks performance in each category on a scale of 1 to 100, and the numbers change as a person thinks about relaxing images, focuses intently, or gets kicked, interrupted or otherwise distracted.

The technology is similar to more sensitive, expensive equipment that athletes use to achieve peak performance. Koo Hyoung Lee, a NeuroSky co-founder from South Korea, used biofeedback to improve concentration and relaxation techniques for members of his country's Olympic archery team.

Boosters say toys with even the most basic brain wave-reading technology -- scheduled to debut later this year -- could boost mental focus and help kids with attention deficit hyperactivity disorder, autism and mood disorders. 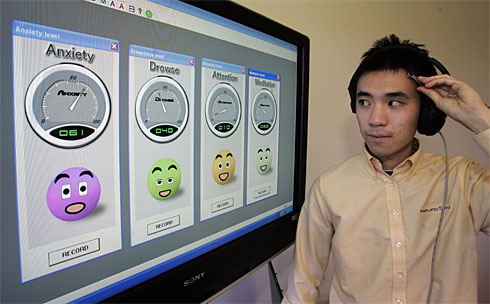 But scientific research is scant 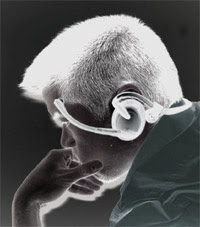 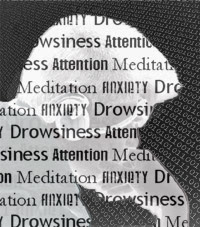 Elkhonon Goldberg, clinical professor of neurology at New York University, said the toys might catch on in a society obsessed with optimizing performance -- but he was skeptical they'd reduce the severity of major behavioral disorders.

"These techniques are used usually in clinical contexts. The gaming companies are trying to push the envelope," said Goldberg, author of "The Wisdom Paradox: How Your Mind Can Grow Stronger As Your Brain Grows Older." "You can use computers to improve the cognitive abilities, but it's an art."

The basis of many brain wave-reading games is electroencephalography, or EEG, the measurement of the brain's electrical activity through electrodes placed on the scalp. EEG has been a mainstay of psychiatry for decades.
An EEG headset in a research hospital may have 100 or more electrodes that attach to the scalp with a conductive gel. It could cost tens of thousands of dollars.

But the price and size of EEG hardware is shrinking. NeuroSky's "dry-active" sensors don't require gel, are the size of a thumbnail, and could be put into a headset that retails for as little as $20, said NeuroSky CEO Stanley Yang.

Yang is secretive about his company's product lineup because of a nondisclosure agreement with the manufacturer. But he said an international toy manufacturer plans to unveil an inexpensive gizmo with an embedded NeuroSky biosensor at the Japan Toy Association's trade show in late June. A U.S. version is scheduled to debut at the American International Fall Toy Show in October.

"Whatever we sell, it will work on 100 percent or almost 100 percent of people out there, no matter what the condition, temperature, indoor or outdoors," Yang said. "We aim for wearable technology that everyone can put on and go without failure, as easy as the iPod."

Researchers at NeuroSky and other startups are also building prototypes of toys that use electromyography (EMG), which records twitches and other muscular movements, and electrooculography (EOG), which measures changes in the retina.

While NeuroSky's headset has one electrode, Emotiv Systems Inc. has developed a gel-free headset with 18 sensors. Besides monitoring basic changes in mood and focus, Emotiv's bulkier headset detects brain waves indicating smiles, blinks, laughter, even conscious thoughts and unconscious emotions. Players could kick or punch their video game opponent -- without a joystick or mouse.

The 30-person company hopes to begin selling a consumer headset next year, but executives would not speculate on price. A prototype hooks up to gaming consoles such as the Nintendo Wii, Sony PlayStation 3 and Microsoft Xbox 360.

Le, a 29-year-old Australian woman, said the company decided in 2004 to target gamers because they would generate the most revenue -- but eventually Emotive will build equipment for clinical use.

The technology could enable paralyzed people to "move" in virtual realty; people with obsessive-compulsive disorders could measure their anxiety levels, then adjust medication accordingly.

The notion of using brain activity to interact with computers isn't new. A number of schools--such as the University of Minnesota; University of California, San Diego; and Purdue--have research labs devoted to decoding thoughts from the brain and manipulating cursors on a screen, which is especially useful for disabled people.

But here, and in relation to games, Emotiv systems has three different applications:

One is designed to sense facial expressions such as winks, grimaces, and smiles and transfer them, in real time, to an avatar. This could be useful in virtual-world games, such as Second Life, in which it takes a fair amount of training to learn how to express emotions and actions through a keyboard.

Another application detects two emotional states, such as excitement and calm. These unconscious cues could be used to modify a game's soundtrack or to affect the way that virtual characters interact with a player.

The third set of software can detect a handful of conscious intentions that can be used to push, pull, rotate, and lift objects in a virtual world.

"It fulfills the fantasy of telekinesis," said Tan Le, co-founder and president of San Francisco-based Emotiv.