ARTag: Serious Games To Easily Create Your Own AR 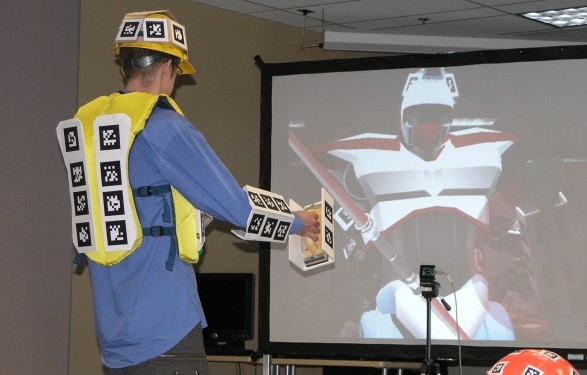 Via: ARTag Net, and Digital Urban

In augmented reality (AR), users wear specialized glasses or look through a modified viewing screen to see the real world, as well as augmentations in the virtual world.

AR differs from virtual reality because users can interact with the physical world while still seeing the virtual augmentations. The most commonly used form of AR is the "Heads Up Display" in some aircraft that allows pilots to see the ground below them in addition to superimposed virtual targets.

A basic challenge in AR is to track a user's viewpoint in real-time, which is normally done using a video camera. The most successful method of tracking is to use a predefined 2D pattern, relative to which virtual objects are drawn.
The goal of the Real-Time Video-Based Augmented Reality project is to improve the tracking technology of such patterns.

Ultimately, researchers hope to track the camera path in real-time in an unstructured environment, which can be used in both augmented reality and model building applications. 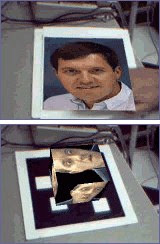 The two pictures show the augmentation of virtual objects onto the planar scene. One shows a 2d picture being augmented, and the other shows a 3d cube being augmented. Both are augmented in real-time

ARTag is an "Augmented Reality" system where virtual objects, games, and animations appear to enter the real world.

3D graphics is added in real time to video, similar to "view matching" in Hollywood, except that with Augmented Reality it is happening online.

ARTag "Magic Lens" and "Magic Mirror" systems use arrays of the square ARTag markers added to objects or the environment allowing a computer vision algorithm to calculate the camera "pose" in real time, allowing the CG (computer graphics) virtual camera to be aligned. This gives the illusion of 3D animations or video games to appear to belong in the real world.

There are two ways to use ARTag AR; "Magic Lens" and "Magic Mirror".

With a "Magic Lens", a user holds a tablet PC, PDA, or camera cell phone (or any computer device with a dispLay and camera) and looks "through" it to see the mixture of real and virtual reality.

ARTag can also be used in a "Magic Mirror" mode, in which a single video camera looks out from near a screen and the user sees his or her "reflection" in the screen, with virtual objects superimposed on the real-world image. 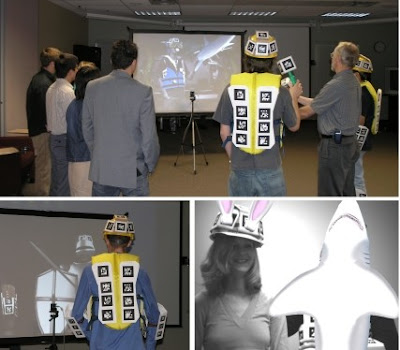 A Magic Lens system is mostly a private experience, every user needs their own hardware, whereas in a "Magic Mirror" system a single video camera looks out from near a large screen and users see their "reflection" with 3D content added.