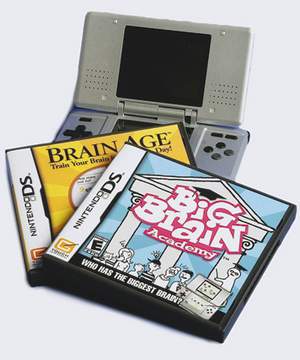 Given the wealth of areas covered around cognitive and emotional training, and in order to make our life easier, SharpBrains is now offering a Monthly Digest of the Most Popular Blog Posts. It works like a monthly Brain Exercise Magazine, where the most popular posts of the month get listed.

Among July posts, there is a collection of recent announcements in the "brain games" or "brain training games" space.

Strain your brain the smart way

People of all ages are pursuing to keep their minds sharp and, hopefully, prevent or slow the possible onset of memory loss as they age.

That may explain the glut of cognitive games and puzzles packing store shelves and Web sites, whilst books feature a variety of "mind-benders to flex your mental muscles," including "The Everything Brain Strain Book" and "Keep Your Brain Fit." 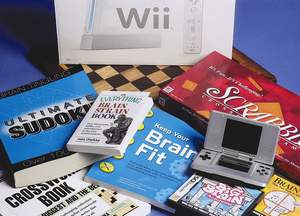 Video game systems are getting into the brain game, too, by marketing to older adults.

George Harrison, Nintendo's senior vice president of marketing and corporate communications, has said that more than half of the company's marketing for Wii is aimed at adults. And the system has been presented at conventions for the aging "gray gamer" population. 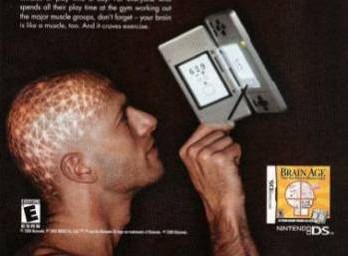 "That old cliche, 'Use it or lose it,' definitely applies. You have to exercise your mind as much as you exercise your body," says neurologist Kenneth Sharlin, who works with psychologist William Myers in neurology and behavioral health at Doctors Hospital of Springfield.

Research shows that people with higher education tend to have some protective effect against Alzheimer's, he says. Doing cognitive activities can offer protection, too, according to the new study. Effects of Cognitive Training Interventions With Older Adults.

That's because the process of learning creates positive physical changes in your brain by increasing connections between nerve cells, Sharlin says.

Nintendo's strategy to attack a broader demographic has not only helped turn the company around, its success has helped spark industrywide changes in the way games are sold, and who plays them.

Shorter, less complex games, more user-friendly controllers like the Nintendo's motion-sensitive Wii, and online features have become the norm as the entire gaming industry pushes aggressively to attract customers outside the 16-to-25 year-old male demographic.

Females now make up about 30% of the people who buy Nintendo's Wii game console, said George Harrison. Typically, the percentage of females buying consoles is less than 10%.

Meanwhile, the company is spending heavily to market its games to more women and seniors, especially in Europe, where actress Nicole Kidman is pitching a new lineup of "brain-training" games aimed at seniors.

The Wii is proving to be a market force. It is outselling Sony Corp.'s (SNE) PlayStation 3 console by four to one and Microsoft's Xbox 360 console by two to one in the U.S., the world's largest videogame market, according to NPD Group Inc. In Japan, Wii sales have been even stronger, outselling the PS3 six to one last month and the XBox 360 by even more, according to the latest survey by market-research firm Enterbrain Inc.