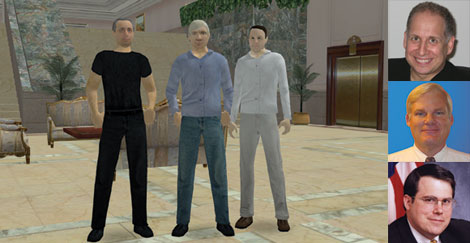 “With the signs of life becoming stronger every day in the technology sector, it’s time to take stock of some key initiatives that have the potential to transform major industries or that are likely to squander huge amounts of money, time and resources,” said Glenn Zorpette, executive editor, IEEE Spectrum. “IEEE Spectrum editors considered well over a hundred technology projects, representing work on every continent. We picked five outstanding ones, along with six that seem destined for obscurity.”

“As a lifelong admirer of the IEEE organization this selection is an incredible honor given the wide field of technologies considered,” said Dr. David Rolston, CEO of Forterra Systems. “However we agree 2008 will be an inflection point in our industry as more proof points are published about enterprise business processes being transformed by 3D applications. We will be making exciting announcements this year about customers using virtual applications for new forms of training and collaboration. Fundamentally, we are addressing how enterprises and their extended ecosystems can work more productively and effectively by operating virtually. Within 3 to 5 years we envision the typical business worker spending large portions of their day in immersive 3D environments.”

Developed by Forterra Systems of New York City and San Mateo, Calif., OLIVE creates virtual worlds for customers in health care, the military, and the media. MTV Networks uses OLIVE to create online worlds based on its television shows; surfers can take dips in pixelated hot tubs with bikinied beauties from the Virtual Real World or customize shiny hubcaps on a flame-red hot rod in Virtual Pimp My Car.

But most of OLIVE’s applications are available by invitation only, primarily for the purpose of training staff. The U.S. National Institutes of Health is creating a world that tests industrial workers’ skills at responding to emergency disasters—think guys in hazmat suits wandering through toxic sludge like something from Doom. Retail chains use OLIVE to run employees through mock scenarios. In one ­demonstration, a new cashier inside a virtual surf shop has to cool down a hotheaded customer (operated by a corporate trainer) by choosing the right mix of body ­language and dialogue.

“There’s a generation coming into the workforce that sees nothing unusual in a world unfolding on a computer screen,” says Steve Prentice, vice president and director of research for Gartner Research, a technology research firm based in Stamford, Conn. “Also, complex environments are becoming more critical, and the cost of staging real-world simulation training exercises is escalating.”

Investors are taking notice. Virtual Worlds Management, a tracking firm in Austin, Texas, says that technology and media firms have put more than US $1 billion into 35 virtual-world companies, chief among them Club Penguin, a children’s site that the Walt Disney Co. recently acquired for $700 million. Forterra just received seed capital for OLIVE from In-Q-Tel of Arlington, Va., the strategic investment firm of the U.S. intelligence community (fittingly enough, the amount of the capital was secret).

David Rolston, Forterra’s chief executive officer, fell in love with the idea of virtual worlds long before there was a practical way to implement it. After completing a Ph.D. in computer science and artificial intelligence and an M.S. in management systems engineering at Arizona State University in Tempe, Rolston spent years building out the early Internet. He worked on artificial intelligence for Honeywell, on software simulation for a start-up called Multigen-Paradigm (where he was chief executive), and on graphics chips for ATI (where he was vice president of engineering). He continued to nurse an interest in virtual worlds during his days at Silicon Graphics in the mid-1990s.

“We’d do demonstrations of virtual worlds, but at the end we’d say, ‘By the way, you have to buy a $500 000 computer to run this,’ ” he says. “Then it’d get really quiet.” Reason: most of the hardware capable of running a virtual world was in the hands of the military, which had invested heavily in simulation technology.

So that’s where Forterra went for some of its first customers—and also for some of its talent. In August, Forterra hired Michael Macedonia, a Ph.D. in computer science who had been running the U.S. Army’s simulation, training, and instrumentation program in Orlando, Fla. He estimates that the mili­tary spends $10 billion a year on simu­lations. The simulations range from sprawling war games in the desert, with soldiers shooting laser beams instead of bullets, to one called Full Spectrum Warrior, in which players lead troops in realistic skirmishes.

OLIVE has its roots in There.com, a virtual-world site created by a Stanford engineer named Will Harvey and launched in 1998. In 2005, There.com spun off Forterra not to sell the virtual worlds themselves but to sell the tools with which to make them. “Rather than be a walled garden, like AOL,” says Forterra president Robert Gehorsam, “we said, ‘Let’s create a platform that works with open standards that can be used in all kinds of areas.’ ”

The idea was novel, but what really mattered was the timing. By this point, Moore’s Law and other forces had brought to the commercial world the necessary hardware capabilities, in the form of broadband, inexpensive graphics cards, and easy-to-use tools to create content. With that infrastructure in hand, OLIVE is all you need to make the magic happen.

One main difference between an OLIVE world and other virtual worlds is the OLIVE world’s “purpose-driven” intent, says Gehorsam. Rather than make the kind of free-form environment found in EverQuest (the massively multiplayer online game from Sony Online Entertainment, Gehorsam’s former employer), OLIVE’s customers want worlds that impart particular skills—like dealing with irate customers or safely disposing of bombs.

OLIVE consists of a suite of applications and tools that enable customers to build worlds accessed through PCs—up to thousands of them—that are connected through a high-speed network to five servers. The brains, called the OLIVE Core, reside on those five machines: a simulation server, which handles object simulation and interaction in real time; a communications server, which routes the simulations and communication content, such as voice over Internet Protocol (VoIP); an application server, which maintains such information as the user’s account information; a database server; and a cluster management server, to facilitate software updates.

The tools are designed for a layman. For example, you can quickly fill your world with prefabricated objects that can be customized simply by changing the associated parameters—an operating table can be elongated, a closet full of uniforms can be changed to women’s dresses. Changes appear on the monitor instantly. If you want to exert still more control over your world’s look and feel—say, how fast a virtual cougar runs in a safari simulation or how much smoke billows up from a forest fire—you can do it by making changes within the source code of the application program interface, using C++ programming language.

The designers worked hard to give OLIVE’s avatars gestures and inflections that are natural enough to fully involve users in the world. A customer who wants to enhance these details can employ third-party plug-ins and software, such as FaceGen, which transforms an ordinary digital photograph into a three-dimensional character. When the users communicate with one another through microphones and headsets, they can use VoIP. The audio is spatially accurate, adjusting in volume and location in proportion to the user’s distance from the speaker.