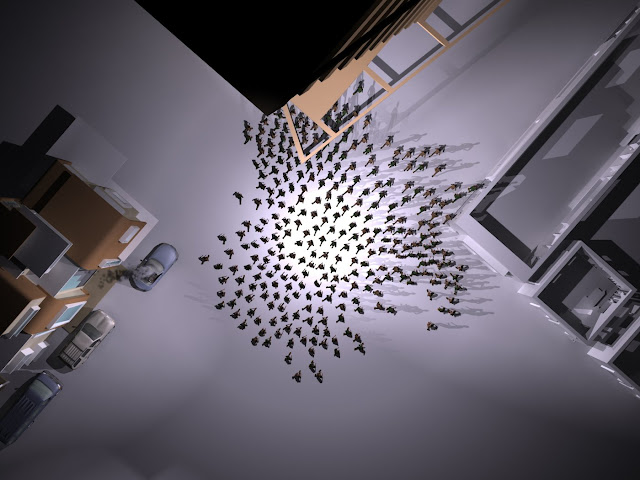 Simulated people, or "agents," run from a burning car. The simulation tries to predict how real people would react in such an emergency. Credit: Paul Torrens, Arizona State University.

Via: Discover Magazine - The Sim That Saves People from Each Other
and Arizona State University - Geographer designs computer model to predict crowd behavior

Scientists who want to see how a crowd behaves in an emergency can now shout “Fire!” on a city street and watch everyone panic and run thanks to a newly developed computer simulation.

The 3-D model starts with patterns of human behavior and movement and uses them to simulate the behavior of a crowd in mob situations and pedestrian habits under certain building configurations, resulting in a virtual crowd video.

"Crowds are vital to the lifeblood of our cities,” said the model’s creator, Paul Torrens of Arizona State University. But, he adds, it is impractical “to establish live experiments with hundreds or thousands of people along busy streetscapes, to reproduce mob behavior during riots for the purposes of academic experimentation, or, to expect to replicate the life and death behavior under emergency situations in a fabricated fashion.”

”Torrens’s model uses what he calls an “agent-based methodology.” He can put individual people, or “agents,” each with different characteristics of age, sex, size and health, into the model and have them process information about the world around them. Their unique characteristic combinations make the agents interpret that information and react in different ways. 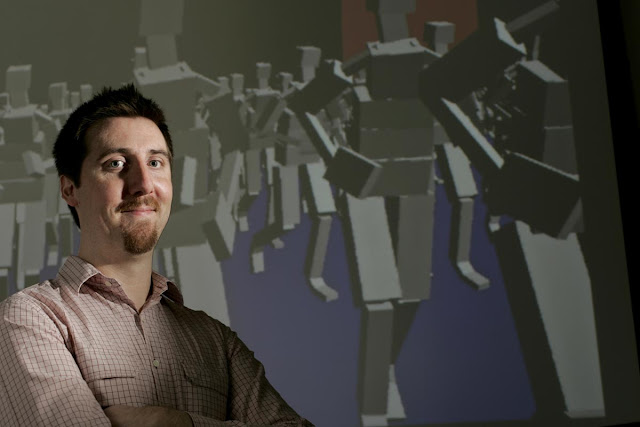 “It’s the same way we process information in the real world,” Torrens said. Though you’re not aware of it, when you walk down a crowded street, your brain is constantly monitoring your surroundings and planning the path you will take to your destination while simultaneously monitoring for obstacles.

A prototype that Torrens has developed models the evacuation of a crowded area during a fire when there is only one point of escape, but he has used his method to develop a primitive model of a situation in which a disease spreads through casual contact, and he is attempting to create scenarios in which agitated crowds turn into unruly mobs. 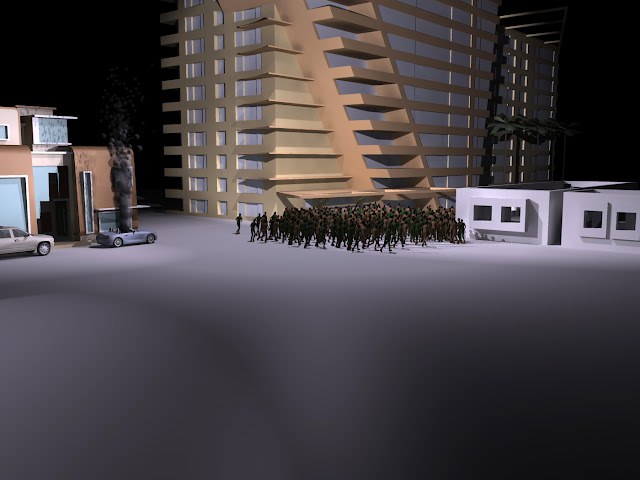 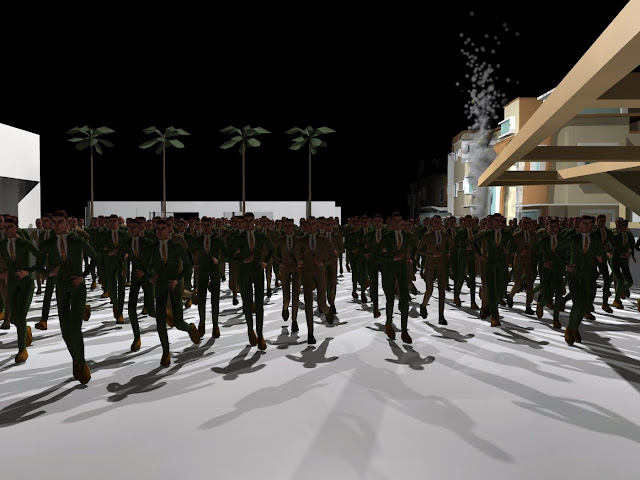 Torrens drops 300 of these agents on an urban street, where a convertible catches fire on the side of the road. The fire is generated by a physically realistic model with smoke, embers, and mobile toxins. The virtual pedestrians are subject to real-world hazards: they can trip or fall, and even catch fire. All are instructed to evacuate the area to safety on the right side of the image.

The model could also be used in planning cities to optimize walking space for pedestrians and alleviate congestion.