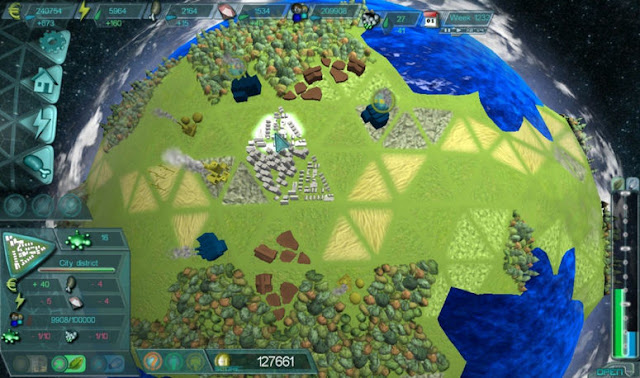 Via: Washington Post - Not the Usual Game Application
By Mike Musgrove
Sunday, June 22, 2008

Microsoft is encouraging use of XNA Game Studio with student developers via the Game Development track in its annual Imagine Cup technology competition, that is wrapping up in Paris next month.

The challenge, presented to student programmers and game designers around the world, is to develop a game that demonstrates the challenges and benefits of working toward a greener, more sustainable world.

The environment is one of those topics with an array of variables that play to the strengths of gaming software, which can be designed to show the consequences of a variety of actions. How do you balance the needs of a growing population against the need to preserve forests and wildlife? To what extent is it worth investing in more environmentally friendly, but more expensive, technology?

The Imagine Cup competition is down to six finalists. In one of the finalists' games, players are charged with cleaning up a region of France hit with pollution. In another, players take control of a virtual globe to try to figure out where best to put farms, cities and power plants so they provide the most benefit and produce the least harm to the planet's air and water. Microsoft plans to distribute some of the environmentally themed games as downloads on the Xbox Live service.

Chris Satchell, a manager in Microsoft's game division who is overseeing the project, said it had not been determined whether the titles would be available free or whether there would be a charge for the games. But "it would be very cool to use the profits [from game sales] to help the issues," he said.

Microsoft showed off the six finalists’ games earlier this month at the Expo Night at the Games for Change Festival in New York City. The winner will be chosen at an upcoming Finals event in Paris next month.

Via: Shacknews - Gaming for Social Change and the Environment

This year's contest, based around the environment and powered by Microsoft's XNA Game Studio technology, received over 160 entries from 10,000 college-age students.

Of those, six games were chosen by a panel of judges to compete in the finals, the prizes of which include cash and an internship at Microsoft. Ranging from simple 2D titles to complex 3D efforts, the finalists are presented below. Because they were all developed within XNA Game Studio, these games can be distributed on Windows and through the Xbox 360 community games service later this year. 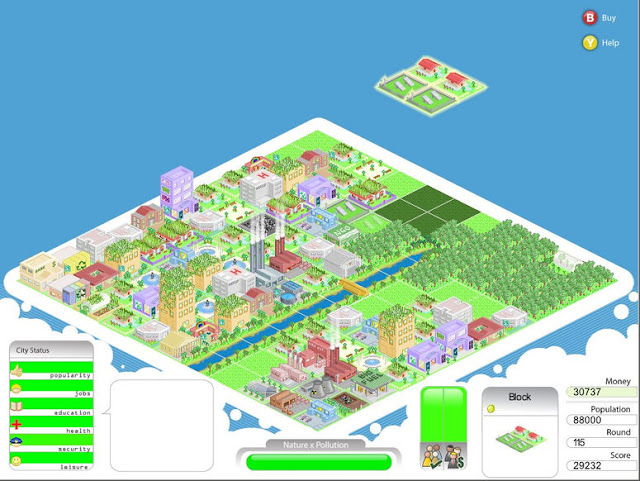 In this single player 3D "Sim City meets Tetris" learn about Urbanism, Ecology, and maintaining a Sustainable Environment. As buildings drop from the sky, strategically place them on the grid so the community can grow whil still being ecologically mindful. Encounter challenges throughout the campaign that will help your community thrive. Team Members: Rafael Costa, Guilherme Campos, Helena Van Kampen , Tulio Marques Soria. 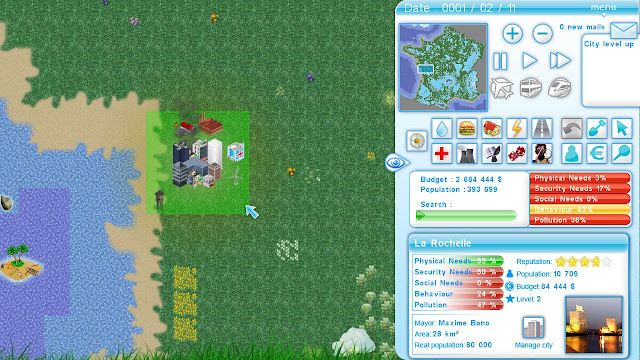 Single player 2D campaign of an over polluted universe that needs to be rebuilt. Rebuild the universe one city at a time by making smart choices for power that won't pollute your community. Tools throughout the game help you make the right eco friendly choices for power. Choose the wrong source and your community will not flourish. Succeed by rebuilding each community by increasing population and decreasing pollution. Team Members: Frederic Pedro, Nicolas Gryman, Anthony Chen, Maximilien Paitel. 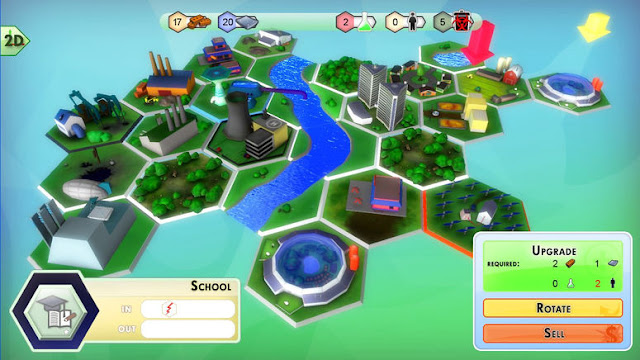 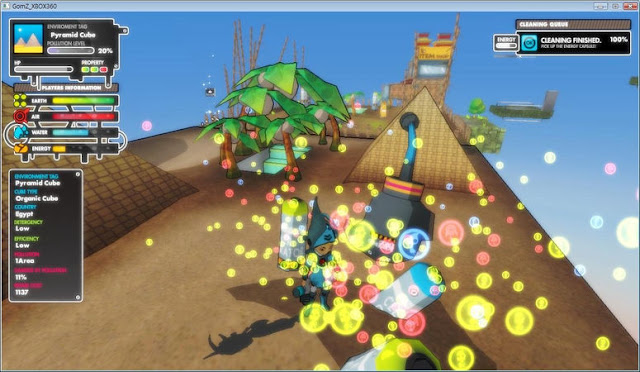 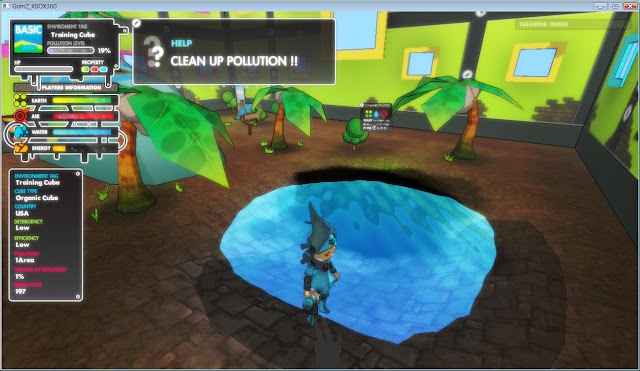 Single player 3D campaign to create and maintain your own cube (living space) with the help of cleaners, nano machines that have the ability to turn pollutants into energy. Protect your cube by removing pollution and turning it into useful energy so your cube can sustain itself. 3 rd person view lets you control your character your cube Gather the appropriate cleaners from Earth, Air, Water and Energy to help you clean a particular pollutant. Team Members: Dong Hoon Kim, Ki Hwan Kim, Min My Park. 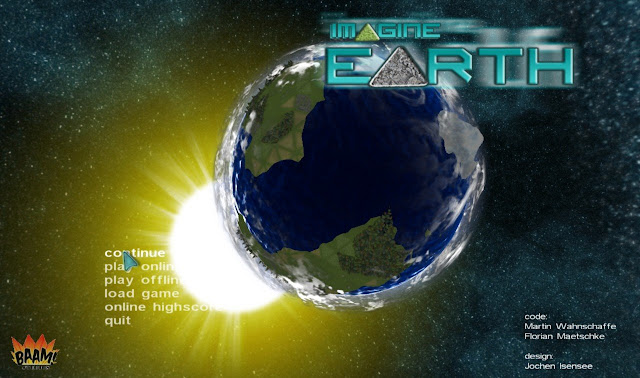 Single player earth simulation game. Your central goal is to build up a strong, growing population and healthy environment. To achieve this you can build cities, power on a 3D earth which is segmented into many fields. In the course of the game pollution will become a big problem. Some of your buildings pollute the surrounding ground, others pollute the air. Research opportunities come up along the way to help develop new technologies that reduce this pollution. Team Members: Florian Maetschke, Jens Jochen Isensee, Martin Wahnschaffe. 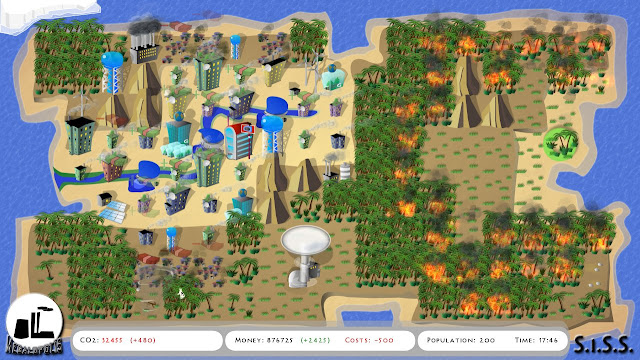 Single player game takes control of a robot who has control over the ecological and economical growth of an island. The player tries to get the highest score by managing an island for 10 virtual years. Build power plants and the most efficient living conditions for the human inhabitants. Keep a good balance between quick expansion, income and environmental sustainability. In the end the number of people living on his island and the carbon dioxide emission are the keys to beat the highscore. Team Members: Florian Leckebusch , Frank Goetz, Ingo Koster.