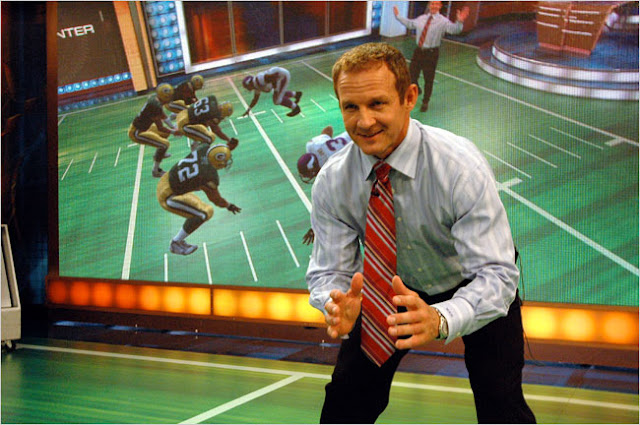 Merril Hoge in ESPN’s studios in front of N.F.L. plays

On his latest post he reports that the sports channel, ESPN, is starting to merge Madden game graphics with real-life sports anchors. Using this technology commentators are able to interact with realistic, 3D virtual players while explaining key plays and strategy.

Here are the highlights of The New York Times original article, by BROOKS BARNES, published today.

LOS ANGELES — ESPN, the cable powerhouse that calls itself “Worldwide Leader in Sports,” is looking to extend its domain in virtual worlds by merging video game graphics with real-life sports anchors.

The network, which is owned by the Walt Disney Company, has spent the last year working on a new technology with Electronic Arts (EA) Sports, that would allow ESPN commentators to interact live with realistic-looking, three-dimensional virtual players.

“It’s a way for us to remain relevant,” said John Skipper, ESPN’s executive vice president for content. “We want to make sure we remain connected to lots and lots of fans, and using the language that gamers understand is one way.” 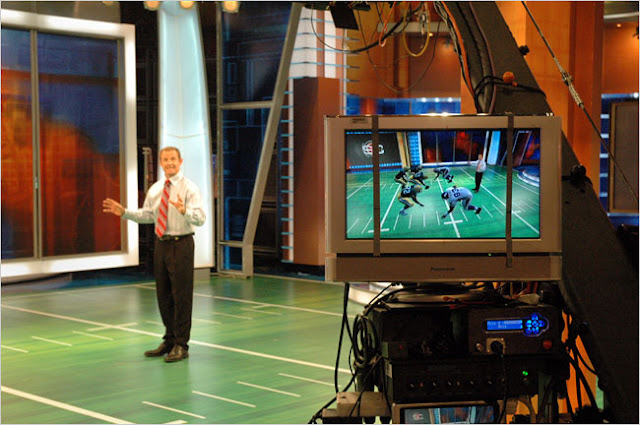 A monitor at ESPN’s studios displays Merril Hoge’s image inserted into the computer-generated images of football players, showing what home viewers would see

The technology, which will make its debut this Sunday on ESPN’s popular “NFL Countdown” program, involves using an Electronic Arts’ title — Madden NFL 09 — with specialized digital camera equipment in the studio. Instead of using the technology, called EA Sports Virtual Playbook, to tell viewers what to look for before games, ESPN wants to use it in reverse to play the ultimate Monday morning quarterback. Using real information from a game, ESPN anchors could reprogram an actual sequence to show, for example, what would have happened had Peyton Manning thrown right instead of left.

“We think this will wow our viewers,” said Stephanie Druley, a senior ESPN producer who oversees N.F.L. studio programming. “No one has seen this before.”

EA Sports, a division of Electronic Arts, had a business goal of its own in developing the technology. The unit is actively moving toward a broader sports and entertainment enterprise to speed up growth. Licensing technology is a main part of the strategy.

ESPN will also showcase Virtual Playbook on programs like “Monday Night Countdown,” “NFL Live,” and, occasionally, “SportsCenter.” The network hopes to expand the feature to analysis of other sports like basketball and soccer, said Anthony Bailey, vice president for emerging technology at ESPN.