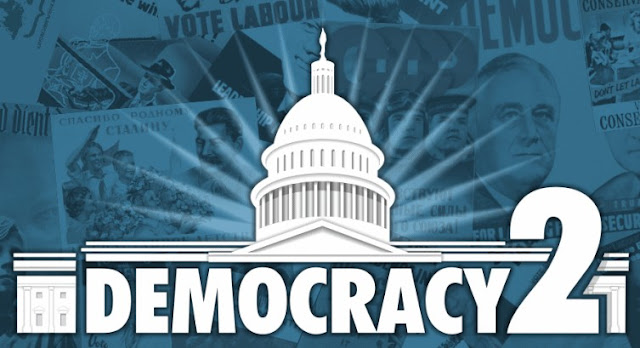 Democracy is a political strategy / simulation game that was first developed by Positech Games in 2005, with a sequel - Democracy 2 - released in December 2007.

The player acts as if he/she were the president or prime minister of a democratic government. The player must introduce and alter policies in seven areas - tax, economy, welfare, foreign policy, transport, law and order and public services. Each policy has an effect on the happiness of various voter groups and as president or prime minister, it's your job to balance the need for income from taxes against the demands of the voters:

Do you want your country to be an eco-friendly green paradise? Will you pander to the patriots, the liberals or the religious pressure groups? Can you keep crime under control without destroying the civil liberties of your citizens?

The games designer has described the code behind the game as being based on a neural network. This has allowed the game to be very easily modded, and most of the 'game logic' in it is openly editable in simple text CSV files, allowing players to change the way the core mechanics of the game operate. 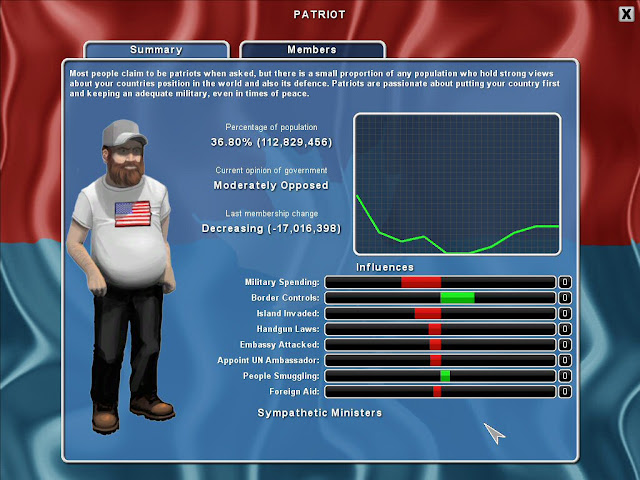 Democracy 2 is very similar to Democracy in terms of gameplay, but it differs from the original in that it uses fictional nations (although modders have converted the real nations from the original for play on the new version), and has numerous new features, including party membership, terrorism and real world statistical data.

Many of the previously existing features have been enhanced: for example, the amount of political capital needed to change a policy now differs depending on which policy one is changing, and whether one is introducing it, raising it, lowering it, or cancelling it.

Democracy 2 looks daunting at first, but the game is easy to pick up once you understand the basic principle behind it. An innovative user-interface shows the relationships between everything in the game just by hovering your mouse over an object.

The game is 'turn based', so it's the ideal game for those who prefer an intelligent, cerebral game. The amount of actions you can take each turn is limited, so you will need to think carefully if you are doing the right thing.

The key to the game are the policy 'sliders' that let you adjust how your government runs. You can raise or lower taxes with a slider, or even adjust education policy or workers rights in exactly the same way. This system makes for a game that is easy to learn and difficult to master. 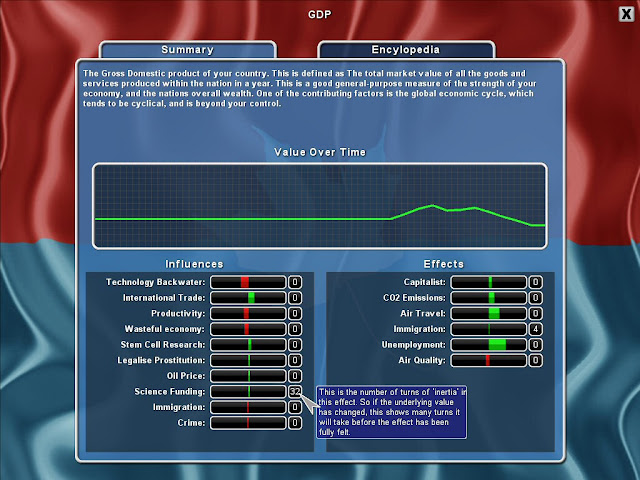 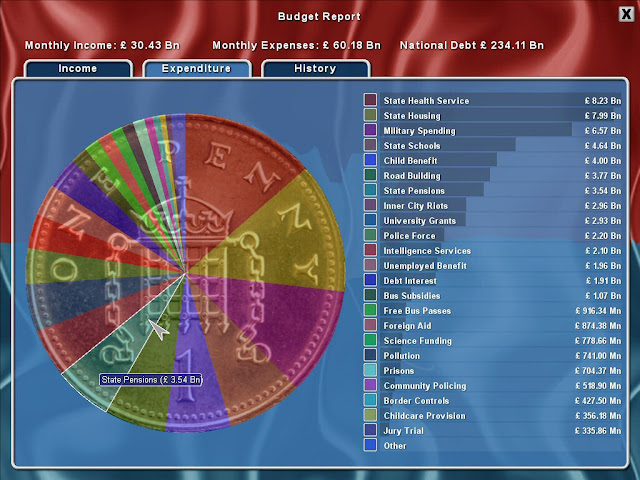 Democracy 2 covers the whole range of political opinion and policy, from debates over stem cell research and school prayer, through the provision of state health care and benefit payments to the unemployed, right across to tax shelters for the wealthy, the death penalty, military spending and civil rights.

Regardless of where you stand on political topics, you will have the option to put your ideology to the test. This newer version of the game has a vastly increased selection of policies, far greater accuracy of simulation, and subtlety of gameplay, and also features a selection of real world statistical data for comparison to help you put political choices in context.

Also new to Democracy 2 is the concept of cabinet ministers. Each area of policy now has a minister, appointed by you, and with their own loyalty and political opinion. You need to keep the ministers happy if you are to generate enough 'political capital' to successfully push through the more controversial policies. 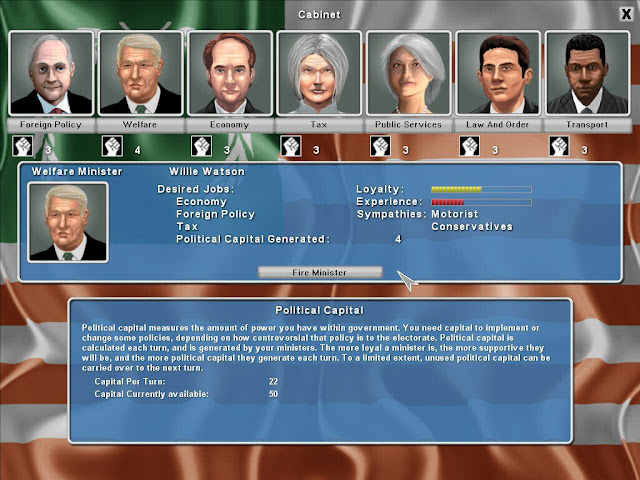 In Democracy 2, every policy has a varying level of controversy which will affect how easily it is changed. Introduce school buses? No problem, but attempt to introduce or repeal the death penalty of military conscription and you can expect to need strong political backing!

The game also has a totally re coded voter system. You no longer have a voter who is just a socialist, motorist and a farmer, but they have 'fractional' membership of many groups. You have hardcore (100%) motorists who will drive no matter what, and casual motorists who only use a car occasionally and are easily persuaded on to public transport. This system works throughout the game to give Democracy 2 an even finer and subtler simulation. Voters also join and leave political parties, and have a variable tendency to vote. They can even join terrorist organizations when especially upset.

Democracy 2 comes with a free playable demo so you can see exactly what you are getting, hosted on a fast no-wait, no ads direct download.

You buy the game directly from the developers, with no middle men, and no need to wait for a CD, as the game is provided as a 'digital download'.

There is also a Democracy Wiki available at http://democracygame.wikia.com/wiki/Main_Page.

Positech Games is a one man company based in the UK (England).

It was formed by gaming geek Cliff Harris in 1997 when he was working as an IT support guy. Cliff has been writing and selling games for 10 years now. Cliff does all the programming and 80% of the art for his games. He also handles all the tech support, web design and marketing of the games.

Cliff used to work for a UK company called Elixir, who did Republic and Evil Genius. After that he worked at Lionhead as an AI / Game coder for 'The Movies'. When that game finished he left to work for himself full-time. At the start of 2006, Cliff worked for Maxis on a 'gameplay prototype' for the 'Sims' franchise, and then he started making games just for his own company.