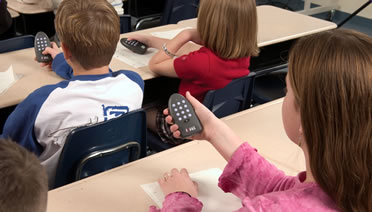 Following my prior post eInstruction™ Contest Recognizes Use Of Technology In The Classroom, and with a little more than a week remaining in its Interactive Classroom Makeover Contest, eInstruction announces today the names of five judges who will evaluate the submitted videos for the second annual contest.

The judges will select five finalists from each of the following three grade level segments: kindergarten through fifth; sixth through eighth; and ninth through 12th. Once the finalists are announced, the judges will collaborate to choose one final winner from each segment.

Each judge has a different background in the education sector and will solicit feedback from within their communities to help select the videos that best meet the contest criteria:
· How effective the entry is in demonstrating use of technology in the classroom
· The extent to which the entry demonstrates collaboration between the student(s) and teacher(s) in creating the video
· Overall creativity and spirit of the entry

eInstruction recently announced the company’s second video contest to recognize teachers and students for their creativity and use of technology in the classroom. Participants in this contest are asked to create a short music video parodying the song of their choice. The videos will be posted on the contest Web site where the public can vote for their favorite. Votes from the community will determine 30 percent of the video’s final score and the panel of judges will determine the remaining 70 percent.

The first judge, Andrew Schlessinger, is president and CEO of Schlessinger Media, the award-winning programming division of Library Video Company that distributes a library of over 17,000 licensed educational videos. Schlessinger is also CEO and co-creator of Safari Montage, that will be donating a plug & play video-on-demand server that comes preloaded with educational programs to each of the winners. He will be selecting the contest’s finalists based on videos that are both engaging and educational. In short, he wants to hear a good story and see a fun video that involves the students.

“The video submissions thus far have been excellent, and I’m anticipating more outstanding videos yet to come,” said Schlessinger. “I’ll be looking for how students can creatively use video to engage and educate on the importance of technology in the classroom.”

Brent Hayes, national sales manager at Precision Media Group and Canadian distributor for eInstruction, will be looking for enthusiasm in the student videos to help him make his decision on which classroom deserves to win eInstruction’s Interactive Classroom Makeover.

“The contest is an unparalleled opportunity for students and teachers to work together to creatively employ technology in their everyday lessons,” said Hayes. “I’ll be looking for student/teacher groups that take an enthusiastic approach to developing a video that captivates the viewer. I will also be looking to see if the students and teachers really understand the technology displayed in their videos.”

Scott Walker is an education technology blogger from TeacherTechBlog.com, one of the top educational blogs online, as well as the technology and video production teacher at Bate Middle School in Danville , Ky. Walker is the advisor for the school’s Student Technology Leadership Program (STLP), a student group that focuses on Web site design, digital art, video editing and computer repairs.

“There are so many simple tools that not only give people tremendous creative freedom of expression, but they also provide innovative ways of learning,” says Walker . “I’m really excited to see the way young people and their teachers are grasping and putting new video and audio technology to work.”

Richard Colosi, first grade teacher at Canandaigua Primary School , is the K-5 winner of the first Interwrite Makeover™ Video Contest. Last year, his first grade class won the dream classroom makeover by creating and submitting a video that exceeded last year’s judges’ wildest expectations. Colosi will be looking for an original idea, how well it’s executed and overall quality of the video—similar to the qualities his winning video showcased.

“I’m eager to see how inventive the teachers and students are in terms of using technology, how well the video is produced and whether the understanding of technology is truly demonstrated,” said Colosi. “I want to see a video that motivates others to use technology after viewing. To me, originality is a key factor in making a video stand out.”

In accordance with the right to a jury of ones’ peers, the last judge, Alex Guseman is an 11th grader at Howard High School in Ellicott City, Md. Guseman plans to link the videos through his Facebook page in order to gauge opinions from a variety of his peers and teachers. Along with the feedback he receives, Guseman will be judging the videos based on their creative quality and noticeable effort.

“In my opinion, a winning video should use imagination to demonstrate the power of classroom technology,” said Guseman. “I want it to inspire me.”

The five respective finalists will be announced on October 31, 2008, and the one final winner from each grade segment will be announced on December 3, 2008. Each interactive makeover is valued at approximately $25,000, with a total of more than $75,000 in prizes to be awarded. Included in that is a celebration party for each winning entry’s entire school.
For more information on eInstruction’s interactive learning solutions, please visit http://www.einstruction.com.

eInstruction pioneered the first student response system for the education market during the 1980s. Its Classroom Performance System (CPS) provides instructors and students with real-time feedback on comprehension during instruction.

Today CPS remains the leading student response system in education, being used by millions of students, teachers and professors in 300,000 K-12 classrooms and at more than 1,300 higher education institutions worldwide.

In 2006, eInstruction acquired FSCreations and integrated its ExamView® and Learning Series content into CPS; so instructors can seamlessly use publisher and proprietary question banks in lesson plans, quizzes and tests with eInstruction technology. The result is an integrated system for instruction and assessment with real-time feedback.

In 2008, eInstruction joined forces with Interwrite Learning®, another premier global provider of interactive learning solutions to the primary, secondary and higher education markets.