Google Gets Serious About AdSense For Games 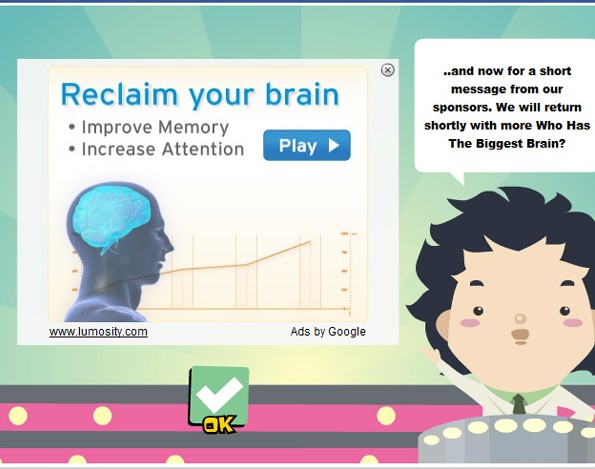 Here’s an example of the Google AdSense for Games Integration
You are not bothered with ads during the game. At the end of the game Google AdSense comes up and a few seconds later OK button shows up. AdSense is extremely well blended: a game character introduces a video ad saying something like "And now, a word from our sponsor"

“Advertisers are turning to in-game ads because it’s one of the only ways to reach young male gamers who have stopped watching TV.”

“If the company enters the market, it should stir up the competition the way it has in other ad markets. Companies such as Double Fusion, IGA Worldwide, Microsoft’s Massive, MochiMedia and NeoEdge Networks have been carving out niches with in-game or wrap-around ads for some time.”

All of the companies know the potential of the market. As in-game advertising market is poised for explosive growth, estimations of the growth of the in-game ad market have been varied: Microsoft's internal estimates put in-game advertising at about $1 billion per year by 2010. The Yankee Group predicts revenues at $732 million in the same time frame.

Google Inc. announced last Wednesday it is launching the beta version of AdSense for Games, a technology designed to put relevant advertising in Web-based games.

It is an expansion of Google's AdSense program, which matches ads to the content of Web sites. Similarly, AdSense for Games will show, for example, ads targeted at young men in sports and action games. The ads themselves would be videos that players watch before or after a game, or after completing a level.

According to Christian Oestlien, the senior product manager for AdSense for Games, the program's beta launch will focus on the placement of a variety of forms of ads in Flash-based casual games and some larger titles.

In the beginning at least, Oestlien said, Google will work with partners like PlayFish, Mochi Media, Demand Media and Konami. The latter, Oestlien said, would use AdSense for Games to place ads in well-known titles like Frogger and Dance Dance Revolution.

"By (Google) finally launching in the space," said DoubleFusion CEO Jonathan Epstein, "it confirms for all parties...that this space is of interest to one of the largest media companies in the world. Google does not enter into markets that don't have billion dollar-plus potential for them."

To Epstein, having Google plant its flag in the in-game ads space shows everyone that games cannot be taken lightly as an ad platform, no matter what other choices advertisers have for their dollars.

"The battleground here is not between us and Massive and Google," Epstein said. "It's getting games their rightful share of the ad dollars, as opposed to TV, print, and (traditional) online ads."

For its part, Google is well aware that it will have several significant competitors, but still thinks it can set itself apart.

According to Oestlien, Google intends to do so by leveraging its network of thousands of advertiser partners, as well as its proven experience helping those partners with the placement of effective print, image- and Flash-based creative ads.

Google's entry into the gaming space has long been anticipated and could be a hedge against slippage in online advertising from the economic downturn. Google bought Adscape Media, a small in-game advertising company, in early 2007, less than a year after Microsoft Corp. bought in-game ad company Massive Inc.

And some think that while Google may have its work cut out for it in the games space in the short-term, the AdSense for Games move is really part of a long-term play involving several different media.