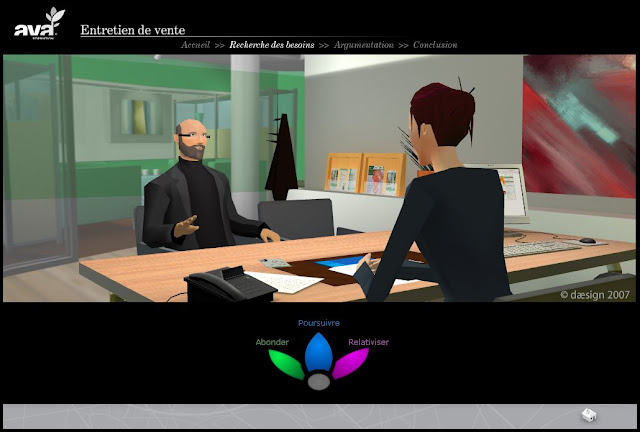 Daesign (formerly known as Dramaera) is a provider of interactive training solutions and animation products including computer games and educational programs. Founded in 1994 and headquartered in Annecy, France, daesign is one of the European "Serious Games" market leaders.

Daesign devoted more than 6 years to an R&D project (in collaboration with IRISA (CNRS of Rennes) and Laval University (Canada – Quebec), that led to the development of AVA Skills, a powerful engine in support of simulated human dialogue - based on thorough analysis of language structures, behavioural attitudes and Artificial Intelligence. 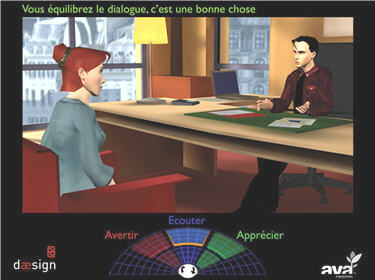 AVA Formation is the technology that establihes a dialogue between Autonomous Virtual Actors (AVA), is configurable in order to recreate a great variety of real-life situations, and is controlled by the trainee via an intuitive and friendly interface based on action thorugh intention.

It is being used for training in a variety of areas such as appraisal interviews, sales, recruitment, negotiation, leadership development, and project management. 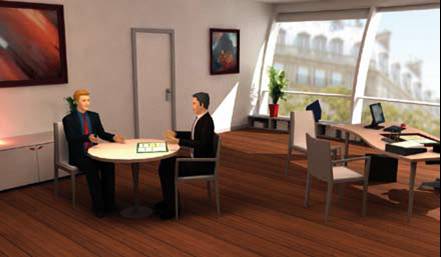 Major corporate clients such as Air France, AXA, BNP Paribas, Orange and Alcatel Lucent amongst others have adopted their Serious Games in training thousands of managers in Sales Techniques, Management Skills and Customer Services.

At BNP Paribas, for example, AVA has been used in preparation for the annual performance review sessions. The program comprises a complete “Knowledge Base” coupled with a unique simulated role-play that has led even the most senior managers to “playing” and enhancing their soft skills.

At Orange, they have built a comprehensive Call Centre training program covering all kinds of customer profiles and complaints.

In addition, workshops dealing with specific topics were also incorporated and delivered by virtual experts and trainers. The end result is a highly interactive game that can be replayed whenever you want.

The same way as an airline pilot can repeatedly train using a flight-simulator, their Customer Service Representatives can now enhance their dialogue skills at any time and at their own pace.

Have a taste of it!