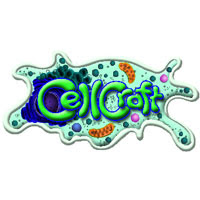 The Competition is funded by a MacArthur grant to the University of California, Irvine, and to Duke University and is administered by the Humanities, Arts, Science and Technology Advanced Collaboratory (HASTAC), a virtual network of learning institutions. The Competition is part of MacArthur’s $50 million digital media and learning initiative designed to help determine how digital technologies are changing the way young people learn, play, socialize and participate in civic life

Nineteen projects from around the world were awarded funding to explore digital media’s ability to help people learn, drawn from two categories: Innovation in Participatory Learning ($30,000 to $250,000) and Young Innovators ($5,000 to $30,000).

The Innovation in Participatory Learning category sought novel projects that used digital media to help learners of any age use new technologies to share ideas, comment upon one another's projects, and plan, design, implement, or simply discuss their goals and ideas together. Applications were accepted from Canada, China Japan, Mexico, the Netherlands, Nigeria, Russia, Singapore, South Africa, the United Kingdom, and the United States.

Young Innovators, a U.S.-only category for this year, accepted applications from individuals aged 18-25 to bring novel participatory learning ideas from the “garage” stage to full implementation and to think boldly about what comes next. Cellcraft: Exploring the Cell Through Computer Games was one of the recipients of the Young Innovator Award. Durham, N.C.'s Anthony Pecorella won a $25,000 grant for a Flash-based learning game that teaches kids about cellular biology

Addressing a decreasing interest and proficiency in the biological sciences among American teenagers, Cellcraft seeks to engage kids in ways that make biological principles personally meaningful and relevant.

Cellcraft will put middle and high school students in control of a cell, tasked with the job of coordinating all of the organelles in order to process food, create new parts, fight off viruses, and grow. 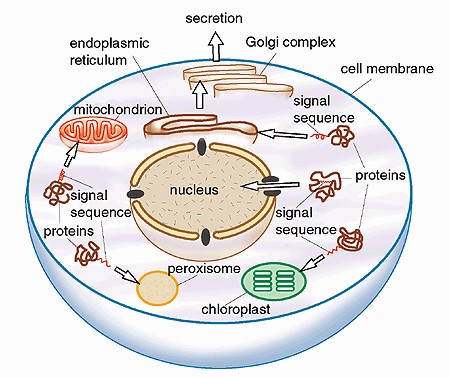 A large number of proteins carrying out essential functions are constantly being made within our cells. These proteins have to be transported either out of the cell, or to the different compartments - the organelles - within the cell.

The figure shows a schematic cell with some of its compartments, the organelles. (A chloroplast is an organelle that is present in plant cells but not in animal cells). The organelles have special functions and they are surrounded by membranes. Newly synthesized proteins are provided with special "address tags", signal sequences or topogenic signals, which direct the proteins to a correct place within the cell and allow them to cross the membranes of the organelles. The signal itself consists of a chain of amino acids. It is an integral part of the protein, and it is often located at one end of the protein.